What are Free Trade Agreements (FTAs) and why are they important?

FTAs are the arrangements between two or more trading alliances that primarily agree to lessen or dispose of customs tariff and non-tariff barriers on substantial trade between them. 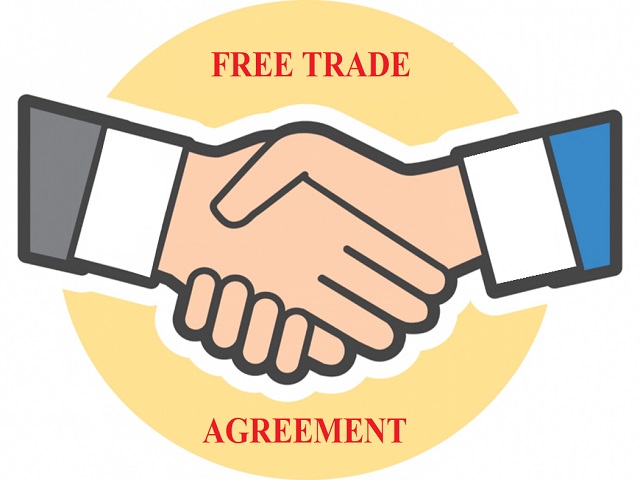 After a decade of negotiations, the Regional Comprehensive Economic Partnership (RCEP) was finally inked with the participation of 15 members countries including 10 ASEAN member nations along with Australia, China, Korea, Japan and New Zealand. It is to be noted that RCEP is the world's largest free trading agreement.

India had been a part of the negotiations for almost nine years till it pulled out in the year 2019 citing concerns which could adversely impact its manufacturing, agriculture and dairy sectors. However, the signatories of the deal stated that the door will remain open for India to join in the future.

Alongside this significant development, amid the ongoing COVID-19 pandemic, the Governments around the world are progressively resetting their ways to deal with trade arrangements. Thus, there have been discussions as to whether there is a need to rejig India's trade relations with the rest of the world by mending the country's Free Trade Agreement (FTA) strategy.

What are Free Trade Agreements (FTAs)?

Free Trade Agreements (FTAs) are the arrangements between two or more trading alliances that primarily agree to lessen or dispose of customs tariff and non-tariff barriers on substantial trade between them.

What are the key features of FTAs?

Key features of Free Trade Agreements (FTAs) are as follows:

1- The member nations of FTAs explicitly identify the duties and tariffs that are to be imposed on member countries when it comes to imports and exports.

2- FTAs typically cover trades in  (a) merchandise -- such as agricultural or industrial products (b) services -- such as banking, construction, trading and so forth (c) intellectual property rights (IPRs) (d) investment (e) government procurement (f) competition policy and so on.

3- FTAs additionally, for the most part, provide criterion called the ‘Rules of Origin (RoO)’, required for the determination of product's country of origin for the imposition of the preferential tariff on International trade.

Note: Rules of Origin (RoO) are enforced with the issuance of a Certificate of Origin (CoO) by authorized agencies of the trading partner.

4- FTAs act as an exception to the Most Favoured Nation principle adopted by WTO (World Trade Organization).

Significance of FTAs for India

1- India's smaller market size: India doesn't have a sufficiently big market size for the consumption of goods. Thus, exports have been a crucial component of the country's growth.

2- Opportunities for India in the post COVID world: (a) Structural changes such as ascend in remote learning, work from home and so forth has the potential to boost demand for India's tradable services. (b) Regardless of whether global imports of products grow slowly, India is small enough to gain market share, maintaining high rates of export growth. (c) India has gigantic potential to increment unskilled labour-based exports in India, particularly in sectors where China is rapidly surrendering space such as apparel, clothing, leather and footwear.

India and the FTAs

1- Aim: India's engagement with FTAs was to generate more trade and investment opportunities for the country.

4- Increase in exports: As per the Economic Survey Report (2019-20), FTAs have been beneficial for India. From 1993 and 2018, India’s exports of manufactured products grew at an annual average of 13.4% to nations with which it has trade agreements. During this period, the overall goods exports grew at an average of 10.9%.

5- Significant gains from SAFTA: Since 2006, India's exports to SAFTA (South Asian Free Trade Area) countries have expanded quicker than its imports from them, prompting a significant rise in trade surplus with these economies from about US$ 4 billion (in 2005-06) to US$ 21 billion (in 2018-19). It is to be noted that the maximum growth in exports has been recorded with Bangladesh and Nepal.

6- Increase in trade deficits with ASEAN, South Korea and Japan post-FTAs: After inking FTAs with these countries, India's imports increased more than it exported to these partner nations.

1- Tariff: India's obligation was to remove tariffs on 2% imports, tariff cuts it offered in its FTAs was in the scope of 74-86%, which didn't turn out feasible for India. It stands at a disadvantage in terms of industrial development and capacity of local industries to compete on global platforms with nations such as Japan and Singapore.

4- Services component: Due to the absence of Mutual Recognition Agreements (MRAs), India's performance under FTAs is hampered. It is to be noted that services are considered as the country's strong area. MRAs allows qualified personnel in one region to naturally meet all requirements for offering services in any partner country.

6- Spaghetti bowl impact: India has an FTA with Malaysia and Singapore separately while they are also a member of India ASEAN CECA.

Steps taken by India to strengthen the existing FTAs

1- Strengthening RoO mechanism: The Ministry of Finance, GOI recently announced the Custom (Administration of Rules of Origin under Trade Agreements) Rules, 2020 (CAROTAR 2020) to tighten the authorization of RoO standards under FTAs.

2- Bilateral Investment Treaties (BITs): In the year 2015, India reviewed its existing BITs and released a Model BIT in 2016. This revised model will be used for re-negotiation of existing investment chapters in CECAs/CEPAs/FTAs and
negotiation of future BITs.

3- Reviewing existing FTAs: In 2019, a meeting was held in Thailand where India and the ASEAN decided to initiate the review of the ASEAN-India Trade in Goods Agreement that has been in operation since January 2010.

3- The signatories of RCEP are:

5- RCEP is intended to reduce tariffs and red tape. The agreement does not focus on labour unions, environmental protection, or government subsidies.

6- The RCEP member nations make up around a third of the world's population and account for 29% of global GDP.

7- India was also part of the negotiations, but it pulled out in 2019 over concerns that lower tariffs could hurt local producers. However, the signatories of the deal stated that the door will remain open for India to join in the future.

8- The new free trade bloc will be bigger than both the US-Mexico-Canada Agreement and the European Union.

Why India pulled out of RCEP?

In 2019, India pulled out of RCEP over concerns which could adversely impact its manufacturing, agriculture, dairy sectors, etc. Other concerns are mentioned below:

2- Removal of MFN policy: India wanted the exclusion of MFN policy from RCEP. This was because India didn't want to give special favour to the nations with which it has border disputes such as China.

5- Service component: Most RCEP nations where India can export were not willing to negotiate wide-ranging disciplines in services that have the potential to create new market access for trade in services in this region.

6- Lack of Consensus on Rules of Origin: India was concerned about the possible circumvention of rules of origin, which helps in determining the national source of a product.