Bihar is a landlocked state in the eastern part of India. The Bihar plain is divided into two unequal halves by the river Ganga which flows through the middle from west to east. In this article, we have provided the geographical structure of India. 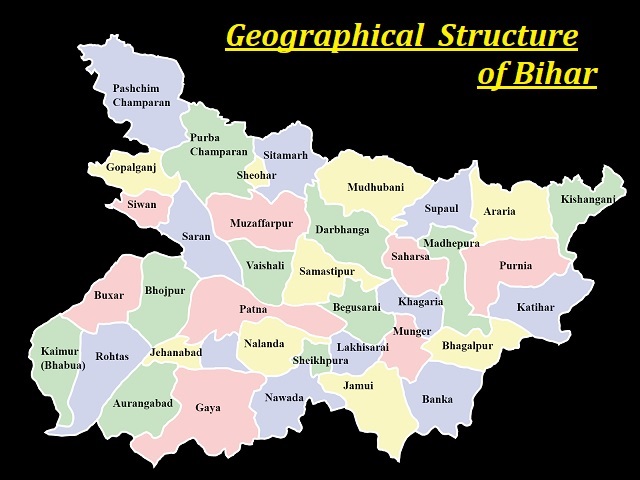 The Geographical Structure of Bihar is embedded with the younger geological structures in the North by Dharwarian rocks and older in the South by quaternary rocks. As far as the physiological structure is concerned, Bihar is consists of Terai in the North-West, Gangetic Plain in the center, and Plateau in the Southern region. Here, we are giving a brief outline of the Geographical and Physiological Structure of Bihar which will be helpful for the aspirants as a revision capsule to those who are preparing for competitive examinations like BPSC and other state-level examinations.

The Geology of Bihar corresponds to the balanced picture of the term geology because it is consists of younger (Tertiary Period) and older formation of rock (Pre-Cambrian period), and the plain was formed by filling up of a vast trough by the heavy loads of detritus carried by swiftly flowing rivers down the Southern slopes of newly uplifted Himalayas. List of Rocks Found in Geographical Land Areas of Bihar

Bihar is 13th largest state of India in terms of geographical area and constitutes only 2.86 % of the total land of India.

Climate and Soil Profile of Bihar

This range shadows the state from Northern part of West Champaran district over an area 32 km long and 6-8 km wide and it is divided into sub-divided into three parts on the basis of variation:

It is located between the Northern Mountains and the Southern Plateau region which is bounded by 150m contour line in the North as well as in the South. This plain is sub-divided into two parts on the basis of characteristics:

1. Northern Plain: It is located in East & West Champaran (Terai area with higher elevation), and Chaurs of Samastipur, Begusarai, Saharsa and Kathihar districts. Region is drained by Saryu, Gandak, Burhi Gandak, Bagmati, Kamla-Balan, Kosi and Mahanadi and their tributaries.

2. Southern Plain: It is narrow than northern plain of Bihar and triangular in shape because many hills are located in this region such as hills of Gaya, Rajgir, Giriak, Bihar Sharif, Sheikhpura, Jamalpur and Kharagpur hills.

It is located between Kaimur districts in the West to Banka in the East. It is made up of hard rock’s like gneiss, schist and granite. This region blessed with many conical hills which are made up of batholim like Pretshil, Ramshila and Jethian hill.