G-7 refers to the group of 7 highly industrialized nations—France, Germany, Italy, the United Kingdom, Japan, the United States and Canada. These countries hold an annual meeting to foster consensus on global issues like economic growth and crisis management, global security, energy, and terrorism. 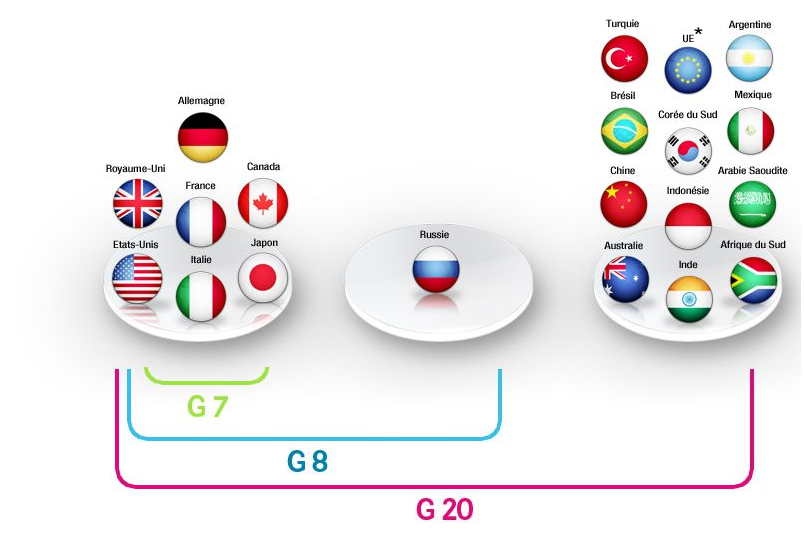 The first G-7 summit was held at the Rambonilet near Paris in November 1975. Currently the member countries of the G7 group account for 49% of global export, 51% of industrial output and 49% of assets in the international monetary fund. Now 45th meeting of G-7 held in the Biarritz, France between August 24–26, 2019.

The finance ministers of the G-7 countries in Sept, 1999 established the G-20 as an international forum to promote informal dialogue and cooperation among systematically important countries within the framework of Breton woods institutions system with a view to preserving international financial stability.

The Group of Twenty (G20) is the premier forum for its members' international economic cooperation and decision-making. It comprises 19 countries plus the European Union.

G20 leaders meet annually; additionally, during the year, Finance Ministers and Central Bank Governors meet regularly to discuss ways to strengthen the global economy, reform international financial institutions, improve financial regulation, and discuss the key economic reforms that are needed in each of the member countries.

Underpinning these meetings is a year-long programme of meetings between senior officials and of working groups coordinating policy on specific issues.

The G20 started in 1999 as a meeting of Finance Ministers and Central Bank Governors in the aftermath of the Asian financial crisis. In 2008, the first G20 Leaders' Summit was held, and the group played a key role in responding to the global financial crisis. Its decisive and coordinated actions boosted consumer and business confidence and supported the first stages of economic recovery. G20 leaders have met eight times since 2008

The G20 Summit continues to focus on measures to support global economic growth, with a strong emphasis on promoting job creation and open trade. Each G20 President invites a number of guest countries each year.

The members of the G20 are:

The G20 Presidency rotates annually according to a system that ensures a regional balance over time. Reflecting its nature as an informal political forum, the G20 does not have a permanent secretariat. Instead, the G20 President is responsible for bringing together the G20 agenda in consultation with other members and in response to developments in the global economy.

To ensure continuity, the Presidency is supported by a "troika" made up of the current, immediate past and future host countries. In 2015 the G20 Presidency is held by Turkey. During Turkey's host year, the members of the G20 troika are Turkey, Australia and China.

An important difference between characteristics of the G-20 from the G-7 is its greater participation from among both the industrialized countries as well as key emerging markets, thereby representing a wider range of viewpoints.