Explained: Gyanvapi Mosque Dispute and the Places of Worship (Special Provisions) Act of 1991

In this article, we have mentioned the timeline of the Gyanvapi Mosque dispute and the Places of Worship (Special Provisions) Act of 1991. 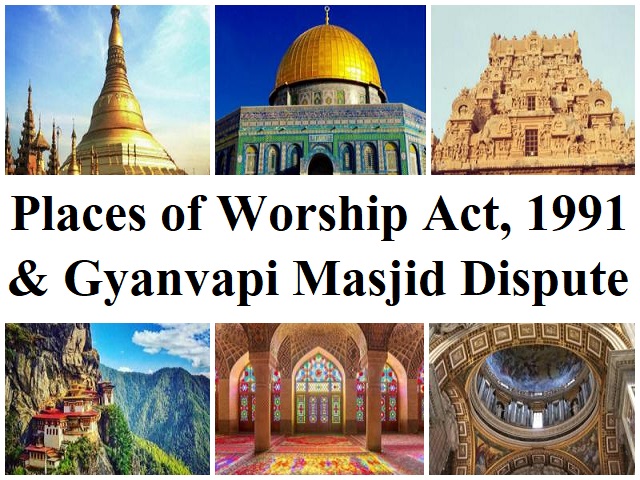 On 8 April 2021, a civil court in Uttar Pradesh directed the Archaeological Survey of India (ASI) to conduct a survey at the Gyanvapi mosque in Varanasi to find out whether it was built on the ruins of the temple or not.

The court also directed the UP Government to bear the cost of the survey, having two members of the minority community. The petition was opposed by the Anjuman Intezamia Masjid (AIM), the Gyanvapi Mosque Management Committee.

The devotees of 'Swayambhu Lord Vishweshwar' claim that the temple was demolished in 1669 on the orders of Mughal emperor Aurangazeb and the mosque was built on its ruins. The devotees want the land to be restored to Hindus for the construction of the temple.

The court has directed the following instructions to the ASI:

1- Artefacts must be properly preserved during the survey.

2- During the survey, the committee must take care that the Muslims are not prevented to offer namaz at the Gyanvapi Mosque. However, if the same is not practical due to the survey work, an alternative place to offer namaz shall be provided within the precincts of the mosque.

3- The committee must ensure that both Muslims and Hindus are equally respected keeping in view the sensitivity of the said matter.

4- The committee must submit its report in a sealed envelop to the court without any delay. The next hearing of the case is on 31 May 2021.

In 1984,  around 558 Hindus gathered in Delhi for the first religious parliament and decided for a nationwide call for Hindus to lay claim to the Holy shrines situated in Varanasi, Mathura and Ayodhya. Following the Ram Janma Bhumi-Babri Masjid dispute in 1990, the movement gained strength. While the call was to lay claim on some 3000 mosques in the aforementioned places, the Hindu religious groups focussed on two mosques-- (1) Shahi Idgah mosque, adjacent to Lord Krishna temple in Mathura and (2) Gyanvapi mosque, adjacent to Kashi Vishwanath temple in Varanasi.

This led to the enactment of the Places of Worship (Special Provisions) Act in 1991 by the then PV Narsimha Rao administration. However, the law was opposed by the BJP at that time (a minority in opposition), ridiculing that the law has been bought to fore to appease Muslims and keep their vote bank safe.

In 1991, the petition was filed by the advocate Vijay Shankar Rastogi on behalf of the main deity of the temple-- Swayambhu Jyotirlinga Bhagwan Vishweshwar. In his petition, Rastogi claims that the temple was constructed by  Maharaja Vikramaditya about 2,050 years ago where the present-day mosque stands. He demanded that the Gyanvapi mosque must be removed from the site and the possession of the entire piece of land must be given to Hindus along with the right to worship inside the mosque.

Furthermore, the petitioner contended that the Places of Worship (Special Provisions) Act, 1991 was not applicable in the Gyanvapi mosque case as it was built over a partly demolished temple.

In 1998, AIM Committee moved to Allahabad High Court and stated that the dispute could not be adjudicated upon by a civil court and cited Section 4 of the Places of Worship (Special Provisions) Act, 1991. Following this, the Allahabad HC put a stay order on the proceedings of the civil court and the matter was pending for 22 years.

In March 2019, Prime Minister Modi laid the foundation stone for the Kashi Vishwanath temple corridor to expand and beautify the temple and the area around it by embellishing it with Makrana marble, Kota granite, Mandana and Baleshwar stones. After the completion of the Rs. 1,000 crores project the temple can be directly seen from the Ganga ghat. In October 2019, as part of the work on the corridor, a contractor demolished chabootra near gate number 4 of the Gyanvapi mosque, leading to the flaring of communal tensions in the area. However, the broken structure was built overnight by the contractor after the protest by the local Muslims. The mosque belongs to the Sunni Central Waqf Board.

In December 2019, a month after the SC judgement on the Babri Masjid-Ram Janmabhoomi dispute, advocate Vijay Shankar Rastogi again filed a plea on behalf of the Swayambhu Jyotirlinga Bhagwan Vishweshwar seeking an archaeological survey of the Gyanvapi mosque. The advocate referred to himself as the 'next friend' of the main deity. He also stated that in 1998, the first additional district judge had directed a lower court to take evidence from the entire Gyanvapi complex to determine the religious status of the site but the Allahabad HC suspended the order of the lower court.

Despite the stay on the trial by the Allahabad HC, the Varanasi court ordered the ASI to conduct the archaeological survey on the said site.

It is to be noted that the Act extends to the whole of India except the state of Jammu and Kashmir.

3. Bar of Conversion of places of worship

4. Declaration as to the religious character of certain places of worship and bar of jurisdiction of courts, etc.

1- The religious character of a place of worship on 15 August 1947 shall continue to be the same as it existed on the aforementioned date.

If any suit, appeal or other proceeding is filed on the ground that the conversion has taken place in the religious character after 15 August 1947, is pending on the commencement of this Act, it will be disposed of in accordance with the provisions mentioned in sub-section (1).

a- Any place of worship which is an ancient and historical monument/ an archaeological site/ is under the Ancient Monuments and Archaeological Sites and Remains Act, 1958/ under any other law for the time being in force.

b- Any suit, appeal or other proceeding w.r.t. matter mentioned in sub-section (2), finally decided, settled or disposed of by the court, tribunal or authority before the commencement of this Act.

c- Any dispute related to the said matter settled by the parties among themselves before the commencement of this Act.

d- Any conversion of any such place effected before the commencement of this Act by acquiescence.

e- Any conversion of any such place effected before the commencement of this Act which is not liable to be challenged in any court, tribunal or other authority being barred by limitation under any law for the time being in force.

5. Act will not apply to Ram Janma Bhumi-Babri Masjid

Nothing mentioned in this Act will apply to Ram Janma Bhumi-Babri Masjid situated in Ayodhya in the State of Uttar Pradesh and to any suit, appeal or other proceeding relating to it.

6. Punishment under the Act

1- If any person contravenes the provisions of section 3 of this Act, he shall be punishable with imprisonment for up to three years and shall also be liable to a fine.

2- If any person attempts to commit any offence or cause any offence to be committed punishable under sub-section (1) but does not act towards the commission of the offence shall be punishable with the punishment provided for the offence.

3- If any person abets/ is a party to a criminal conspiracy to commit an offence under the sub-section (1), notwithstanding anything contained in section 116 of the IPC (45 of 1860) will be punishable with the punishment provided for the offence.