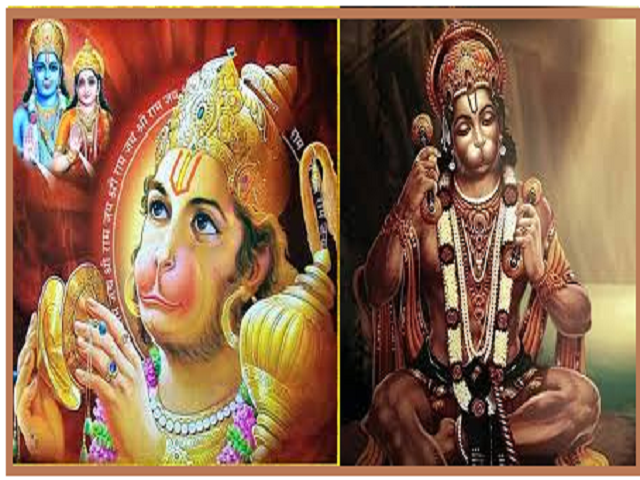 Lord Hanuman's birth anniversary is celebrated across the country as Hanuman Jayanti. In the present time, if a person wishes to get courage and strength in his life, he is advised to worship Lord Hanuman. This is because in Hindu mythology, Lord Hanuman is said to be the most powerful deity.

You will be surprised to know that Lord Hanuman also had five real brothers and all were married. It is mentioned in "Brahmana Purana". Purana contains a description of Lord Hanuman's father Kesari and his dynasty. It is also mentioned that Vanar Raj Kesari had 6 sons; the eldest son was Lord Hanuman. The names of the brothers of Lord Hanuman were Matiman, Shrutiman, Ketuman, Gatiman and Dhritiman respectively and they all had children. Therefore, their dynasty was several years old.

2. Pawanaputra Hanuman was the incarnation of Lord Shiva

Apsara "Anjana", who once lived in heaven, was cursed by a sage that when she loves someone, her face will become like a monkey. So she pleaded with Lord Brahma for help. By the grace of Lord Brahma, she took birth on earth as a human. Anjana later fell in love with Kesari, the king of the apes, and they both got married. Anjana was an ardent devotee of Lord Shiva and performed hard penance to please him. She wants a son like God Shiva in qualities as well as strengths, so she asked for a boon. God Shiva accepted it.

A few days later, when King Dasaratha was performing the Putrakameshti Yagna, after which the sage offered him a kheer to feed all his wives. Some Kheer of Rani Kaushalya's part took away by an eagle. When that eagle was flying with Kheer, at the signal of Lord Shiva, Vayu Dev dropped some portion of that Kheer on the hands of Anjana while meditating. Anjana gave it to Lord Shiva. Considered to have eaten the Prasad, as a result of which Anjana gave birth to Pawanaputra Hanuman, who is an incarnation of Lord Shiva.

3. The reason behind the Lord Hanuman’s name as "Bajrangbali"

Once, seeing Goddess Sita applying sindoor, Lord Hanuman asked her "why does she apply it on her forehead”. To this Goddess Sita replied that "since Shri Ram is her husband, I apply sindoor to wish her long life." Lord Hanuman thought that if Goddess Sita applied a little sindoor on her forehead, the age of Sri Ram can be prolonged, then if I apply it on the whole body, the life of Shri Ram will increase manifold. Thinking this, he applied sindoor all over his body. As sindoor is also called "Bajrang", from that day onwards Lord Hanuman came to be called as "Bajrangbali" and that is why whenever he is worshipped sindoor is offered to him.

In the Sanskrit language, "Hanu" means "jaw" and "mana" means "disfigured". Do you know that the childhood name of Lord Hanuman was "Maruti? Once in childhood, Maruti ate Lord Surya as a fruit. It caused darkness in the entire world. Lord Indra became angry by the incident, he struck the child Maruti with a thunderbolt that broke his jaw and he became unconscious. After this incident, Hanuman lost his jaw forever.

5. Despite being a Brahmachari, Lord Hanuman was the father of a son

You will be surprised to know that despite being a Brahmachari, Lord Hanuman was the father of a son. The name of Lord Hanuman's son was "Makardhwaja". After burning the whole Lanka with his tail, Hanuman dipped in the sea to cool off his body. It is said that his sweat was swallowed by the fish and thus Makardhwaja was conceived and born to a mighty fish of the same name.

6. Once Lord Rama issued a death sentence to Lord Hanuman

Once Narada told Hanuman to greet all the sages except Vishwamitra because he was also a king once. Vishwamitra was very angry with this and asked Lord Rama to give the death penalty to Hanuman. Since Vishwamitra was Lord Rama's Guru, so he could not ignore his order and punished Hanuman to death by arrows. Seeing the arrows are coming towards him, Hanuman started chanting Ram! Seeing this Lord Rama used Brahmastra but everyone was surprised because it was also failed due to Ram chanting. After seeing this, Narada went to Vishwamitra and confessed his mistake for stopping the ordeal.

7. Lord Hanuman and Bhima were both brothers