Ram Janmabhoomi: Ayodhya is one of the holiest cities in India and is the birthplace of Lord Rama. Let us have a look at some historical facts about Ayodhya. 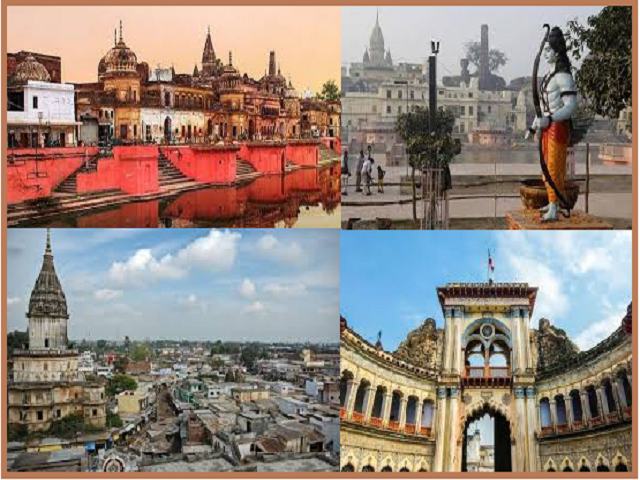 Ram Janmabhoomi: Ayodhya, the birthplace of Lord Rama and is a great place to take a plunge into the pool of spirituality. It consists of several temples and is also one of the most venerable cities of ancient India. There is an ancient belief that the gods themselves created the city. It is situated on the banks of the holy river Saryu and is the headquarter of Ayodhya District and Ayodhya division. It forms a municipal corporation with Faizabad.

District at a Glance

1. Ayodhya is known as Saket which is an ancient city of India. It is associated with the great epic Ramayana with the birth of Lord Rama and with the rule of his father, Dasharatha. As per the source, the town was prosperous and well fortified with a large population.

2. In traditional history, Ayodhya was the early capital of the kingdom of Kosala. The capital city of Kosaldesh was ruled by various eminent kings such as Ikshvaku, Prithu, Mandhata, Harishchandra, Sagar, Bhagirath, Raghu, Dileep, Dashrath and Ram. In Buddhist times around the 6th-5th century, BCE Shravasti became the kingdom's chief city. According to some scholars, Ayodhya is identical to the town of Saketa, the place where Buddha is said to have resided for a time.

3. During the 11th and 12th century CE, the Kanauj kingdom arose in Ayodhya, then called Oudh or Awadh. Later, the region was included in the Delhi Sultanate, the Jaunpur kingdom, and in the 16th century, the Mughal Empire.

4. The city of Ayodhya, situated on the bank of the Saryu River, is filled with relics of ancient times. Originally Faizabad city is known as Fyzabad. The foundation of the city was laid by Saadat Khan, the second Nawab of Awadh about two and a half centuries back it lies 7 km from the town of Ayodhya. From the time of Nawabs, keeping alive the traditions and the heritage this place can be visited for various tourist attractions like Moti Mahal, Gulab Bari, and the tomb of Bahu Begum.

5. The long line of ghats on River Saryu was constructed by Raja Darshan Singh in the first part of the 19th century. The bank of the river consists of beautiful temples dedicated to Sita-Ram and Narasingh, further, the sanctity of the place has enhanced the shrines of the Chakrahari and the Guptahari.

6. As per the Hindu legend, the mythic man Manu founded Ayodhya, as recorded in the Hindu epic Ramayana. Later, it became the capital of the Suryavanshi (Sun) dynasty of which the most celebrated king was Lord Rama.

7. References of Ayodhya are also contained in the Athar Veda. Also, Jain traditions claim that five Tirthankaras were born at Ayodhya.

8. Ayodhya or Awadhpuri, the birthplace of Lord Rama has been regarded as the first one of the seven most important pilgrimage sites or Mokshdayini Sapt Puris for Hindus.

Therefore, Ayodhya is an ancient town and is regarded as one of the seven sacred cities of the Hindus. It is also called Oudh or Awadh, a town, south-central Uttar Pradesh state in Northern India.