What is giant Antarctic Iceberg A68a?

A68a is a giant iceberg that calved from the Antarctic in 2017 and has been floating off the coast of South Georgia island. Let us read more about giant Antarctic iceberg A68a. 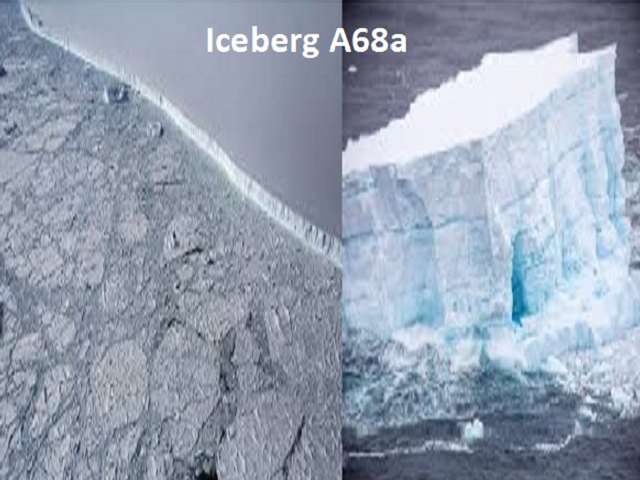 A68a is a giant iceberg that calved from the Antarctic in 2017 and has been floating off the coast of South Georgia island. This has generated fear about the impact the iceberg could have on the island's abundant wildlife.

This year because of an ocean current the iceberg was pushed into the South Atlantic Ocean and since then it has been drifting towards the remote sub-Antarctic island of South Georgia.

What is an iceberg?

It is ice that broke off from the glacier or shelf life and floats in open water. It travels with ocean currents. It either gets caught up in shallow waters or ground themselves. The only organisation that names and tracks Antarctic Icebergs is the US National Ice Center (USNIC).

How are iceberg named?

They are named according to the Antarctic quadrant in which they are spotted.

In 2017, an iceberg A68a approximately the size of the state of Delaware, split off from Antarctica's Larsen C ice shelf. Since then it has been drifting towards the remote island of South Georgia which is known as British Overseas Territory (BOT).

Smaller icebergs have calved from the iceberg on their journey and the iceberg's biggest section is known as A68a. It spans the area of roughly 26,00 sq. km.

Recently, USNIC has named two icebergs that have been calved from A68a and they are known as A68e and A68f.

The Southern Atlantic Circumpolar Current Front are the fragments of the berg that are entrained in a fast-moving stream of water. Further, the most important current in the Southern Ocean is known as the Antarctic Circumpolar Current (ACC). It is the only current that flows around the globe. It encircles the Antarctic continent and flows eastward via the southern portions of the Atlantic, Indian, and Pacific Ocean.

What is the fear regarding this iceberg?

The fear related to the iceberg is that if it grounds itself near the island then it could cause disruption to the local wildlife that forages in the ocean. According to the ecologists from the British Antarctic Survey (BAS), if the iceberg gets stuck near the island then penguins and seals will have to travel farther in search of food and for some this might mean that they don't get back time to prevent their offspring from starving to death.

It is also said that if an iceberg stuck in the open ocean and carries dust which fertilizes ocean plankton and helps in drawing up carbon dioxide from the atmosphere.

What is the reason behind the iceberg calve?

According to the BAS, the calving of an iceberg is a natural event and is not a result of climate change. According to some predictions, a warming Antarctica in the future could mean more calving events because of ice shelves and glaciers retreat.

In the end, let us study calving

It is the glaciological term for the mechanical loss of ice from a glacier margin. When a glacier flows into water, calving is most common but can also occur on dry land where it is called dry calving.

How are Icebergs named?

The US National Ice Center (USNIC) is the only organization that names and tracks Antarctic Icebergs. They are named according to the Antarctic quadrant in which they are spotted.

On the journey, smaller icebergs have calved from the iceberg and the biggest section of the iceberg is called A68a and spans an area of roughly 2,600 sq. km.

It is the world's largest Iceberg roughly the size of the state of Delaware, split off from Antarctica’s Larsen C ice shelf in 2017.

What is a Glacier mass balance?

It is simply the gain and loss of ice from the glacier system.

What is the calving of glaciers?

It is the glaciological term for the mechanical loss (or simply, breaking off) of ice from a glacier margin.
Comment ()