September, the ninth month of the year. The original name of the month is kept from the Roman calendar where it was the seventh month that is Septem means seven in Latin. Let us have a look at the events, festivals, etc. that fall in the September month and celebrated at the national and international levels. 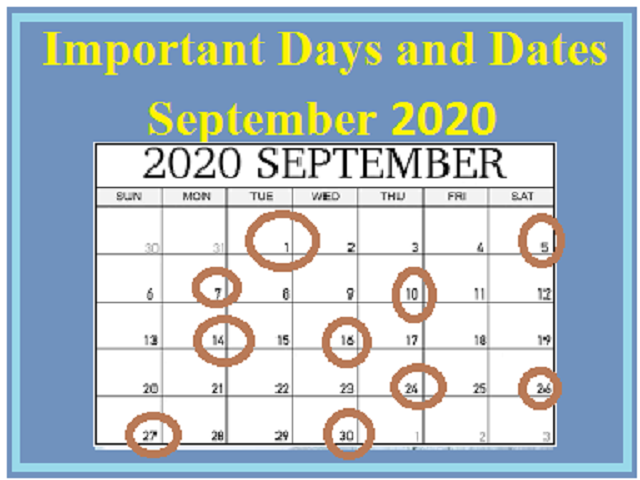 September 2020: The birth flowers of the people born in September are the forget-me-not, morning glory, and aster. The birthstone is the sapphire which symbolises clear thinking. India is a land of festival. People live in unity. Every day is celebrated here. Important Days, dates and events (national or international) of September 2020 are provided below which will increase your general knowledge and also help in the preparation of various competitive examinations.

India is a constitutional republic country that consists of 29 states and Union territories with New Delhi as India's capital. It is the second most populous country after China. No doubt India is a land of diversity which has a mix culture of eastern values and western freedom. India has Himalayan ranges, Ganga, the sacred river, mountains and has a history of great philosophers like Swami Vivekananda, Ramkrishna Paramhansa etc. Therefore, various festivals and events are celebrated together by the people.

National Nutrition Week is observed from 1st September to 7th September to provide knowledge among people about the importance of nutrition and its importance for the human body, for better health.

On 2nd September, 1945 Japan surrendered aboard the U.S.S Missouri, anchored in Tokyo Bay and so, Victory over Japan is celebrated on 2nd September.

World Coconut Day is observed on 2nd September every year to make people aware about the importance of this crop in poverty reduction. This day also commemorate the formation day of Asian Pacific Coconut Community (APCC).

This year the Onam festival began on 22 August and will be concluded on 2 September. It is a 10-day festival. Onam is the harvesting festival and marks the homecoming of the mythical King Mahabali. People across the state Kerala celebrate this festival with joy. Celebrations include boat races, martial arts, music, plantain offerings, folk songs, etc.

Skyscraper Day is observed on 3rd September every year to commemorate the birthday of the famous architect William Can Aien who is genius in constructing the Chrysler Building which is one of the iconic landmark in New York city. This day marks the ability of the man to construct industrial masterpiece.

International Day of Charity is observed on 5 September every year to eradicate poverty in all its forms and dimensions to achieve sustainable development goals.

Teachers' Day in India is celebrated on 5 September every year to mark the birth anniversary of India's second President Dr. Sarvapalli Radhakrishnan. On this day we appreciate and acknowledge the efforts of teachers in making responsible individual.

International Literacy Day is observed on 8 September every year to make people aware about the importance of literacy which no doubt is a matter of dignity and human rights. Let us tell you that it is key component of the UNs Sustainable Developmental Goals.

World Physical Therapy Day is observed on 8 September every year to provide an opportunity for physical therapists from all over the world to raise awareness about the important contribution of the profession and in improving the well being and health of the people.

World First Aid Day is observed on 14 September to raise awareness among public about how first aid can save lives in case of crises. According to the International Federation, first aid should be accessible to all people and should be an important part of the developmental societies.

Hindi Diwas is celebrated on 14 September as on this day the Constituent Assembly of India had adopted Hindi written in Devanagri script in 1949 as the official language of the Republic of India.

Engineer's Day is celebrated in India on 15 September every year to mark the tribute to the Indian Engineer Bharat Ratna Mokshagundam Visvesvaraya.

International Day of Democracy is observed on 15 September to remind people that democracy is about people. This day provides an opportunity to make people understand the importance of democracy and the effective realisation of Human Rights.

Malaysia Day is celebrated on 16 September and is also known as 'Hari Malaysia'. On 16 September, 1963, the former British colony of Singapore and the East Malaysian states of Sabah and Sarawak joined the Federation of Malaya to generate the Malaysian Federation.

World Ozone Day is observed on 16 September annually. On this day in 1987, the Montreal Protocol was signed. Since 1994, World Ozone Day is celebrated which was established by the United Nations General Assembly. This day reminds people about the depletion of the Ozone Layer and to find solutions to preserve it.

What is Ozone Pollution and how it affects health?

International Talk Like a Pirate Day is celebrated on 19 September annually. In 1995, it was celebrated the first time. This day encourages people to talk and dress like the sea plunderers of yesteryears.

World Alzheimer's Day is observed on 21 September to raise awareness among people about the challenges that the patient faces due to dementia. In 2012, World Alzheimer's Month was launched.

Rose Day is observed on 21 September for the welfare of cancer patients or we can say that this day marks the hope for cancer patients that cancer is curable. This day is celebrated in the memory of a 12-year-old Melinda Rose of Canada, who when diagnosed with a rare form of blood cancer and did not give up hope.

European Day of Languages is celebrated on 26 September annually to promote awareness among the public about the importance of language learning and protecting the heritage of the language.

Day of Deaf or International Week of Deaf starts on the last week of September and ends on the last Sunday of the month. It is also known as World Day of Deaf. This day draws attention not only to the affected person but also to the general people, politicians, and development authorities towards the achievements and challenges faced by the community of the deaf people.

World Contraception Day is observed on 26 September annually. It is a global campaign to improve awareness about the contraceptive methods available and enable young people to make informed decisions regarding their sexual and reproductive health.

World Maritime Day is observed on 24 September to raise awareness about the United Nation's Sustainable Development Goals (SDGs) and to showcase the work that the International Maritime Organization (IMO) and its Member States are undertaking to achieve the targets. The theme of this year is "Sustainable shipping for a sustainable planet."

World Tourism Day is annually celebrated on 27 September to highlight the importance of tourism which helps in generating employment and build a future for millions of people around the world.

World Rabies Day is observed on 28 September every year to make people aware of the prevention regarding rabies and to highlight the progress in defeating this horrifying disease.

International Day For Universal Access To Information (IDUAI) 2020 is observed on 28 September every year. The day focuses on the right to seek, receive, and impart information.

World Heart Day is observed annually on 29 September. This day informs people about heart disease and stroke which is the world's leading cause of death.

International Translation Day is observed on 30 September every year. This day provides an opportunity to pay tribute to the work of language professionals. It also plays an important role in making nations together and strengthens world peace and security.

World Rivers Day is celebrated on the last Sunday of September. In 2020, it falls on 27 September. The day highlights the importance of rivers and generates awareness and encourages people to improve and save water, rivers around the world. It is necessary to care for our water resources.

So, these are the National and International important Days in September 2020 which may also help in the preparation for several exams and also enhance your general knowledge.