The Motion requires force to cause that change. It is the process of moving, changing place or position. There are various laws and concepts related to motion which will be useful in understanding the various phenomena held in our daily life. This article deals with various concepts and examples of motion. 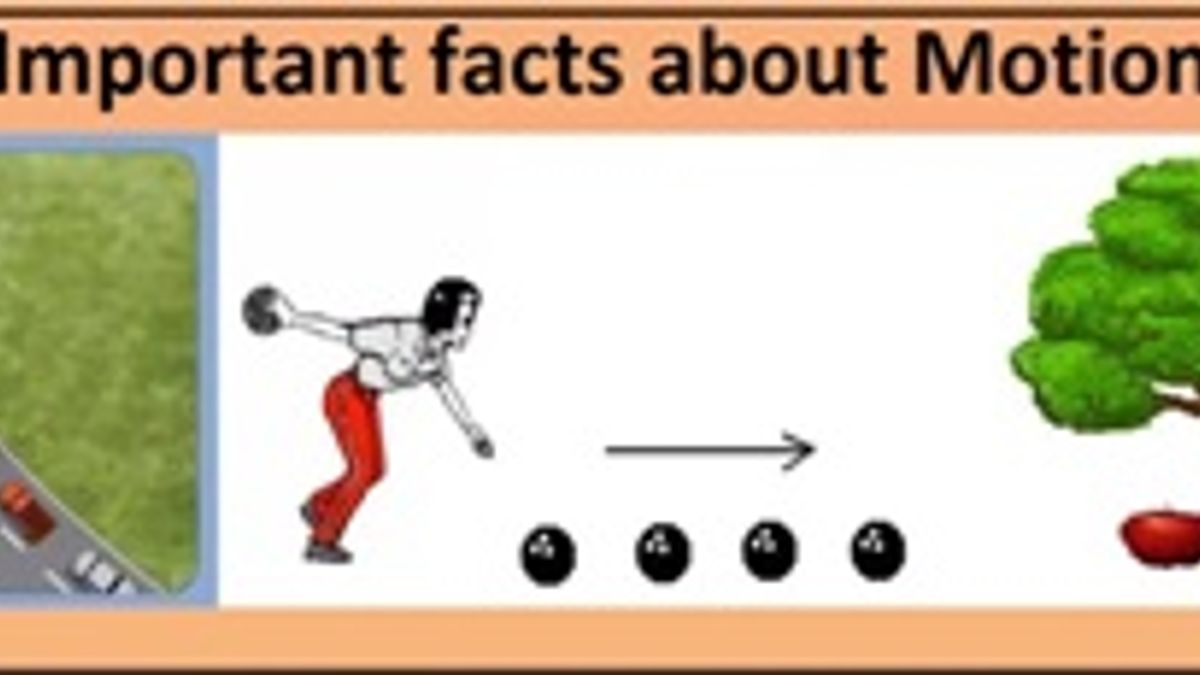 Motion is movement of an object from one place to another or we can say it is the process of moving, changing place or position. Motion requires force to cause that change. The time you take to travel the distance depends upon speed; the distance travelled is measured as the length of a line between the start and end of a motion. It is an important aspect in physics. In our lives motion is important and impacts so many things that we do. Mostly, when we think about motion we often think of cars, bicycle, aeroplane flying etc. This article deals with some important terms or concepts related to motion with examples.
Concept and Facts related to Motion
1. Scalar Quantities: Those physical quantities which have magnitude only and no direction.
Example: Mass, speed, volume, work, time, power energy etc.
2. Vector Quantities: Those physical quantities which have magnitude and direction both and also, obey triangle law.
Example:  Displacement, velocity, acceleration, force, momentum etc.
3. Distance: It is the length of actual path covered by a moving object in a given time interval. It is a scalar quantity and is always positive.
4. Displacement: It is the shortest distance covered by a body in a definite direction. It is a vector quantity and maybe it is negative, positive or zero. In general, magnitude of displacement is less than equal to distance.
5. Speed: Distance travelled by a moving object in unit time interval. Its S.I unit is metre per second or m/s. It is a scalar quantity.
Speed = Distance/Time

What is the difference between Uniform and Non-Uniform Motion?
6. Velocity: It is the displacement of an object in unit time interval. Its S.I unit is metre per second or m/s. It is a vector quantity.
Velocity = Displacement/ Time
7. Acceleration: The rate of change of velocity of the object. It is a vector quantity. Its S.I unit is metre/second square or m/s2. If velocity decreases with time then acceleration is negative and is known as retardation.
Acceleration = Change in velocity/ Time
8. Circular Motion: If an object describes a circular path its motion is known as circular motion. If the object moves with uniform speed, then its motion is known as uniform circular motion.
9. Angular Velocity: The angle subtended by the line joining the object from the origin of circle in unit time interval. It is denoted by omega.
Newton the father of physics established the laws of motion in his famous book “Principia” in 1687.
10. Newton’s First Law of Motion: Every body maintains its initial state of rest or motion with uniform speed on a straight line unless an external force acts on it. This law is also known as law of Galileo or law of inertia.
11. Inertia: It is the property of a body by virtue of which the body oppose change in its initial state of rest or motion with uniform speed on a straight line. It is of two types: Inertia of rest and Inertia of motion. For example: When a car or train starts suddenly, the passenger's bends backward.
Newton’s first law also define force.
12. Force: It is that external cause which when acts on a body changes or tries to change the initial state of the body.
13. Momentum: It is the property of a moving body and is defined as the product of mass and velocity of the body. It is a vector quantity and its S.I unit is Kgm/s.
Momentum = mass x velocity

What is momentum and its importance in everyday life?
14. Newton’s Second Law of Motion: The rate of change of momentum of a body is directly proportional to the applied force on the body and takes place in the direction of force. This law gives the magnitude of force.
Force = mass x acceleration
15. Newton’s Third Law of Motion: To every action, there is equal and opposite reaction. For example: recoil of a gun, motion of rocket, swimming etc.
16. Principle of conservation of linear momentum: If no external force acts on a system of bodies, the total linear momentum of the system of bodies remains constant. Therefore, the total linear momentum of bodies before and after collision remains the same.
17. Impulse: When a large force acts on a body for very small time, then force is called impulsive force. It is also defined as the product of force and time. It is a vector quantity and its direction is the direction of force. Its S.I unit is Ns.
Impulse = force x time = change in momentum
18. Centripetal Force: When a body travels along a circular path, its velocity changes continuously. Naturally an external force always acts on the body towards the centre of the path. For better understanding, the external force required to maintain the circular motion of the body is called centripetal force.
F = mv2/R where m is mass moving on a circular path of radius R with uniform speed v.
19. Centrifugal Force: There are some forces which cannot be assigned to any object in the surrounding. These forces are called pseudo force or inertial force. Centrifugal force is such a pseudo force. It is equal and opposite to centripetal force. For example: cream separator, centrifugal drier work on the principle of centrifugal force.
20. Moment of Force: The rotational effect of a force on a body about an axis of rotation. It is measured as the product of magnitude of force and the perpendicular distance of direction of force from the axis of rotation. It is a vector quantity. Its S.I unit is Newton metre or Nm.
Moment of force = Force x moment arm
21. Centre of Gravity:  The centre of gravity is that point through which the entire weight of body acts. The centre of gravity of body does not change in orientation of body in space.
22. Equilibrium: If the resultant of all the forces acting on a body is zero then the body is said to be in equilibrium. Therefore, id a body is in equilibrium then it will be either at rest or in uniform motion. If it is at rest, the equilibrium is called static, otherwise dynamic. It is of three types.
a. Stable Equilibrium: If on slight displacement from equilibrium position, a body has tendency to regain its original position.
b. Unstable Equilibrium: If on slight displacement from equilibrium position, a body moves in the direction of displacement and does not regain its original position. In this equilibrium, the centre of gravity of the body is at the highest position.
c. Neutral Equilibrium:  If on slight displacement from equilibrium position a body has no tendency to come back to its original position or to move in the direction of displacement. In this, the centre of gravity always remains at the same height.
From the above article we have learnt various concepts with examples related to motion.

How Gravitational Force holds the Solar System together?