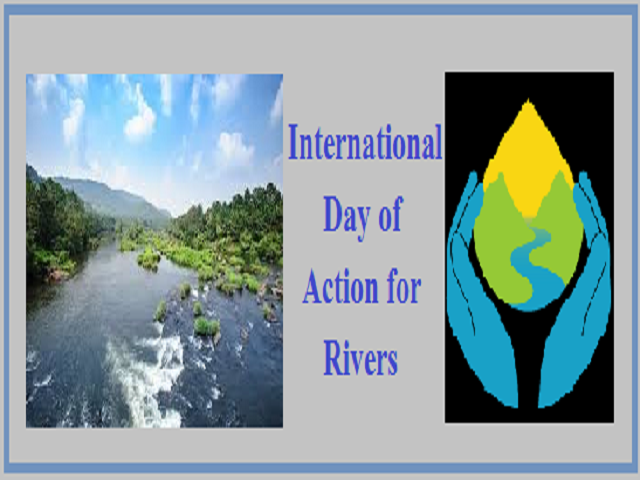 International Day of Action for Rivers

It is a day when diverse communities and individuals around the globe come together to raise voice against the destructive water development projects, health and sustainable management of the watersheds. The day was earlier known as International Day against Dams, for Rivers, Water, and Life. In India also several projects are started for the conservation of rivers or against dam construction. The Narmada Bachao Andolan was one of them.

The International Day of Action for Rivers 2020 theme is “Women, Water, and Climate Change”. As last year around 100 women from 32 countries provided their efforts to protect and defend rivers. They gathered at the first Women and Rivers Congress with a message:

"In this time of climate crisis, floods and droughts, and growing water scarcity, protecting rivers and people are ever more urgent. We honor the women who have given their lives in the struggle to save our rivers for all who depend on them. We stand on the shoulders of women who have long been leaders in this movement. We join hands with local and indigenous communities who continue to face enormous peril in safeguarding their water and territories.

We commit to continuing our fight to protect free-flowing rivers and the lands, forests, and territories they sustain, to ensure women’s leadership in decision-making at all levels over freshwater resources, and to strengthen and build alliances and grow our movement – for the future of ourselves as women, our families and communities, our rivers and our planet."

The participants of the First International Meeting of People Affected by Dams held in March 1997 in Curitiba Brazil adopted the International Day of Action Against Dams and For Rivers, Water and Life. 20 countries representatives had decided that the International Day of Action would take place on 14 March Brazil's Day of Action Against Large Dams. The main objective behind generating this day is to raise voices in unison against destructive water development projects, reclaim the health of watersheds and demand for equitable and sustainable management of our rivers.

On 14 March, 2020, 22nd International Day of Action for Rivers will be celebrated.

It is to be noted that the World Health Organisation (WHO) on 11 March, 2020 declared COVID-19, a global pandemic. Therefore, to keep communities safe, International Rivers advised to cancel in-person events and switched to online/at-home alternatives.

Ways to celebrate are as follows:

- To launch a photo campaign. Ask your friends, group supporters to post a photo of your favourite river with themselves or a photo of yours by holding a sign about a river, while using hashtags #DayofActionforRivers and #RiversUniteUs.

- To organise a "remote" phone banking party! That is to give a call to your network or group supporters targeting public officials with your events call-to-action.

- Invite your friend’s family members and throw a party to celebrate the importance of rivers.

- To honour the rivers, you can organise a personal prayer ceremony, ritual and any other grounding exercise that you feel to do, etc.

International Rivers with time developed a series of regional and national networks of dam-affected people and their allies. Some of them are listed below:

Africa: In Africa, the African Rivers Network (ARN) a network of dam affected peoples and NGOs are working on river and dam related issues. The goal of ARN's is to promote solidarity among member groups; amplify the voices of participants, continent-wide discussions; and to promote the recommendations of the World Commission on Dams (WCD) mainly for more participatory methods of dam planning. The first meeting of ARN's was held in 2003 focused on illustrating the need for a grassroots river-issues network. Let us tell you that International Rivers is an active member of ARN.

Southeast Asia-Mekong: Several civil society organisations, academics, and community movements in Mekong region from Burma, Cambodia, Thailand, and Vietnam have built determined coalitions at the national level and worked towards defending the region's rivers. It is also supported at a global level. International Rivers throughout the Mekong region works with groups and support their efforts to protect its life-giving rivers.

South Asia: HYPHEN comprises the Himalayan and Peninsular Hydro-Ecological Network. It was established in 2007 and its aim is to work on dam projects in countries including Afghanistan, Bangladesh, Burma, Bhutan, China, India, Maldives, Nepal, Pakistan, and Sri Lanka. The work of Hyphen is to provide training, conducts research and campaigns for the conservation of Himalayan and Peninsular rivers, coasts and wetlands, and also addressed the problem of climate change.

North America: Since 1973, American Rivers has protected or restored more than 150,000 miles of rivers throughout the U.S.

Therefore, the International Day of Action for Rivers is observed on 14 March to raise awareness about the importance of rivers and to raise voice to conserve rivers and work towards sustainable development.