International Religious Freedom Report 2021: India should be a 'Country of Particular Concern'

The USCIRF has recommended putting India on a list of CPCs or Countries of Particular Concern for the second year in a row due to the violations of religious freedoms in the year 2020. 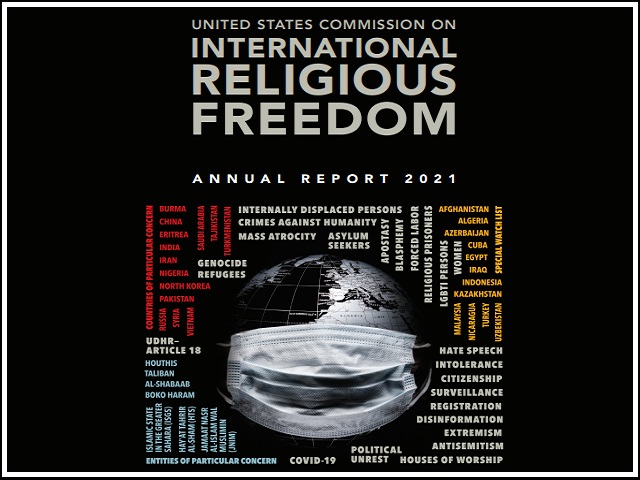 The United Nations Commission on International Religious Freedom (USCIRF) has recommended putting India on a list of CPCs or Countries of Particular Concern for the second year in a row due to the violations of religious freedoms in the year 2020. Earlier, in its 2020 Human Rights Report, the US State Department pointed out several Human Rights issues in India.

Key Findings of USCIRF for India:

The report stated that religious freedom conditions in India continued their negative trajectory in 2020. The report highlighted that the present government led by Bhartiya Janata Party (BJP) promoted Hindu nationalist policies which resulted in systematic, ongoing, and egregious violations of religious freedom.

1- Citizenship Amendment Act (CAA): In early 2020, the government passed CAA which is a fast track to citizenship for non-Muslim migrants from Afghanistan, Bangladesh, and Pakistan residing in India. The country witnessed widespread protest against the religiously discriminatory Citizenship (Amendment) Act (CAA) and state and non-state violence, largely targetting Muslims.

2- Delhi Riots: The national capital witnessed the worst Hindu-Muslim mob violence in more than three decades, leaving over 50 dead and 200 injured. The report further stated that the mobs sympathetic to Hindu nationalism operated with impunity, using brutal force to single out Muslims, attack mosques, and destroy homes and businesses in majority-Muslim neighbourhoods. As per Delhi Minorities Commission, the violence and allegations of police brutality and complicity were 'seemingly planned and directed to teach a lesson to a certain community which dared to protest against a discriminatory law'.

3- National Register of Citizens (NRC): The USCIRF in its report underscored that in conjunction with the proposed NRC, CAA could subject Muslims, in particular to statelessness, deportation or prolonged detention. In 2019, statewide NRC was implemented in the northeastern state of Assam. It excluded around 1.9 million residents (both Hindus and Muslims) from the citizenship register. The major area of concern is the large detention camp being built in Assam and the potential impact the said law may have if extended nationwide.

4- Anti-conversion Law in Uttar Pradesh: In late 2020, UP Government passed an ordinance to void any marriage conducted for the sole purpose of unlawful conversion or vice-versa. Inflammatory campaigns decrying interfaith relationships were launched, leading to attacks and arrests of non-Hindus and to innuendo, suspicion, and violence toward any interfaith interaction

Similar legislations are being pushed in states such as Haryana, Assam and Karnataka while it is approved in Madhya Pradesh.

5- Foreign Contribution Regulation Act (FCRA): In September 2020, the Indian Parliament amended the FCRA, imposing restrictions on NGOs, leading civil socities, religious and human rights organizations to shut down. UAPA and other legislations were used by the government to detain advocates, media and academics, including religious minorities. In recent years, the FCRA licenses of hundreds of NGOs were revoked or suspended by the government.

6- Dissemination of false information: At the beginning of the COVID-19 pandemic, government officials and non-state actors continued to harass and spread hatred and disinformation against minority communities, including Muslims, Christians, and Dalits. Also, images with false information on social media implicated religious communities in cow slaughter and other alleged offences. This resulted in more than 120 cases of violence.

1- It has recommended the US government to designate India as a CPC for engaging in and tolerating systematic ongoing, and egregious religious freedom violations.

2- The US Government must impose targeted sanctions on individuals and entities responsible for severe violations of religious freedom by freezing those individuals’ or entities’ assets and/or barring their entry into the United States.

3- It has recommended the US administration advance the human rights of all religious communities in India and promote religious freedom, dignity and interfaith dialogue through bilateral and multilateral
forums and agreements.

5- The US Congress should continue to raise religious freedom concerns in the U.S.-India bilateral relationship by hosting hearings, writing letters and constituting Congressional delegations.

Article 25: Freedom of conscience and free profession, practice and propagation of religion.

Article 27: Freedom as to payment of taxes for promotion of any particular religion.

Article 28: Freedom as to attendance at religious instruction or religious worship in certain educational institutions.

Article 29: Any citizen/section of citizens having a distinct language, script or culture have the right to conserve the same. No discrimination would be done on the ground of religion, race, caste, or language.

Article 30: All minorities, whether based on religion or language, shall have the right to establish and administer educational institutions of their choice.