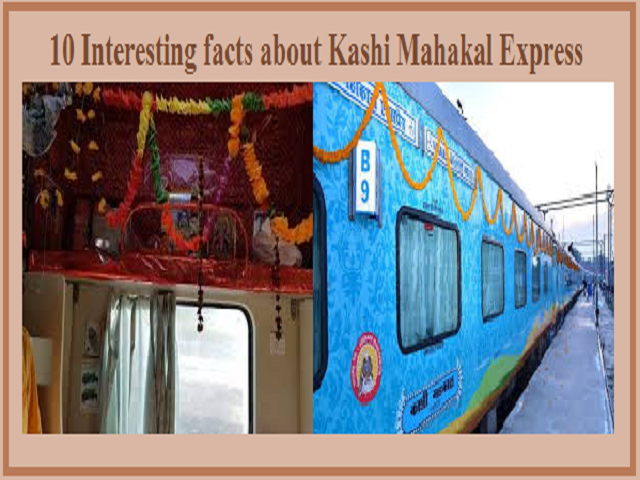 Kashi Mahakal Express links three Jyotirlingas i.e. a devotional representation of Shiva in two states UP and MP with a seat specifically reserved for Lord Shiva. This is Indian Railway Catering Tourism Corporation's (IRCTC) third launch after two Tejas Express trains.  The two Tejas Express trains run between New Delhi-Lucknow and other from Mumbai-Ahmedabad. And now, Kashi Mahakal Express is the third one that will run between Varanasi and Indore.

1. The first interesting thing about the train is as the name suggests the train is dedicated to Lord Shiva and has a reserved seat. This is for the first time that a seat has been left reserved for a deity. The number of the seat is 65 and the coach is B5. On the seat of the train, the temple has been drawn to make people aware that the seat is reserved for Lord Mahakal.

2. The train derives its name from the three Jyotirlinga pilgrim centres.

3. The Kashi Mahakal Express will cover three places in two states namely Jyotirlinga-Omkareshwar near Indore in Madhya Pradesh, Mahakaleshwar in Ujjain in Madhya Pradesh and Kashi Vishwanath in Varanasi in Uttar Pradesh. Also, it will connect the industrial and education hub of Indore and Bhopal, the capital of Madhya Pradesh.

6. In weekly service, the train will run from Varanasi-Indore on every Sunday. It will depart from Varanasi at 3:15 PM and reach Indore at 9:40 AM. While returning the train will run from Indore- Varanasi every Monday. It will leave from Indore at 10:55 AM and reach Varanasi at 5:00 AM the next day. The stoppage stations will be Ujjain, Jhansi, Kanpur Sant Hirdaram Nagar, Bina and Allahabad, both to and fro. In the coaches of the train LED lights are placed.

7. If we talk about the facilities of the train Indian Railways Catering and Tourism Corporation (IRCTC) will provide several facilities including high-quality vegetarian food, in-board bedrolls, and housekeeping services and on-board security services. It will also provide exclusive tour packages for the passengers covering the religious, business and tourism sites of Uttar Pradesh and Madhya Pradesh. Onboard there will be two private guards in every coach and light devotional music. Religious sites covered by the train are Kashi, Omkareshwar, Mahakaleshwar, Bhopal, Sanchi, Ujjain, Bhimbetka, Ayodhya and Prayag.

8. There is a provision of insurance cover i.e. for every passenger travelling on the train has complimentary travel insurance of Rs 10 Lakhs. Passenger can make their bookings for the train through the IRCTC website and its mobile app Irctc Rail Connect. Passengers can also book their tickets through authorised agents and online travel partners of IRCTC.

Now you have come to know about the features and interesting facts about Kashi Mahakal Express and its commercial run will start from 20 February, 2020. It is the third corporate passenger train run by IRCTC.