Framed by Lord Wellesley, the Governor-General of India from 1798 to 1805, the Subsidiary alliance was a major process that led to the building of the British Empire in India. 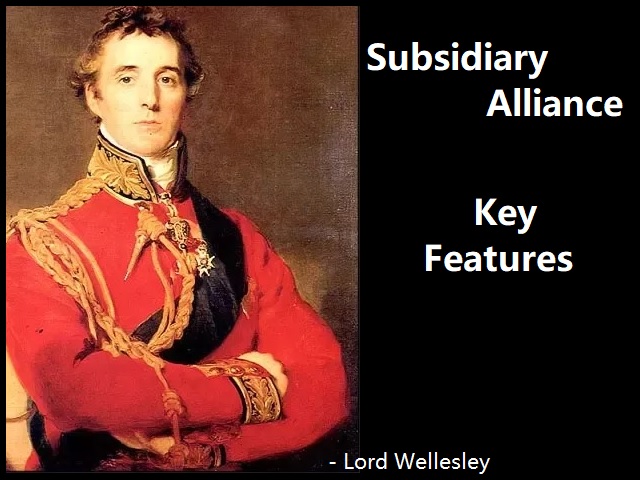 The British East India Company started an outright war of non-intervention policy and the assumption of the territories of previously subordinated rulers to achieve political aspiration i.e. bringing the Indian States within the orbit of British power. The Subsidiary Alliance System was “Non-Intervention Policy” used by Lord Wellesley who was the Governor-General (1798-1805) to establish the British Empire in India. According to this system, every ruler in India had to accept to pay a subsidy to the British for the maintenance of the British army. In return, the British would protect them from their enemies which gave the British enormous expansion.

The terms "Subsidiary Alliance" was introduced by French Governor DupleixIt and was firstly used by Lord Wellesley who effectively institutionalized the policy of “non-intervention” which made the Nawab and Nizams subsidiary allies by signing almost 100 such treaties.

Key points of the Subsidiary Alliance
1. The allies of the Indian state’s rulers were compelled to accept the permanent garrison of the British Army within their territories and to pay a subsidy for its maintenance.
2. The Indian ruler could not employ any European in their service without prior approval of the British.
3. They could not negotiate with any other Indian rulers without consulting the Governor-General.

4. A British Resident was also stationed in the Indian Court.

State comes under the periphery of the policy
1. ‘The Nizam of Hyderabad’ was the first victim of this policy. In AD 1798 it detached the Nizam from the French and also forbade having alliances with Maratha without British consent.
2. Second state was Mysore in AD 1799. Then Wellesley compelled the Nawab of Awadh to accept the Policy of Subsidiary Alliance in AD 1801.
3. In AD 1802, Peshwa Baji Rao II also subjugated his state under this policy. Many Maratha states like Bhosle and Scindia in AD 1803 also accepted the terms of the policy.
4. The last Maratha Confederation i.e. Holkars too accepted the terms of the subsidiary alliance.

The Policy of Subsidiary Alliance was in reality, a document of losing sovereignty which meant the state did not have the rights of self defence, of maintaining diplomatic relations, of employing foreign experts, and of settling its disputes with its neighbours.