Shivaji Maharaj build Maratha Empire and several battles were fought in his reign. In 1674, he founded an independent Maratha kingdom with Raigad as its capital. Let us have a look at the list of battles fought by Shivaji Maharaj. 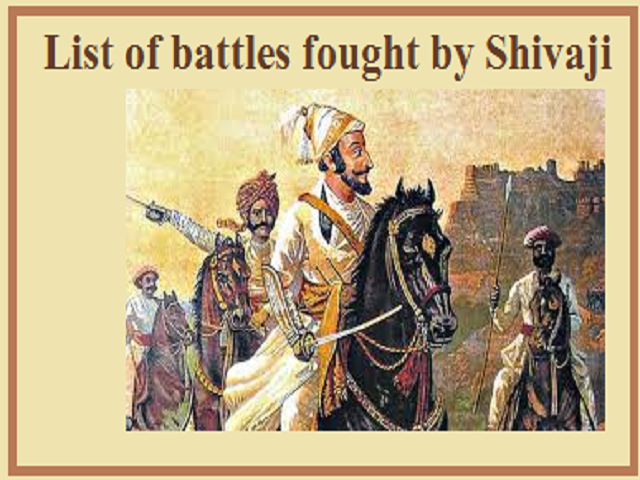 He was born on 19th February, 1630 at the Shivneri Fort to Shahaji Raje and Jijabai. He was a warrior and a Maratha king who had the utmost courage to stand against the Mughal rule. His original name was Shivaji Bhosle but due to his administration and leadership he earned the title of "Chhatrapati" or the "Chief of the Kshatriyas".

The beginning of the 17th-century witnessed the rise of new Warrior class Marathas when the Bhonsle family of the Poona district got military as well as a political advantage by Ahmednagar kingdom of being local. Therefore, they took privileges and recruited a large number of Maratha sardars and soldiers in their armies. Shivaji was an expert soldier and an efficient administrator. Here, we are giving the list of Battles fought by Chhatrapati Shivaji Maharaj for the general awareness.

Shivaji showed his mettle when at the young age of 18; he overran a number of hill forts near Poona-Raigarh, Kondana and Torna. He began his real career of conquest in 1656 when he conquered Javli from the Maratha chief, Chandra Rao more. The conquest of Javli made him the undisputed master of the Mavala area or the highlands and freed his path to the Satara area and to the coastal strip, the Konkan. In the above list of battles fought by Chhatrapati Shivaji Maharaj will enhance the general knowledge of the readers.