Traditional Dramas or theatres are performed during different social and religious occasions in India. It is also known as rural or village theatre. It reflects the common men's social and cultural attitudes and perceptions. In India tribal sports, habit, tradition, culture, vigour, joy, even disguise for mockery become parts of traditional theatre. In this article we are giving the list of Famous Traditional Dramas or Theatre of India, which is very useful for the competitive examinations like UPSC-prelims, SSC, State Services, NDA, CDS, and Railways etc. 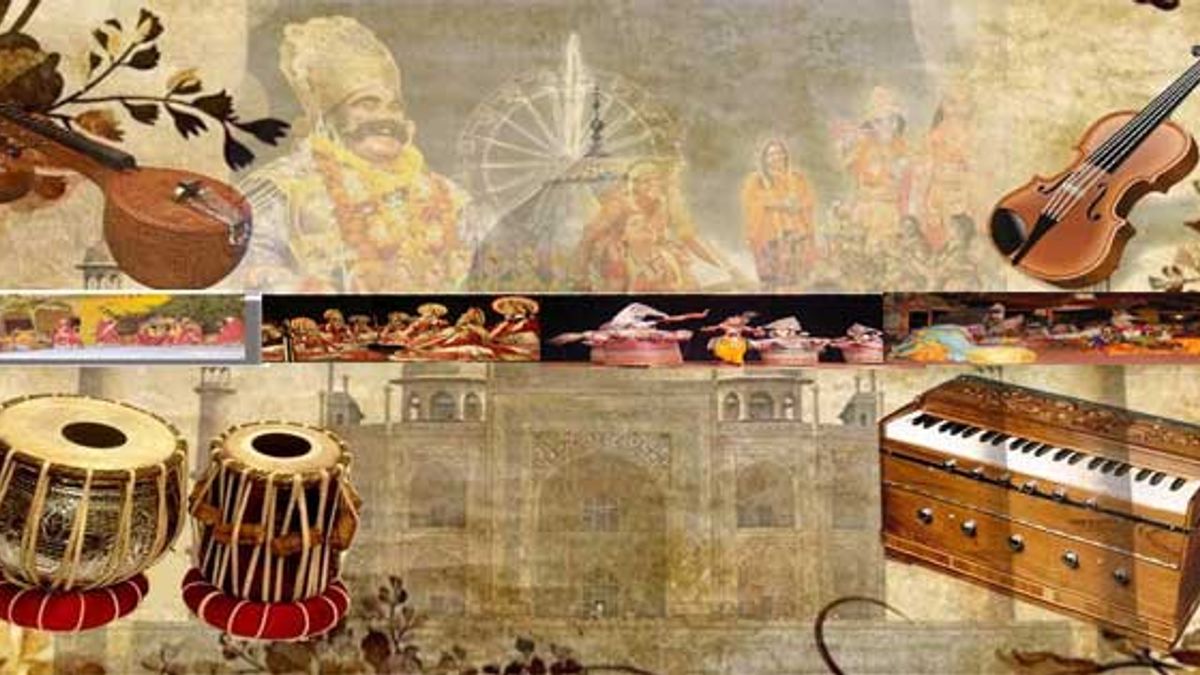 Traditional theatres are performed during different social and religious occasions in India. It is also known as rural or village theatre. It reflects the common men's social and cultural attitudes and perceptions. During medieval India traditional/folk theatre was very famous in India. In this form of theatre there are special styles of dance which reflects the living and lifestyle of common men. Their cultural aspects are reflected through these plays. In India tribal sports, habit, tradition, culture, vigour, joy, even disguise for mockery become parts of traditional theatre.

It is traditional folk theatre of eastern India. The origin of this musical drama or theatre intrinsically a musical theatre form, is traditionally credited to the rise of Sri Chaitanya's Bhakti movement, wherein Chaitanya himself played Rukmini in the performance of Rukmini Haran ("The abduction of the Charming Rukmini") from Krishna's life story, a first definite presentation of this theatrical spectacle. Music and drama are also added in Jatra of Odisha. Though started with traditional and rural style, today it has become commercial and suburban.

It was started by the Tulsidas during Mughal period in Kashi. It is similar to Yatra where religious music and dialogues are performed. The theme of this play is the story of Ramayana, played during Desersa. It is very popular among rich, poor, older or younger. Even it is famous in Java, Sumatra and Indonesia too.

It is part of the traditional story of Krishna described in Hindu scriptures such as the Bhagavata Purana and literature such as the Gita Govinda, where he dances with Radha and her sakhis. It is a combination of two words- rasa meaning "aesthetics" and lila meaning "act," "play" or "dance". Hence, it is a concept from Hinduism, which roughly translates to "play (lila) of aesthetics (rasa)," or more broadly as "Dance of Divine Love". It is believed that Nand Das wrote the initial plays based on the life of Krishna.

This drama or theatre is two types: Braj Ras of Mathura and Manipuri Ras of Manipur. Braj Raasleela is different from Manipuri Rasleela in proposing dance, dialogue, costumes and style.

It is very famous traditional theatre in the state of Punjab, Haryana and Odisha. It was performed in rural area of Rajasthan, Uttar Pradesh, Uttrakhand and Bengal. The softness of emotions, sharpness of dialogue and specific costumes are some features of this theatre. The two important styles of Swang are from Rohtak and Hathras. In the Rohtak style, the language is used is Haryanavi (Bangru) and in Hathras, it is Braj Bhasha.

It is a famous traditional theatre of Northern India. It is said that this style was developed from 'Bhagat' form of theatre which is approximately 400 years old, while the word 'Nautanki' come into existence only in 19th century.

It is the most developed and famous theatre of Konkan and Goa region. The performers personify the 10 incarnations of Lord Vishnu and performed during religious ceremonies.

It is the most interesting and popular folk drama of Himachal Pradesh, particularly in Shimla, Solan and Simour. It is an open air performance, comprising of an entertaining series of small playlets, staged during village fairs and festive occasions

It is Hindustani folk-dance drama or theatre of Rajasthan. They are performed exclusively by men, are characterized by the powerful body movements of the performers, and include mime and chanting. Percussion (rhythm section) and stringed instruments accompany the khyal. The professional dancers of the khyal are known as ‘Bhawni’. It is based on social, historical, religious and love. However it is on the verge of extinction.

It is a traditional folk drama or theatre form of Maharashtra. It has evolved from the folk forms such as Gondhal, Jagran and Kirtan. Unlike other theatre forms, in Tamasha the female actress is the chief exponent of dance movements in the play. She is known as Murki. Classical music, footwork at lightning speed and vivid gestures make it possible to portray all the emotions through dance.

It is a dance and poetic dance drama or theatre form of Kerala, India. It was introduced in the 18th century by Kunchan Nambiar, one of the Prachina Kavithrayam (three famous Malayalam language poets). It is performed with singing, stylised make-up and masked face. It is performed in open air of temple.

The most popular form of folk drama of Tamil Nadu literally means 'street play'. It is mostly performed at the time of annual temple festivals of Mariamman (Rain Goddess) to achieve rich harvest. It is a form of entertainment, a ritual, and a medium of social instruction.

It is a famous folk theatre of Andhra Pradesh. It was written by Siddhendra Yogi in the 16th century, to retain the sanctity of dance from the prostitute-dancers. It contains elaborate expressions and complex gesture adhered in by Kuchipudi dance.