Folk Paintings are pictorial expressions of village painters which are marked by the subjects chosen from the epics like Ramayana and Mahabharata, Bhagvata Purana as well as daily village life, birds and animals and natural objects like sun, moon, plants and trees. In this article, we are giving the list of Folk Paintings of India, which is very useful for the competitive examinations like UPSC-prelims, SSC, State Services, NDA, CDS, and Railways etc. 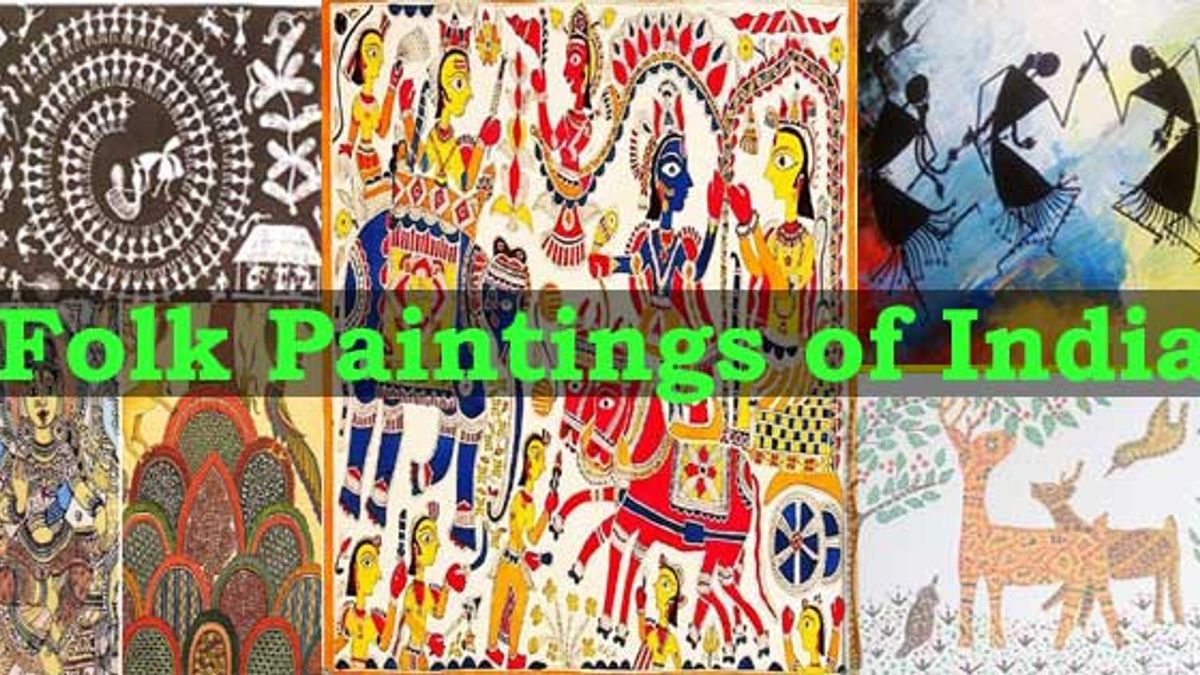 Folk Paintings are basically concerned with the villages of India. They are pictorial expressions of village painters which are marked by the subjects chosen from the epics like Ramayana and Mahabharata, Bhagvata Purana as well as daily village life, birds and animals and natural objects like sun, moon, plants and trees.

There are eight folk paintings are recognised in India which are discussed below:

It is the folk painting of Bihar. Jitwarpur village of Madhubani district is the main centre. In this painting, the Kohbar (traditional room of the married couple) in the folklore of Bihar region are drawn as painting. In this style of folk painting, the scenes of Ramayana and the images Hindu God-Goddesses are depicted on the canvas. Mahasundari Devi is the famous artist of the Madhubani painting.

It is folk painting of Odisha. Paintings are based on the Subhadra, Balrama, Lord Jagannath, Dashavatara and the scenes related to the life Lord Krishna.  They are manifested with rich outline, red, yellow, ochre, white and black colours.

It is the folk painting of Rathvas and Bhilalas tribes of Gujarati. It is more than ritual rather than art form.

The literal meaning of Kalamkari is ‘painting made by the use of pen’. It is very popular in Machilipatnam of Krishna district, Andhra Pradesh. It is a type of hand-paints or block-printed cotton textile, produced in parts of India.

It is folk painting of West Bengal. It originated in the vicinity of kalighat Kali Temple (Kolkata). In this art form, various Hindu Gods and other mythological characters are drawn.

It is an ancient and traditional folk art of India. It is drawn mainly in festivals and ceremonies. It is known by different names such as Chawk Purna in Uttar Pradesh; Aipan in Uttarakhand; Mandana in Rajasthan; Muggulu in Andhra Pradesh; Aripana in Bihar; Rangoli in Maharashtra; Alpana in West Bengal; Athiya in Gujarat; Rangwalli in Karnataka; Kollam in Tamil Nadu; Arooph in Himachal Pradesh; and Kalma Jattu in Kerala.

It is famous in Maharashtra. It is made by the local tribes of the Worli and depicts the scenes from the social and cultural life of these groups. In this art form, chewed bamboo stick is used as brush and mixture of rice paste and water gum is used as colour.

It is Tibetan folk painting. In this art form, images of Buddha paintings are made on the cotton or silk cloth. It is categorised into three types- Tibetan Buddhist wall painting; glimpse of Buddhist lifestyle; and rituals and practices of daily life.

School of Miniature Painting in India