The density of air and the atmospheric pressure is high at the lower layers of the atmosphere. Atmospheric pressure decreases with increasing height. But there are also several regions where the air pressure is remarkably consistent across the globe. In this article, we are giving the list of Idealized Global Air Pressure Belt across the Globe, which is very useful for the competitive examinations like UPSC-prelims, SSC, State Services, NDA, CDS, and Railways etc. 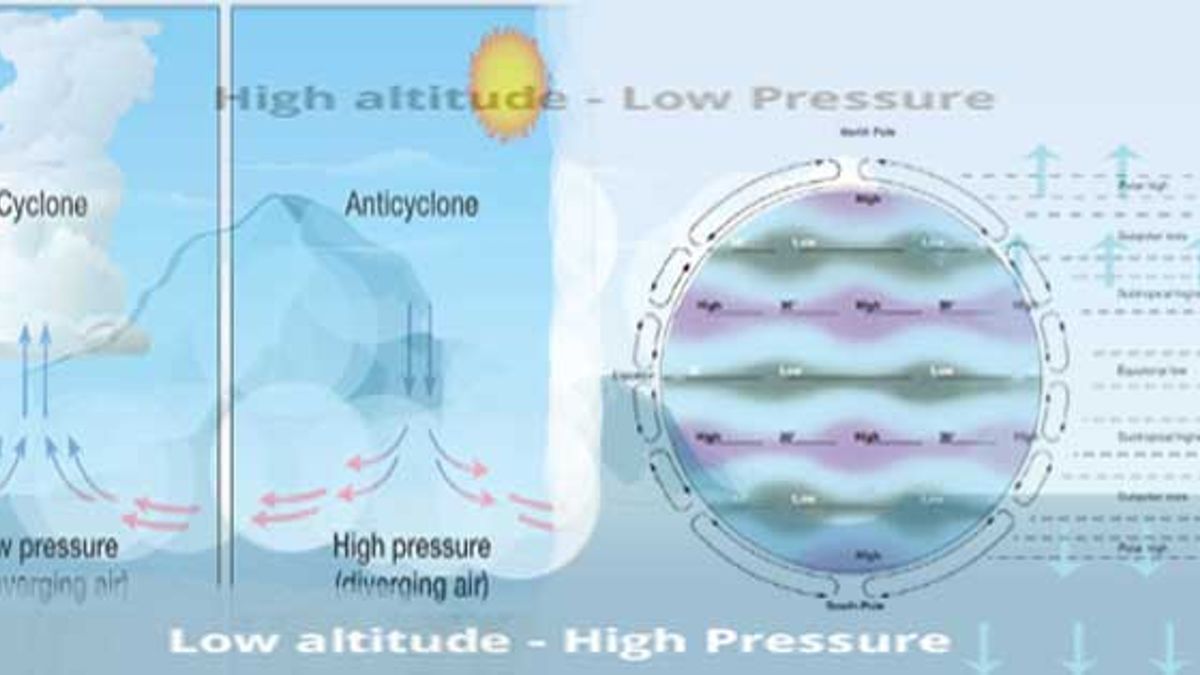 The density of air and the atmospheric pressure is high at the lower layers of the atmosphere. Atmospheric pressure decreases with increasing height. Though there is no direct relation between the increasing height and the rate of decrease in atmospheric pressures. This is because air at the surface is compressed by the weight of all the air above it. It varies with location and time, because the amount (and weight) of air above the Earth varies with location and time. But there are also several regions where the air pressure is remarkably consistent across the globe.

List of Idealized Global Air Pressure Belt across the globe The air masses form four idealized Global Air Pressure Belt across the globe which are discussed below:

It is located in the vicinity of the geographical equator between 50 North and 50 South latitude. It is the region of convergence of trade winds blowing equatorward from the sub-tropical belts of high pressure in the northern and southern hemispheres. Within this belt the winds are light and variable with frequent calms. Because the converging air is wet and full of excess energy, it expands and cools as it rises, creating the clouds and heavy rainfall that are prominent throughout the area. It also forms the Inter-Tropical Convergence Zone (ITCZ) and trade winds.

In this region the temperature is high throughout the year, so the air pressure is always low. It is thermally produced region. Therefore, the pressure is more uniform than that in other parts of the world.

It is also called subtropical ridge or subtropical high or horse latitudes. It is situated around the latitudes of 30°N in the Northern Hemisphere and 30°S in the Southern Hemisphere. This belt owes its origin to the rotation of the Earth and sinking and settling down of wind. It is, thus mainly dynamically induced. The air rising at the equatorial belt starts blowing poleward. But these winds get deflected towards east due to rotation of the Earth. This phenomenon was first discovered by the French scientist Coriolis; hence this force exerted by the rotation of the Earth is called Coriolis force.

The quantity of force keeps increasing with increasing distances from the equatorial belts. This results in piling up of air at a height over these latitudes. The air starts descending due to cooling and resultant increase in its density. In this way high-pressure zones are created between the Tropic of cancer and 350 north latitude; and tropic of Capricorn and 350 south latitude. This is not continuous belt, but it is broken into a number of high pressure centres or cells. The dominant winds in the subtropical high are called westerlies.

It is located between 60° and 70° latitudes in the Southern and Northern hemisphere. This low pressure belt is dynamically induced and is the regions of frontogenesis or temperature cyclones. It creates all the major deserts along the west coast of the continents.

The precipitation in the Pacific Northwest and much of Europe in the northern hemisphere is the resultant of the meeting forms the polar front. In the southern hemisphere, severe storms develop along these fronts and cause high winds and snowfall in Antarctica.

It is located between 80 degree North and 90 degree South latitude in the Northern Hemisphere and Southern Hemisphere. High pressure persists at the poles throughout the year because of the prevalence of very low temperature all the year. The air subsides in this zone due to intense cooling and results into high density.

The pressure difference is the major cause of the genesis of the wind system. The horizontal movement of air in a particular direction is called wind. The air moves from high pressure to low pressure. The surface pattern of pressure belts, as discussed above, seldom remain stationary in its latitudinal zones. There are daily, seasonal and annual changes in air pressure because northward and southward movement of the sun, contrasting nature of the heating and cooling of land and water etc.