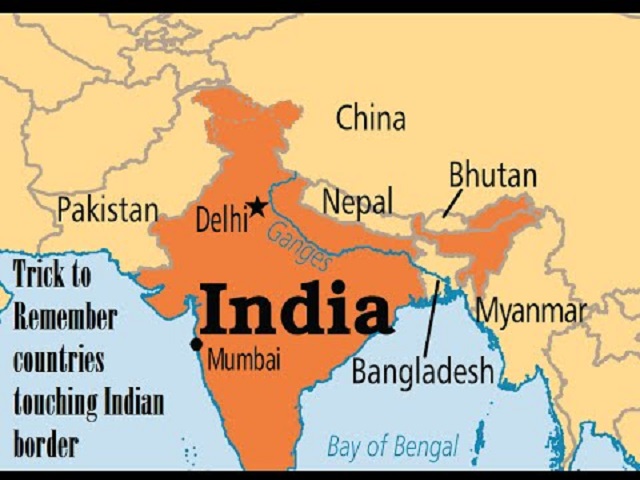 India is located latitudinally in the Northern Hemisphere and longitudinally in the Eastern Hemisphere. In this article, we are providing you with the list of India’s neighbouring countries and the states of India bordering them. This will helps the students to enhance their general knowledge in dealing with the questions related to Geography of India in different academic as well as competitive examinations.

India has a land frontier of 15,200 km. The total length of the coastline of the mainland, Lakshadweep Islands and Andaman and the Nicobar Islands is 7,516.6 km.  India shares its border with seven countries- Afghanistan and Pakistan to the North-West, China, Bhutan and Nepal to the North, Myanmar to the far East and Bangladesh to the East. Sri Lanka (from the South-East) and Maldives (from the South-West) are two countries with water borders. Neighbouring countries of India at a glance

India has the third-largest international border in the world after China and Russia, and also the most sensitive border of the World that varies from extreme climatic conditions to infiltration.

The above-mentioned list of India's neighbouring countries is asked in many academic as well as competitive examinations.