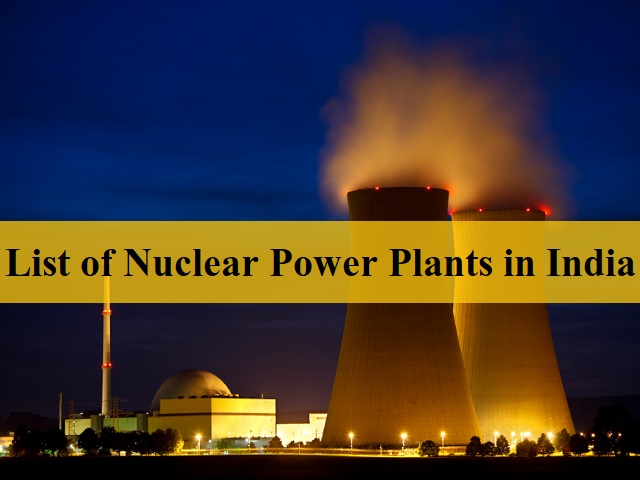 Nuclear Power is the fifth-largest source of generating electricity in India after coal, gas, wind power and hydroelectricity. At present, India has 22 operational nuclear reactors with an installed capacity of 6,780 MW in 7 nuclear power plants. The nuclear energy programme in India was launched around the time of independence under the leadership of Homi J. Bhabha.

Asia's first nuclear reactor is the Apsara Research Reactor situated in Mumbai. The domestic uranium reserve in India is small and the country is dependent on uranium imports from other countries to provide fuel to its nuclear power industry. Since the 1990s, Russia has been a major supplier of nuclear fuel to India.

Post atomic bombing of Hiroshima in August 1945, R.S. Krishnan, a nuclear physicist noted, "If the tremendous energy released from atomic explosions is made available to drive machinery, etc., it will bring about an industrial revolution of a far-reaching character."

So, this was the list of all the nuclear power plants in India. The list will be helpful for the students preparing for academic and various competitive and government examinations.

Which Nuclear Power Plant in India has the highest capacity?

Kudankulam Nuclear Power Plant in Tamil Nadu is the highest capacity nuclear plant in India with an installed capacity of 2000 MW.

Which is Asia's first Nuclear Reactor?

How many operational Nuclear Power Plants are there in India?

At present, India has 22 operating nuclear reactors in 7 nuclear power plants with an installed capacity of 6,780 MW.

Which is the first Nuclear Power Plant in India?

Tarapur Atomic Power Plant-1 (TAPS-1) is the first Nuclear power plant in India. It is operational since October 1969 and is situated in Boisar, Maharastra.
Comment ()