While travelling by the train we often see different signs symbols besides the railway track. But many of us are not aware about these signs symbols. These signs symbols can only be understood by the person who is working in the Indian railways. But in this article we are publishing the detail of such signs symbols to make you aware. 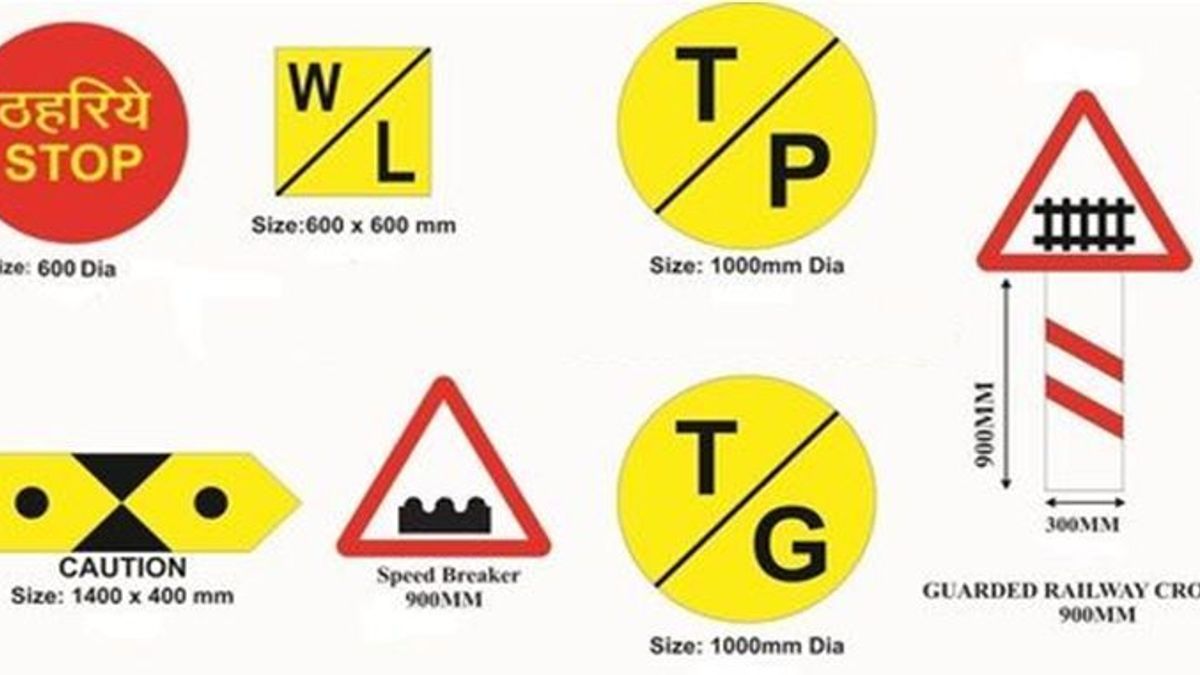 Some important signs & symbols and their meaning is as follows;
1. Caution Indicator Board
Arrow-shaped boards points to the left or right. This sign indicates special restrictions on the track due to temporary or permanent engineering work. The direction of the arrow indicates that on which track the restriction applies to. These boards are usually painted in black and yellow colour. 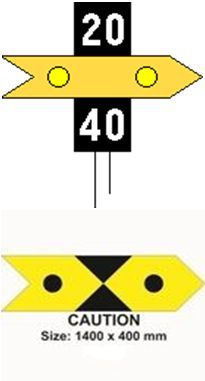 In the olden time two lamps used to brighten the yellow strip but today such colours are used in painting these which provide sufficient visibility at night also.
The caution indicator is usually placed 700m before a Speed Indicator board or and 800m before the actual point of workplace. After seeing the "Caution indicator board" the drivers have to slow down the speed of the train.

2. Speed Termination Indicator Board
Often while traveling on the train, we see the circular board written T / G and T / P on the side of the tracks. Generally Speed Termination Indicator Boards are located on the left side of the tracks. T / G's full name is termination of speed restriction for Goods trains, whereas the full name of T / P is termination of speed restriction for passenger trains.

Other speed termination Board are;
Other termination indicators seen include T/PG (for both passenger and goods trains, T/P24 (for 24-coach or longer passenger trains), and T/L (for local, i.e., suburban trains, usually EMU or DMU trains).

3. Signal Sighting Board
This signal sighting board is a rectangular reflective board with a circle and two horizontal lines, yellow on black.
The meaning of this signal for the driver is that, this sign warns the driver of a signal ahead and the driver needs to pay the attention of this signal. The next signal will instruct him that whether he need to slow or stop the train.

4. Whistle Indicator Board
Often, while traveling in the train, we see Yellow Square colored on the side of the tracks. The boards have W, W / L, W / B or C / F words. These boards are just signal to the drivers for blowing the whistle.

The 'W' is a general whistle indicator while the 'W/L' stands for Whistle for Level Crossing because there is unmanned crossing ahead. The letter is also seen in Hindi with the characters 'see/pha' i.e. Siti Bajao - Phatak').

Normally W / L or C / F board is placed before the 250 meters of unmanned gate. Similarly, the W / B board informs the driver of the train that the bridge is ahead so he need to blown the horn while crossing the bridge.

5. X Mark on the last Coach of the Train
The last coach of the train is marked with a yellow X paint mark. This mark is the signal for the train supervisor to know that entire train has departed and no coach is left behind.

Apart from this, the last coach of the train also has electric lamp. In the older days this lamp was burnt with oil but now it is burnt with electricity.

If a train passes through a station or a signal cabin, which does not have a board of “LV” then it is believed that the entire train has not reached and some coaches are left behind. In such situation emergency action is initiated by the concerned authorities.

'C/T' written by ink black on a round yellow board. This sign indicates the drivers that the tunnel is ahead of the train. The sign is placed just outside the entrance to the tunnel.

So if you read this article carefully and your train passes nearby any such symbols, i am sure that you will come to know about the meaning of those symbols immediately.

What is bio toilet and how does it work?