What is Mongolian Kanjur?

Reprinting 108 volumes of Mongolian Kanjur project has been taken up by the Ministry of Culture under the National Mission for Manuscripts (NMM). It is expected that all these volumes will be published by March 2022. Let us read in detail about Mongolian Kanjur. 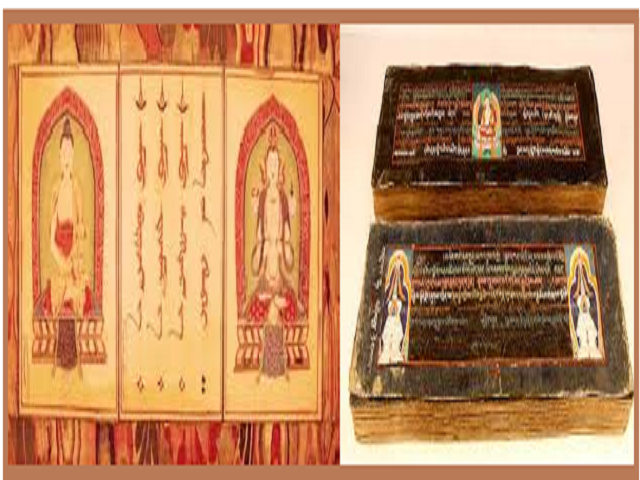 The first set of five volumes of Mongolian Kanjur published under the National Mission for Manuscripts (NMM) was presented to the President of India Shri Ram Nath Kovind on 4 July, 2020 on the occasion of Guru Purnima also known as Dharma Chakra Day.

What is Mongolian Kanjur?

It is the Buddhist canonical text which is considered to be the most important religious text in Mongolia. 'Kanjur' in the Mongolian language means 'Concise Orders' that is the words of Lord Buddha in particular. The language of the Kanjur is Classical Mongolian and there are 108 volumes.

It is held in high esteem by the Mongolian Buddhists and that they worship the Kanjur at temples and recite the lines of Kanjur in their daily life or a part of their lifestyle as a sacred ritual. Almost in every Monastery in Mongolia, the Kanjur are kept. Let us tell you that the Mongolian Kanjur has been translated from Tibetan (Kangyur). In fact, the Mongolian Kanjur is a source of providing a cultural identity to Mongolia.

The historical interaction between India and Mongolia goes back centuries. By Indian culture, Buddhism was carried to Mongolia and religious ambassadors during the early part of the 1st millennium CE. Traditionally, Tibetan Buddhism was the predominant religion. That is today, Buddhists form the single largest religious denomination in Mongolia.

During 1946-1990, it was suppressed under the communist regime with only one showcase monastery allowed to remain. Several manuscripts were consigned to flames and monasteries were bereft of their sacred scriptures. As liberalisation began, since 1990, Buddhism has encountered a resurgence. As per the national census of 2010, 53% of the Mongolians identify as Buddhists.

About the Indian connection

Professor Raghu Vira during 1956-58 obtained a microfilm copy of the rare Kanjur manuscripts and brought them to India. In the 1970s, Mongolian Kanjur in 108 volumes was published by Professor Lokesh Chandra, former Rajya Sabha MP. Now the present edition is being published by the NMM for Manuscripts. In this, every volume will have a list of contents indicating the original title of the sutra in Mongolian.

In 1955, India established formal diplomatic relations with Mongolia. Since then both the countries overwhelming relationship has now reached a new height. Therefore, the publication of the Mongolian Kanjur by the Government of India for the Government of Mongolian will act as a symbol of cultural symphony between India and Mongolia and during the coming years will contribute to the furtherance of bilateral relations.

Do you know about Manuscript?

It is a handwritten composition mainly written on paper, bark, cloth, palm leaf, or the other material dating back a minimum of seventy-five years. It is important as it has significant scientific, historical, or aesthetic value. Let us tell you that lithographs and printed volumes are not manuscripts.

What is the National Mission for Manuscripts?

It was launched in February 2003 by the Government of India, under the Ministry of Tourism and Culture with the mandate of documenting, conserving and disseminating the knowledge preserved in the manuscripts. One of the main aims of the mission is to publish rare and unpublished manuscripts so that the knowledge enshrined in them is spread to researchers, scholars, and the general public at large. Therefore, under this scheme, the reprinting of 108 volumes of Mongolian Kanjur has been taken up by the Mission. And it is expected that all the volumes will be published by March 2022. This work is being carried out under the supervision of eminent scholar Prof. Lokesh Chandra.

At last let us tell you that the Prime Minister of India, Narendra Modi in his address on the occasion of Dhamma Chakra expressed "On this day of Guru Poornima, we pay homage to the Lord Buddha. On this occasion, the copies of the Mongolian Kanjur are being presented to the Government of Mongolia. The Mongolian Kanjur is widely respected in Mongolia.”