National Youth Parliament Festival (NYPF) 2021: All you need to know

On 31st December, Prime Minister Narendra Modi in his Mann Ki Baat Address gave the idea of the National Youth Parliament Festival (NYPF). Let us read in detail about the NYPF, its objectives, guidelines for participation, etc. 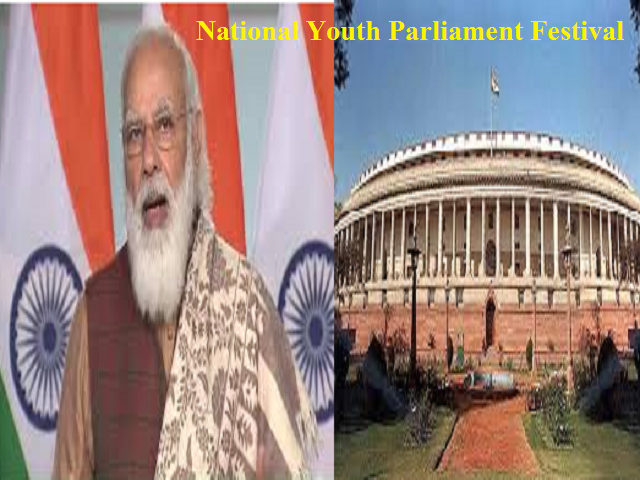 - To listen to the voice of youth between 18 and less than 25 years of age, who are allowed to vote but cannot stand as a candidate for election, through deliberations in Youth Parliaments at the district level and above.

- To develop and enhance decision-making abilities.

- To uplift the youth to engage with public issues, understand the view of common man's point, form their opinions, and express it in an articulate manner.

- To develop in them a respect and tolerance for the views of others.

- To make their views available to the policymakers and implementers to take it forward.

- To develop an understanding in them regarding rules that are essential for conducting any discussion systematically and effectively.

- On Vision of New India in 2022, to obtain and document their opinions.

- To participate youth in the Youth Parliament festival must be above 18 and less than 25 years of age as of 30th November, 2020. It will be the duty of the participant to furnish the correct information in this regard. If they provide false information, then it will lead to disqualification from participation in the Parliament at whatever stage.

- To participate in the Youth Parliament festival it is not necessary that the individual will be a student of an educational institution.

State Youth Parliament (SYP): It was conducted through the virtual mode from 01 to 05 January 2021. In this, 1st and 2nd winners from participating districts numbering 1,345 took part.

During District and State Youth Parliaments, the participants maximum for 4 minutes deliberated on the given topics, and winners were judged by a five-member Jury.

On 12th January, 2021, Prime Minister Narendra Modi will address the Valedictory Function of the National Youth Parliament Festival 2021. Also, the first three winners will get an opportunity to speak before the Prime Minister. On the occasion, he will also interact with the youth.

On 31st December in 2017, Prime Minister Narendra Modi shared the idea of youth becoming the voice of India in his Mann Ki Baat address.

He said “I got an idea whether we could organize a mock parliament in every district of India? Where the youth between 18 and 25 could sit together and brainstorm about new India, find ways and chalk our plans. How could we realize our resolve before 2022? How could we build an India of the dreams of our freedom fighters?”

He also said that youth should be given a chance to put their views on several issues concerning the country.

He reiterated his desire to organise the District Youth Parliaments in his address at the time of the inaugural of the 22nd National Youth Festival on 12 January, 2018.

From 12 January to 27 February 2019, the first National Youth Parliament Festival was organised at District, State & National level with the theme “Be the Voice of New India and Find solutions and Contribute to Policy”.

A total of 88,000 youth participated in the program. On 26th February 2019 at New Delhi, 56 State Awardees and 728 finalists from 28 States participated in National Youth Parliament.

Prime Minister, Narendra Modi awarded the Top 3 winners of the first National Youth Parliament Festival on 27 February, 2019. They also got an opportunity to share their thoughts in presence of the Prime Minister Narendra Modi.

Therefore, we can say that to continue with the same spirit and objective on 23rd December, 2020, the 2nd National Youth Parliament Festival 2021 was launched through virtual mode. It was attended by more than 23 Lac youth and stakeholders across the country at district, state, and national levels.

It is celebrated every year from 12 to 16 January. Also, National Youth Day is observed on 12 January to commemorate the birth anniversary of Swami Vivekananda. This year, NYPF is also being organised along with the National Youth Festival.

The aim of celebrating the National Youth Festival is to bring the youth of the country together to showcases their talents, to provide them an arena, by developing a mini-India where youth can share their views, interact in formal and informal settings and exchange their social and cultural uniqueness.

The festival also promotes national integration, the spirit of communal harmony, brotherhood, courage, and adventure. The main aim is to generate the spirit, essence, and concept of Ek Bharat Shreshtha Bharat.

The 24th National Youth Festival is being held in virtual mode due to COVID-19 with the theme "YUVAAH – Utsah Naye Bharat Ka'.

Important Days and Dates in January 2021