Pi day is observed on 14 March annually and also on this date Albert Einstein was born. It was founded in 1988 by a physicist Larry Shaw. In mid 18th century pi has also been represented by the Greek letter π. Let us study more about pi, its history, invention and some interesting facts about it. 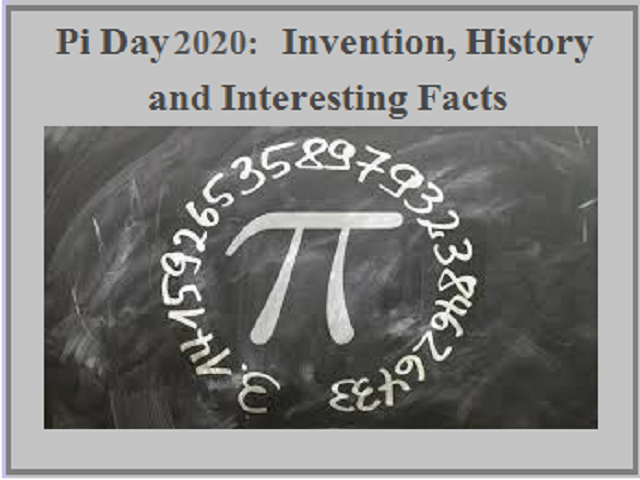 Pi Day is celebrated every year on 14 March. This day not only commemorates a very special number but also celebrates the birthday of the great scientist and mathematician Albert Einstein. Let us study more about symbol Pi and Pi day through this article.

Do you know that Pi is an irrational number i.e. a real number that cannot be expressed by a simple fraction? According to mathematician pi is also known as an infinite decimal which means that after the decimal point, the digits go on forever and ever.

On 14 March, 1988, the first official large-scale celebrations occurred at the San Francisco Exploratorium. This event was organised by Larry Shaw a physicist. Do you know that at this celebration several participants marched around a circle and consumed fruit pies? Years after years it gained popularity and finally, the U.S House of Representatives passed HRES 224 on 12 March, 2009, recognising 14 March as Pi Day.

To approximate circles, the mathematician Archimedes used polygons with many sides and determined that Pi was approximately 22/7. In 1706, the Greek symbol π was first used by William Jones. Do you know that a 'p' was chosen for 'perimeter' of circles and so π became popular and was adopted by the Swiss mathematician Leonard Euler in 1737?

On this day various celebrations occur worldwide with several activities like people recite Pi and see who can get the furthest. In Museums and Science centers educational programs, music, pi memorisation challenges, and math fans celebrate this day by simply enjoying a slice of pie. Numerical fun is also sometimes accompanied by delicious food items like pizza pie, fruit pie, etc. As we know that pi is used in formulas in math and physics.

Some interesting facts about Pi

- Pi is an irrational number that is it is not possible to calculate Pi by dividing an integer by any other number.

- Pi is a never-ending and never-repeating number.

- As the value of Pi is never-ending so we can't find the true circumference or area of a circle.

- Pi is the ratio of a circle's circumference to its diameter.

- In the 19th century, William Shanks calculated the first 707 digits of Pi by hand but unfortunately, he made a mistake after 527th place.

- A Japanese scientist, breaking all the previous records, with the help of Hitachi SR 8000 which is a powerful computer found 1.24 trillion digits of Pi.

- Pi is mentioned in the Bible.

- In ancient times, Archimedes is the first person who studied about Pi.

- There are no zeros in the first 31 digits of Pi.

- In 1706, William Jones introduced the symbol of Pi and was popularised by Leonhard Euler in 1737.

So, now you may have come to know about the mathematics constant symbol Pi.