Let us tell you that Rabindranath Tagore was a multi-talented personality with a great desire to learn new things. His contributions to the literature, music and his several works are unforgettable. People not only in West Bengal but also in whole India remember him and his contributions on his birth anniversary. Even in 1913, he was awarded the most prestigious Nobel Prize for his great contribution to the Indian literature. Do you know that he was the first person from Asia to receive this award? We can't forget that he is the person who had composed the National Anthem of India.

He was born on 7 May, 1861 to Debendranath Tagore and Sarada Devi in the Jorasanko mansion which is the ancestral home of the Tagore family in Kolkata (Calcutta). Among his siblings, he was the youngest. He lost his mother when he was very young, his father was a traveller and so, he was mostly raised by his servants and maids. At a very young age, he was the part of the Bengal renaissance and his family also took active participation in it. At the age of 8, he started writing poems and by the age of sixteen, he also started composing artworks and started publishing his poems under the pseudonym Bhanusimha. In 1877 he wrote short story 'Bhikharini' and in 1882 the collection of poems 'Sandhya Sangit'.

He was influenced by the classical poetry of Kalidasa and started writing his own classical poems. His sister Swarnakumari was a well-known novelist. In 1873, he toured with his father for several months and gained knowledge on several subjects. He learned Sikhism when he stayed at Amritsar and pen down around six poems and many articles on the religion.

Rabindranath Tagore: Education
His traditional education began in Brighton, East Sussex, England, at a public school. In 1878, he went to England to become a barrister to fulfil his father's wish. He was not much interested in school learning and later also he joined University College in London to learn law but he dropped this and learned various works of Shakespeare on his own. He also learned the essence of English, Irish and Scottish literature and music; he returned to India and married Mrinalini Devi. 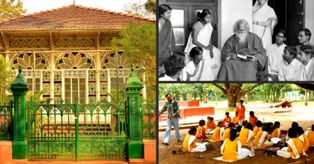 Source: www.thebetterindia.com
His father bought a huge land for meditation and named it as Shantiniketan. Debendranath Tagore founded an 'Ashram' in 1863. In 1901, Rabindranath Tagore established an open-air school. It was a prayer hall with marble flooring and was named as 'The Mandir'. It was also named 'Patha Bhavana' and started with only five students. Classes here were held under trees and followed the traditional Guru-Shishya method of teaching. This trend of teaching revival the ancient method of teaching which proved beneficial when compared with the modernised method. Unfortunately, his wife and two children died and he left alone. At that time he was very disturbed. At the meantime, his works started growing and became more popular amongst the Bengali as well as foreign readers. In 1913, he gained recognition and was awarded the prestigious Nobel Prize in Literature and became Asia's first Nobel Laureate. Now, Shantiniketan is a famous University town in West Bengal.

Let us tell you that Rabindranath Tagore envisioned a centre of learning which would have the best of both the east and the west. He established the Visva Bharati University in West Bengal. It consists of two campuses one at Shantiniketan and the other at Sriniketan. Sriniketan focuses on agriculture, adult education, village, cottage industries and handicrafts.

Japajog: Published in 1929, His novel is a compelling take on marital rape.

Nastanirh: Published in 1901. This novel is about relationships and love, both requited and unrequited.

Ghare Baire: Published in 1916. It is a story about a married woman constricted in her household trying to find her own identity.

Gora: In the 1880s, it is an expansive, exhaustive and extremely relevant novel which deals with several themes like religion, gender, feminism and also tradition against modernity.

Chokher Bali: In 1903, a novel which consists of various facets of relationships.

No doubt he has changed the dimensions of Bengali literature as it was earlier viewed. Many countries have even erected their statues to pay tribute to the legendary writer. Around five museums are dedicated to Tagore out of which three are situated in India and remaining two in Bangladesh.

He spent his last years in severe pain and even in 1937, he went into a comatose condition. After a lot of suffering, he died on 7 August, 1941 in the Jorasanko mansion where he was brought up.