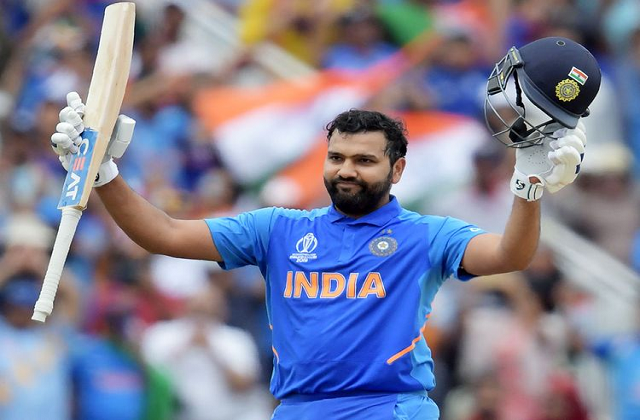 Rohit Sharma has played 224 ODIs for India. He has scored 9115 runs in the in 217 innings while remaining not out in 32 innings which is an achievement in itself because an opening batsman usually gets out due to long inning. The although the average of the Rohit is not as good as MS Dhoni and Virat Kohli carries but he is the only batsman in the cricket history who has scored 3 double centuries in the one-day international matches.

Records of Rohit Sharma in the ODIs are;

2. He is the third-highest century Scorer (29) Indian in the ODIs after the Sachin and Virat Kohli. Sachin and Kohli have scored 49 and 43 centuries respectively in the ODIs.

3. He is the only batsmen in the 12th edition of the Cricket World Cup who has scored 5 centuries.

4. Rohit has a unique record of reaching a century with a six in all three formats.

5. Rohit has the record of scoring the highest number of fours (33) in an ODI inning.

6. Rohit Sharma has broken the record of most runs from fours and sixes in an ODI inning by scoring 186 runs through boundaries. Earlier this record was held by Shane Watson.

8. Rohit Sharma is the only batsman who scored 8 innings of 150+ in ODIs; breaking the records of David Warner and Sachin Tendulkar.

9. He is the fastest Indian opener and the second-fastest opener in the world to touch 5000 ODI runs. Rohit took 102 innings to do so while Hashim Amla achieved this feat in just 100 innings.

10. He is the fastest Indian opener (83 innings) and the second-fastest opener (behind Hashim Amla) in the world to score 4000 ODI runs.

Test Match Debut: versus West Indies at Kolkata on Nov 6-8, 2013.
As the playing habit, Rohit is not considered a test match player because he is a new master blaster after Sachin Tendulkar.

Rohit has played just 32 test matches and he has scored 2141 runs at an average of 46.54 with the help of one double century, 6 centuries and 10 half-centuries.

Worth to mention that Virat Kohli could not score a century in the T-20I format so far.

Records of Rohit Sharma in the T-20I are;

2. Sharma is the second Indian after Suresh Raina to have scored at least a century in each of the three forms of International Cricket.

3. Rohit Sharma is the only Indian to score a T20I century as a captain.

5. He became the first and the only batsman in the world to score four T20I centuries.

Rohit Sharma has been nominated for the Rajiv Gandhi Khel Ratna Award 2020 for his excellence in the performance.

So there were some interesting international records of the Rohit Sharma. I hope that in the coming years Rohit will make more records in all the formats of international cricket.