Explained: Why experts are flagging the role of industrial oxygen behind the COVID-induced Black Fungus?

While the primary causes of Black Fungus or Mucormycosis are overuse of steroids, uncontrolled sugar levels, low immunity and comorbidities, however, experts are now suggesting possible links between industrial oxygen and Mucormycosis. 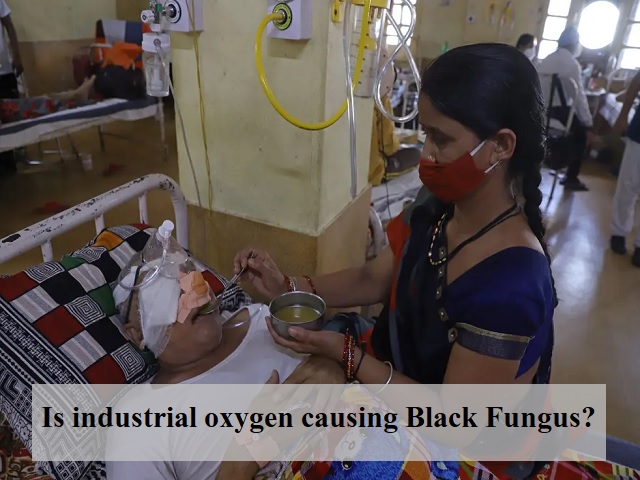 Role of industrial oxygen behind the COVID-induced Black Fungus

Of late, COVID-induced Black Fungus or Mucormycosis cases are emerging at a rapid rate and has since then startled the medical fraternity in the country. While the primary causes of Black Fungus are overuse of steroids, uncontrolled sugar levels, low immunity and comorbidities, however, experts are now suggesting possible links between unhygienic industrial oxygen cylinders and Mucormycosis.

Before jumping to the possible links between industrial oxygen and Black Fungus, we must first understand the difference between Medical Oxygen and Industrial Oxygen.

1- Medical oxygen is highly purified as compared to industrial oxygen at 99.67%.

2- Medical oxygen is prepared through repeated steps of compression, filtration and purification as compared to industrial oxygen which is roughly treated.

3- The cylinder in which medical oxygen is stored, transported and used is rigorously cleaned and disinfected regularly while this is not the case with industrial oxygen cylinders.

It is to be noted that medical oxygen requires humidification before being administered to patients. In case, if oxygen is given without humidification, it will dry the mucous membrane and damage the inner lining of the lungs. It is also passed through a container filled with sterile water. As per the protocol, the sterilised water must be changed frequently.

The new edition of the Black Fungus stems from the dire situation of people who were desperately trying to source oxygen to save their loved ones. To plug the shortage of medical oxygen cylinders, people started using industrial cylinders. Although medical oxygen is purer than industrial oxygen, the acute shortage of oxygen urged the medical fraternity to resort to the latter to meet the daily requirements.

As per experts, industrial cylinders should not be used for medical purposes unless upgraded. This involves proper cleaning, replacement of valves and fixation of leakages. However, amid the rising oxygen demand, the protocols were often ignored when putting industrial oxygen to medical use.

It is to be noted that the industrial cylinders do not meet the hygiene standards as they contain dust, particles, moisture and have water seepage issues. According to media reports, some industrial cylinders were upgraded to medical-grade while others were in use without any upgradation due to a surge in demand.

As industrial oxygen is prone to leaks, it can compromise the hygiene of the cylinder. Additionally, non-sterile water used in humidifiers, unsterilised equipment can also be linked to the spread of the Black Fungus.

Types of fungal infections: What are the Black, White and Yellow Fungus infections?

Steroids, a life-saving treatment for critically ill COVID-19 patients, is effective in fighting the effects of COVID-19 and not the virus directly. Doctors believe that Black Fungus or Mucormycosis may have triggered by the use of steroids.

As per doctors, Steroids, if given early, can frail the immunity of the body, facilitate further replication of viruses, push up blood sugar levels in both diabetic and non-diabetic COVID-19 patients, escalate the severity of novel coronavirus along with ill-effects of Black Fungus.

What is Black Fungus?

Black Fungus is a rare fungal infection and is caused by exposure to mucor mould that is commonly found in soil, plants or any decaying organic matter. If its progression is unchecked initially, it may prove to be fatal. The infection is diagnosed by ENT examination and MRI. COVID-induced Mucormycosis mainly affects the sinuses, lungs or the brain of people who have inhaled fungal spores from the air.

The symptoms, however, mainly depends upon which part of the body is affected. For instance, if eyes are affected, it leads to blurred or double vision with pain. If lungs are affected, it may worsen cough, chest pain, and so on.

Individuals involved in gardening activities often come in contact with infectious moulds. Black Fungus can also develop on condensation lines and drip pans of air conditioners. Indians practising nasal water cleansing with unsterilized water have succumbed to Black Fungus in the past.

In a nutshell, the Black Fungus has been around us for thousands of years but India has never reported a sudden surge in cases until May 2021. Thus, the upsurge in Black Fungus cases amid the second wave of COVID-19 pandemic in India is mainly due to the unhygienic delivery of oxygen to the patients combined with indiscriminate and misguided use of steroids in the treatment of Covid-19.

What is Black Fungus?