Shaurya Chakra is an Indian military decoration awarded for gallantry, otherwise than in the face of the enemy. It may be awarded to civilians, also as military personnel, sometimes posthumously. Let us have a look at Shaurya Chakra's history, eligibility, design, etc. 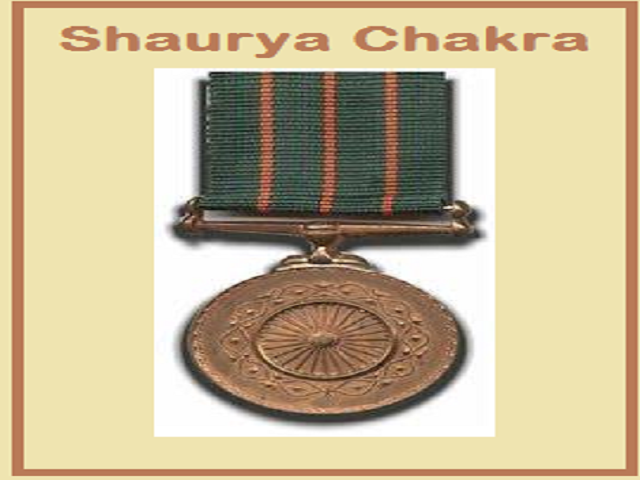 Shaurya Chakra is an Indian military decoration awarded for gallantry, otherwise than in the face of the enemy.

Gallantry Awards have been instituted by the Government of India to honour the act of courage and self-sacrifice of the officers/personnel of the Armed Forces and in addition to other lawfully constituted forces and civilians. These gallantry awards are announced twice in a year that is first on the occasion of the Republic Day and on the occasion of the Independence Day.

Before going into the detail about Shaurya Chakra, let us have a glimpse of other gallantry awards.

Therefore, Shaurya Chakra is third in order of precedence of peacetime gallantry awards and comes after the Ashoka Chakra and the Kirti Chakra. It precedes the Sena Medal.

On 4 January, 1952, it was established as the Ashoka Chakra, Class III by the Government of India, with effect from 15 August, 1947. On 27 January, 1967, the decoration was renamed as 'Shaurya Chakra' awarded for gallantry, otherwise than in the face of the enemy.

The following categories of personnel shall be eligible for the Shaurya Chakra:

1. Officers, men and women of all ranks of the Army, the Navy and the Air Force, of any of the Reserve Forces, of the Territorial Army, Militia, and of any other lawfully constituted forces.

2. The members of the Nursing Services of the Armed Forces.

3. Civilian citizens of either sex in all walks of life and members of Police Forces including Central Para-Military Forces and Railway Protection Force.
Shaurya Chakra is awarded for gallantry otherwise than in the face of the enemy and the decoration may be awarded posthumously.

Shaurya Chakra award constitutes Medal, Ribbon, and Bar. The details are given below:

1. Medal: It is circular in shape and made up of bronze. It is one and three-eighths inches in diameter.

2. Obverse: On the obverse of the medal, a replica of the Ashoka Chakra is embossed in the centre and is surrounded by a lotus wreath.

3. Reverse: On the reverse of the medal, the words "SHAURYA CHAKRA" shall be embossed both in Hindi and English and the two versions are separated by two lotus flowers.

5. Bar: If any recipient of Shaurya Chakra again performs such an act of gallantry and so it makes him or her eligible to receive the Chakra, such further act of gallantry will be recorded by a Bar which is to be attached to the riband by which the Chakra is suspended. A replica of the CHakra in miniature for every such Bar shall be added to the riband when worn alone.