Stephen Hawking was a renowned scientist of modern times. His contributions regarding universe, black hole theory and relativity is groundbreaking and do you know that recently Hawking's final scientific paper that has been completed before his death in March has now been written and released by his colleagues at Cambridge and Harvard University. 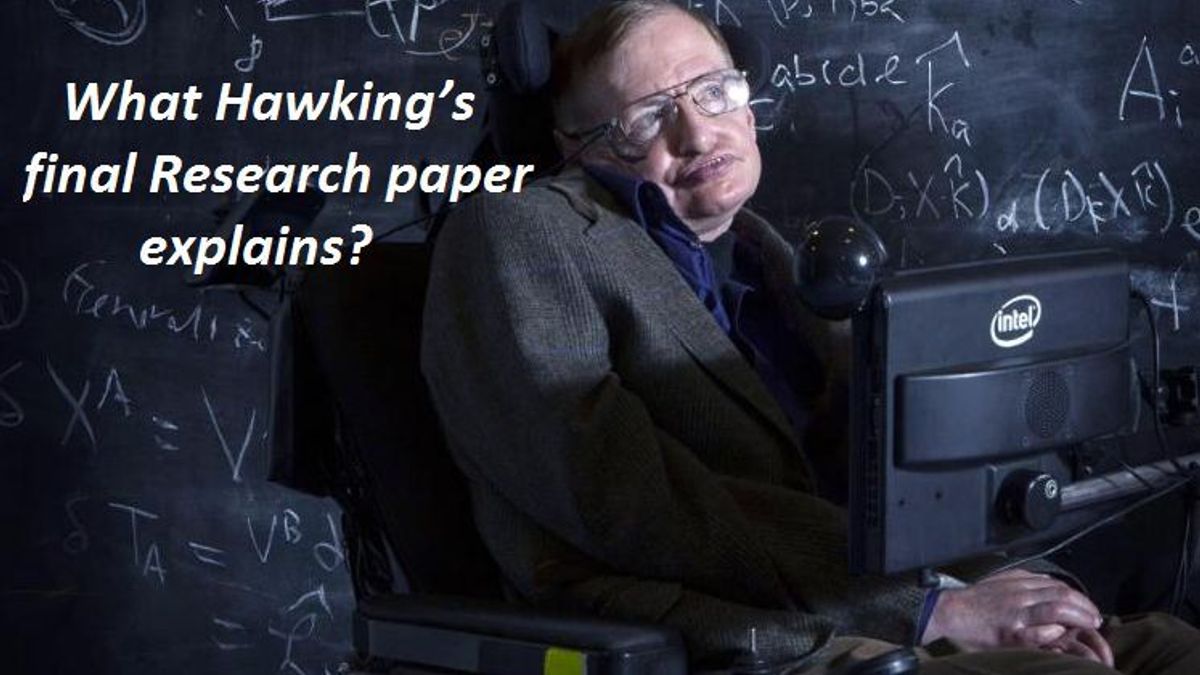 Now, let us study about Stephen Hawking’s final Research or Scientific paper and also about his discoveries.

The name of the Research paper is Black Hole Entropy and Soft Hair. In this paper he had discussed that what happen to information when it falls into a Black hole because mainly it has seen that theoretical physicist mostly faces a problem refer to as 'the information paradox' according to the researchers from Cambridge University.
This paper was written before Hawking's death in March but now his colleagues has written it and posted online for the world. Malcom Perry Co-author and a professor at Cambridge University said that the information paradox was “at the centre of Hawking's life" for over 40 years.

Do you know that in 1915, Albert Einstein published a theory of general relativity and described that how gravity arises from the space time-bending effects of matter. He had also made predictions about black holes also that it can be completely defined by three features namely mass, charge and spin. Round 60 years later, Stephen Hawking told that black holes have temperature also. Hot objects lose heat into space and so black hole evaporates out of existence. And the rules of quantum world are that information is never lost. So, question arises that what happen to the information which is contained in an object when it tumbles into a black hole. And about this only Hawking's last paper deals with.

Do you know about the proposal theory of Hawking?

Here, let us tell you that Ykov Borisovich Zel'dovich and Igor Dmitriyevich Novikov, the two Soviet physicists showed that at the initial stage of the Big Bang, at various points the densities would have been very high which results in the formation of small black holes which were known as 'primordial black holes'.

Now, question arises that Black holes are visible or not?

It has been said that black holes are not radiant that is will not be visible through any telescope. Albert Einstein, first time suggested about gravitational lensing. What is this? If by chance, a tiny primordial black hole eclipses a distant star and due to gravitational effect, light rays of the star will bend around the black hole which results into a bright star for a short period of time than the original. Let us tell you that this rare phenomenon can occur only when the star, the black hole and the observer on the Earth are aligned in a straight line.

Why actually star appears brighter? Due to gravitational attraction, the black hole is in alignment with a distant star, light rays bent inwards like a lens making the star to appear brighter.

What is the latest finding about primordial black hole?

The team of researchers used the Hyper Suprime-Cam on the Japanese Subaru telescope located in Hawaii to see whether there is any tell-tale evidence of primordial black holes between Earth and Andromeda galaxy using gravitational lensing technique. About 190 consecutive images for whole one night were taken by the research team of Andromeda galaxy. It is said that as Stephen Hawking postulated that there were tiny small invisible primordial black holes were present with masses lighter than the moon then; the team should have seen at least thousand gravitational lensing events. But, they were able to see at most one such event which shows that Hawking's theory is wrong that such black holes make up all dark matter.

Some facts about dark matter in space

- Dark matter is everywhere in space which is present in the universe but are invisible. Some Research says that 70% of the Universe is composed of dark energy.

- Dark matter can't be seen but has powerful impact on the space and binds galaxies together.

- Most of the scientists believed that dark matter is some sort of exotic particle that is of what they are made nobody knows.

- Some scientists believed that may be dark matter don't exist or are undiscovered particle. The effect that is associated with dark matter may be due to gravity.

- Basically, this is an unresolved puzzle of cosmology since 1930s which is named as 'Dark Matter'.

- Since matter appears due to gravitational attraction and is called 'dark' because it does not seem to interact with light.

So, now you may have come to know about the last Research or Scientific paper of Stephen Hawking.