Tabletop Airports: What is it and how many tabletop runways are in India?

Recently an Air India Express Plane crashed at the Kozhikode airport in Kerala after overshooting the runway. Do you know about tabletop airports, why such runways are dangerous for landing an aircraft, etc? Let us find out! 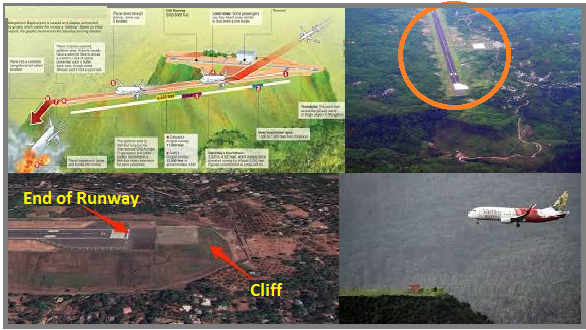 Air India Express Plane recently crashed at the Kozhikode airport and pointed out how tabletop runways can be risky. Around 18 people died and over 100 are injured. It has been seen that due to tabletop runways several flight crashes taken place because landing can be tricky and challenging for the pilots.

Do you remember the 2010 incident? Very similar accident at the tabletop airport took place at the Mangalore in 2010 in which around 160 people were killed.

Tabletop runways are generally constructed on a hilly or an elevated terrain. Such airports are built in such a way that there is a trench or valley at the front and back of the length of the runway. Or we can say that tabletop runways are located on top of a hill or a plateau with deep gorges running down their sides and are a stiff ask in poor weather conditions.

And so an accurate landing is very important. Tabletops are very tricky and are challenging even for the best of pilots. In such conditions, the slightest lapse can lead to fatal crashes. A pilot with national carrier Air India Ltd said "If visibility is poor and there are tailwinds, landing on a tabletop airport becomes a challenge."

According to a senior Air India pilot "automation might not help in the case of tabletop runways. An optical illusion can also be the issue where the runway might seem to be nearer whereas it would be further away. Some pilots also stressed that there is not much buffer zone, unlike normal runways.

At least five airports in India have tabletop runways namely Mangalore in Karnataka, Kozhikode in Kerala, Lengpui in Mizoram, Shimla in Himachal Pradesh and Pakyong in Sikkim.

The safety concerns were first raised by following the Air India Express crash in Mangalore in 2010 in which around 160 people killed on board.

The report of 2010 has cautioned of operations at such 'critical airfields'. Certain airfields were classified by DGCA as critical which need a special qualification for the flight crew to undertake operations. There are several factors on which basis airfields are classified as critical including terrain, length of the runway, a predominance of inclement weather, etc. And on this basis around 11 such airfields which include the tabletop runways including Mangalore, Kozhikode, and Lengpui and in addition airfields like Patna, Jammu, Leh, Port Blair, etc. are also qualify as 'critical airfields'.

Why are tabletop runways dangerous?

Firstly, such runways design is like that they have dangerous starts and ends. Pilots need excellent training to land on them. They can be hazardous also, no matter the weather or time of day. Another reason can be that the way the runways line up with the horizon and edge of the mountain creates an optical illusion that hides the drop. If pilots don't have experience at an airport might misjudge the remaining length of the runway and accidentally overshoot. At these runways, aircraft coming to land need to be extra careful and ensure that they hit the exact mark to land that is not too early and also not too late.

Do you know that a court of inquiry following the Mangalore crash recommended setting up an independent Indian Civil Aviation Safety Board (ICASB) urgently due to the rapid growth of aviation in the country? The aim of ICASB is to focus on all flight safety-related issues to suggest proactive measures to minimise accidents and incidents. Such type of Independent safety organisations has been set up like in the USA, UK, Canada, France, and Indonesia, etc.

Civil Aviation Safety Advisory Council (CASAC) one of the member Captain Mohan Ranganathan had also pointed that runway 10 of the Kozhikode airport could be risky for landing in tailwind conditions in rain. He also said that the airport does not have the minimum runway end safety areage.

So now you may have come to know about the tabletop airport and why are they dangerous.