World Sight Day 2020: It is observed on the second Thursday of October and this year it falls on 8 October. The Human eye works on the refraction of light through a natural convex lens made up of transparent living material and enables us to see things around us. Also, the ability to see is called vision, eyesight, or drishti. Sometimes a person cannot able to see distant or nearby objects clearly and have a defect of vision which can be fixed by wearing spectacles. 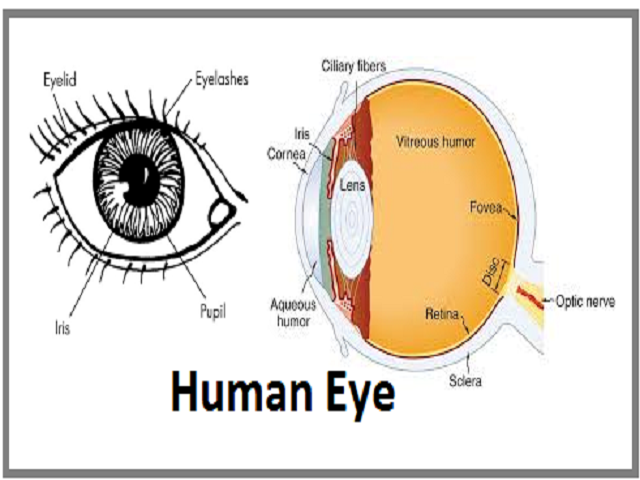 World Sight Day 2020: It is observed on the second Thursday of October and this year it falls on 8 October.  The day aims to focus attention worldwide on blindness and vision impairment.

The Human eye works on the refraction of light through a natural convex lens made up of transparent living material and enables us to see things around us. And the ability to see is called vision, eyesight, or drishti. The human eye consists of the cornea, iris, pupil, ciliary muscles, eye lens, retina, and optical nerve.

The front part of the eye called the cornea is made of a transparent substance and its outer surface is convex in shape. It is through the cornea that the light coming from objects enters the eyes. Just behind the cornea is the iris which is also called coloured diaphragm. A hole in the middle of the iris is called the pupil. Then behind it is the eye lens which is a convex lens. It is due to the support of ciliary muscles that the eye lens is held in position. The eye lens is flexible and thus can change its focal length and shape with the help of ciliary muscles.

Behind the eye lens is the retina on which the image is formed in the eye. Working of the Eye

The light rays coming from the object enter the eyes through the pupil and fall on the eye lens. The eye lens then converges the light rays and produce an image of the object on the retina which is real and inverted. Retina has a large number of light-sensitive cells that can generate electrical signals. After the image is formed on the retina it sends electrical signals to the brain and we have a sensation of image. Also, even though the image formed on the retina is inverted our mind interprets it as erect.

So, the eye lens is the convex lens and the retina is the screen of the eye.

The function of iris and pupil

The adjustment of the size of the pupil takes some time and this is the reason when we go outside in the sunlight from a dark room we feel glare in our eyes or if we enter a dark room after coming from outside we see things clearly after some time.

How do we see colours?

Seeing distant and nearby objects

Power of accommodation of the eye

The ability of the eye to focus distant as well as nearby objects clearly on the retina of the eye is called accommodation. And when our eyes see nearby objects then the ciliary muscles get stretched and its focal length decreases. Due to this, the converging power of the eye lens increases, and the diverging rays of light coming from objects converge to form an image on the retina. When the eyes see the nearby objects they are said to be accommodated.

The power of accommodation of a normal eye that enables it to see clearly an object is as close as 25 cm and as far as at infinity.

Defects of vision and their corrections

There are three common defects of vision. They are:

The defect of an eye in which it cannot see the distant objects clearly is called myopia. A person with myopia can see nearby objects clearly. Myopia is caused due to: Myopia or short-sightedness can be corrected by wearing spectacles containing a concave lens. This is because when a concave lens of suitable power is used for the myopic eye then the concave lens first diverges the parallel rays of light coming from a distant object. Therefore, first, a virtual image is formed at the far point of the myopic eye. Now since the rays of light appear to be coming from the eye’s far point, they are easily focussed by the eye-lens, and the image is formed on the retina. A concave lens is used for a myopic eye so as to decrease the converging power of the eye-lens. The formula for calculating the power of the concave lens to correct myopia is:

Hypermetropia or long-sightedness is a defect of an eye where a person cannot see nearby objects clearly. The near-point of the hypermetropic eye is more than 25 cm away. This defect of the eye is caused due to:

In the case of hypermetropia, the image of an object is formed behind the retina and therefore, a person cannot see clearly nearby objects. Correction of Hypermetropia: The convex lens forms a virtual image of the object (lying at normal near point N) at the near point N’ of this eye.

The formula for calculating power of convex lens to correct hypermetropia is:

In this formula, object distance that is u is normal near the point of the eye (25 cm).

This defect of vision usually happens in old age when ciliary muscles become weak and can no longer adjust the eye-lens. The muscles become inflexible in this condition and cannot see nearby objects clearly.

The near-point of an old person having presbyopia is much more than 25 cm. Presbyopia can be corrected by wearing spectacles having a convex lens.

Another point to be noted is that a person can have both myopia and hypermetropia. In such a condition, spectacles having a bifocal lens are worn. The upper part of the bifocal lens is concave and the lower part consists of a convex lens.

A yet another defect of the eye which usually comes in old age is the cataract. The medical condition in which the lens of the eye of a person becomes progressively cloudy resulting in blurred vision. It develops when the eye-lens of a person becomes cloudy due to the formation of a membrane over it. It decreases the vision of the eye gradually and can lead to a total loss of vision of the eye. It can be restored after getting surgery. The opaque lens is removed and an artificial lens is inserted in its place via operation. This defect cannot be corrected by any type of spectacle lenses.

Why do we have two eyes for vision?