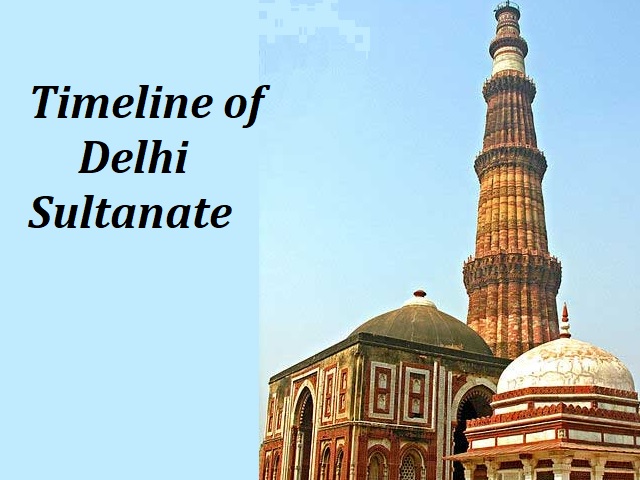 The establishment of Delhi Sultanate began with the invasion of Muhammad Ghori. He had brought a large number of slaves and appointment them as officers. When he died in AD 1206 resulted in a scramble for supremacy among his three generals- Qutub-ud-din Aibek (Commander of his army), Tajuddin Yalduz (ruled Karman and Sankuran between Afghanistan and Sind) and Nasiruddin Qubacha (held). Here, we are giving a timeline of Delhi Sultanate in chronological order and causes of decline of Delhi Sultanate. Reasons for the Success of Sultans of Delhi Sultanate

2. There was no central government

3. Kingdoms were small and scattered

4. Turks were better organized and took advantage of the lack of mutual cooperation among the Rajputs.

Causes of Decline of Delhi Sultanate

1. The rulers of Delhi Sultanate came in power with the help of a sword and army, so there was no definite law of succession.

2. Military strength was the main factor in succession to the throne, which later gave birth to political instability.

2. Nobles were very powerful and act as kingmakers who controlled the weak sultans.

3. Iqtadari, Zamindari and Jagirdari system led to the disintegration of Delhi Sultanate.

4. Invasion of Timurid Babar created havoc situation and became the main cause for the downfall of the Delhi Sultanate