What is bio toilet and how does it work?

Bio toilet is a decomposition mechanized toilet system which decomposes human excretory waste in the digester tank using specific high graded bacteria (aerobic or anaerobic) further converting it into methane gas and water. Bio toilet is a different toilet as compare to the traditional restrooms. It saves a lot of water and helps in keeping the station clean. 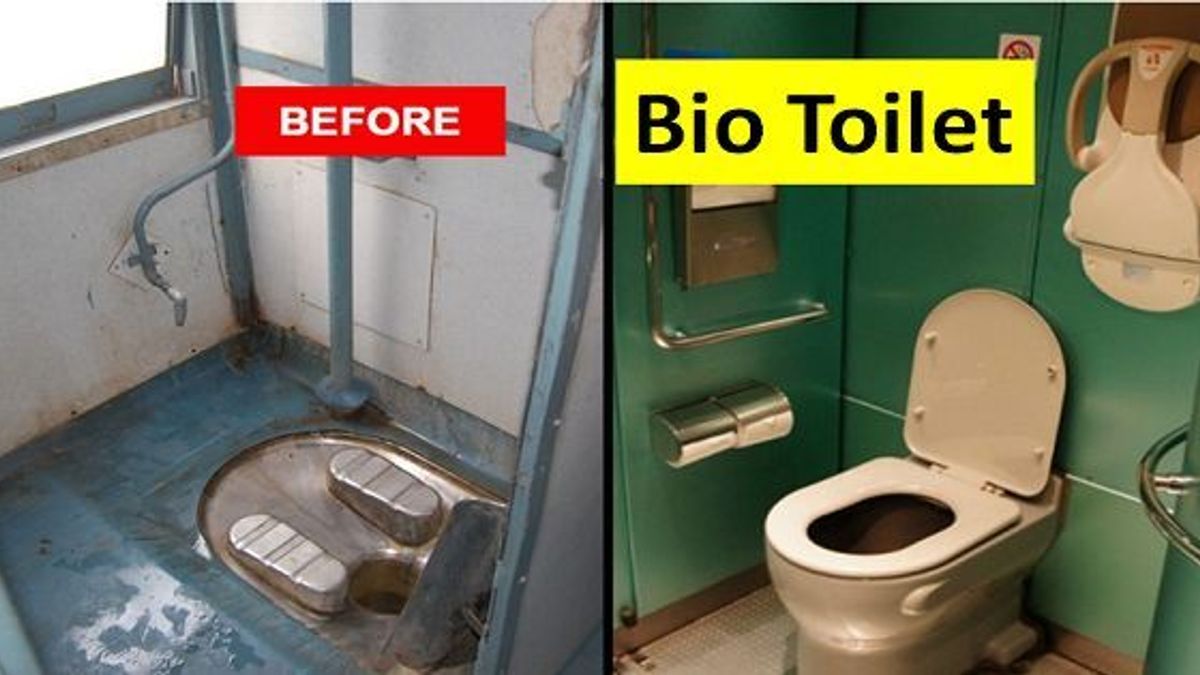 Even after 100 years of invention of flush toilet, today only 15% of people in the world have a flush toilet. You will be surprised to know that only 3% peoples of rural India and 25% of urban Indians have flush toilets.
The Indian government has restricted the practice of manual scavenging since 2013. So in order to compliance this order; the Indian Railways has decided to introduce bio-toilets in the trains.
Indian Railways have said that its goal is to install 1,440,000 bio-toilets in all 55,000 coaches under the “Clean Rail-Clean India” program by the end of 2019. More than 49,000 bio-toilets have been installed by the Indian Railways in the passenger coach till October 31, 2016.

What is Bio-toilet and how it works?
Bio-toilet is a decomposition mechanized toilet system which decomposes human excretory waste in the digester tank using specific high graded bacteria (aerobic or anaerobic) further converting it into methane gas, Carbon dioxide gas and water.

image soiurce:expressdrainage.com
Bio toilet is completely different toilet as compare to the traditional restrooms. It saves a lot of water and helps in keeping the environment clean.
Bio-digester technology treats human waste at the source. A collection of anaerobic bacteria that has been adapted to work at temperatures as low as -5°C and as high as 50°C act as inocula (seed material) to the bio-digesters and convert the organic human waste into water, methane, and carbon-dioxide gases.
The anaerobic process inactivates the pathogens responsible for water-borne diseases and treats the shit without the use of an external energy source.
Under the bio-toilet concept of the DRDO, the bio-digester tank in every toilet is filled with inoculums containing four types of bacteria. The water trap system in the toilet prevents air from getting into the tank, the human waste is processed by anaerobic bacteria in seven chambers in the tank and the methane gas is allowed to escape into the air.

After the completion of this process, only methane, carbon dioxide gases and water remains. These gases are left in the environment whereas water can be recycled and used in toilets again.

What are the benefits of Bio-Toilets?

1. In the traditional toilets; human excreta was released on the rail tracks directly causing damage to the metal of railway tracks as well as spreading the dirt in the environment. Now it will not happen.

2. Traditional toilets spent at least 10 to 15 liters of water in one flush, while vacuum-based bio-toilets need just half a liter of water.

3. India's stations will now become clean which will support “Swachh Bharat Abhiyan” of Government of India.

4. These bio toilets will provide respite to those who manually clean the shit at the platforms.

It is expected that after reading the above article, you must have come to know that what is bio-toilet and why is it essential for the India in the years to come.