Blockchain technology is associated with cryptocurrencies like bitcoin and others.

Have you ever imagined a world where there is not necessary to validate any sale or purchase with no receipts, no bank documents and no need of registering or disposal of property with the concerned government department?

We know that buying or selling of any property is put in a record. Before taking a commercial decision we always want that all the information should be available at one place. This is possible only when a technology of code writing in financial system circles all over the world. Isn't it. And this developed the root for Blockchain Technology.

While doing any transaction the main problem is about trust. Can one trust another party? This made a need for legally binding stamps and seals and to maintain records.

Several centuries ago, when populations and commerce were both a tiny fraction of what they are now, some communities maintained a ledger of all financial transactions, which was open to public scrutiny and anything mentioned in the ledger acquired the status of truth.

Gradually do you know what happened, these records become voluminous and to keep them or to maintain them was very difficult. And so it became the function of government departments and banks and was no longer freely available to the public.

Let us study through this article about pros and cons of Blockchain technology.

A Microsoft Excel Sheet file in your computer or laptop with the details of some of your transactions is known as a ledger.

If your Excel file is copied to hundreds of your friend's computers and connected to each other forming a network is known as distributed ledger. And if there will be a technology to update this Excel sheet whenever you or your friends update a ledger.

Therefore, blockchain is nothing but a digital ledger. That is a book containing accounts to which debits and credits are posted from books of original entry.

A blockchain is an anonymous online ledger that uses a data structure to simplify the way we transact. Without the help of third party blockchain allows users to manipulate the ledger in a secure way.

What is the difference between Li-Fi and Wi-Fi Technology?

Do you know who invented Blockchain Technology?

In 2008, Blockchain Technology was invented by Satoshi Nakamoto for use in the cryptocurrency bitcoin, as its public transaction ledger. He aims at creating the decentralized Bitcoin ledger and on the other hand the blockchain was to allow users to control their own money so that no third party, not even the government, would be able to access or monitor it.
Blockchain for bitcoin made it the first digital currency to solve the double spending problem without the need of a trusted central authority or central server.

Why Blockchain technology is required?

The blockchain technology is a method that brings everyone to the highest degree of accountability. With the help of this technology no more transactions will be missed, human or machine errors will be minimised etc. Even nowadays major banks are experimenting this technology as they can use it for money transfers, record keeping and other backend functions. As an un-alterable ledger in real time it enables them to track documentation and authenticate ownership of assets digitally. Also, Indian IT service providers like Infosys and TCS companies are using this technology to create core banking platforms for banks. 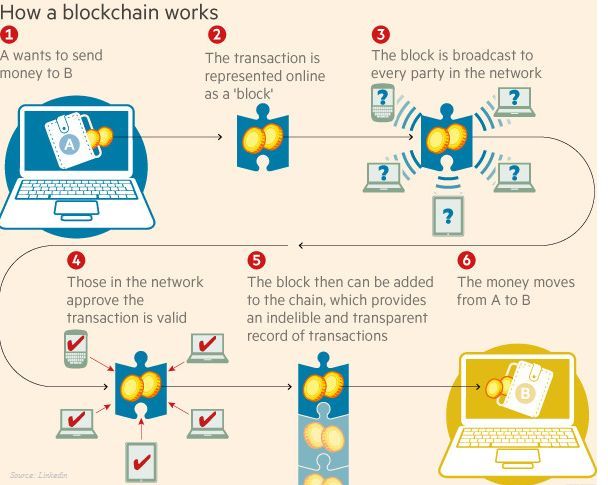 - It will allow smart devices to speak to each other better and faster.

- Blockchain mechanism brings everyone to the highest degree of accountability. Therefore, solves the problem of manipulation.

- The data that belongs to us we can own it that is online identity and reputation will be decentralised.

- Cryptocurrencies will take the power from the government to control the value of currencies and hand it to people.

- It will allow middleman-free way to exchange asset.

- It will allow the removal of intermediaries that are involved in record keeping and transfer of assets.

- It provides durability, reliability, and longevity with decentralised network.

- The data that are entered in blockchain based systems are immutable which prevent against fraud through manipulating transactions and the history of data. Therefore, all the transactions can be investigated and audited easily.

How does Cash Recycler Machine work against fake currency?

- To verify all the transactions huge power i.e. electricity is required.

- There should be security about the private key. Every time private key must remain secret because revealing it to third parties is equivalent to giving them control over the bitcoins secured by that key. Also, it is necessary to have a back up of the private key so that it can be protected from accidental loss. We know that if it is lost ones cannot be recovered and the funds secured by it are lost forever.

- We know blocks in a chain must be verified by the distributed network and it can take time. So, transaction speed can be an issue.

Is Blockchain technology safe to use?

Hope from the above discussion, it is clear that no doubt blockchain architecture can significantly bring down the costs and reduce inefficiencies in the financial sector. As, it allows two parties to execute a transaction without any intermediary. Without any human intervention blockchain allows financial institutions to execute and verify transactions discretely. And transactions are continuously maintained and verified in ‘blocks’ of records.

With the advancement of technology and the development of society the main goal of the government is to provide a method for a secure way of transactions. Whether methods are advanced or new technologies are emerging but the goal is same. As, blockchain allows consumers and suppliers to connect directly, removing the need for a third party.

When three online bill-discounting exchange platforms came together, the first blockchain-based network went live and implemented a solution for their operations. The three platforms that offer Trade Receivables Discounting System (TReDS) are Receivables Exchange of India, A.TReDS and M1xchange that implemented the use of blockchain in the enterprise financial segment.
Let us tell you that Receivables financing is one of the fastest growing and most efficient trade finance mechanisms for small businesses to gain credit. US-based MonetaGo has designed and implemented the production solution. No doubt the technology will allow to work with the other exchanges to achieve shared goals without sharing specific data.

RBI introduced TReDS to facilitate financing trade receivables of micro, small and medium enterprise (MSMEs) from corporate buyers through multiple financers. Without any cryptocurrency being used for settlement the project has been implemented. As we know that Cryptography involves creating written or generated codes that allow information to be kept secret. Receivables Exchange of India (RXIL) is promoted by the National Stock Exchange and Small Industries Development Bank of India (Sidbi).

What happens on internet in 1 minute