Do you know about Solar Tsunami, mystery behind solar tsunami, whether it will hit earth surface, what are the predictions of physicists, scientists regarding solar tsunami, why it is necessary to study about it, when it occurs, how it can be seen and when etc. Let us find out answers of such questions through this article. 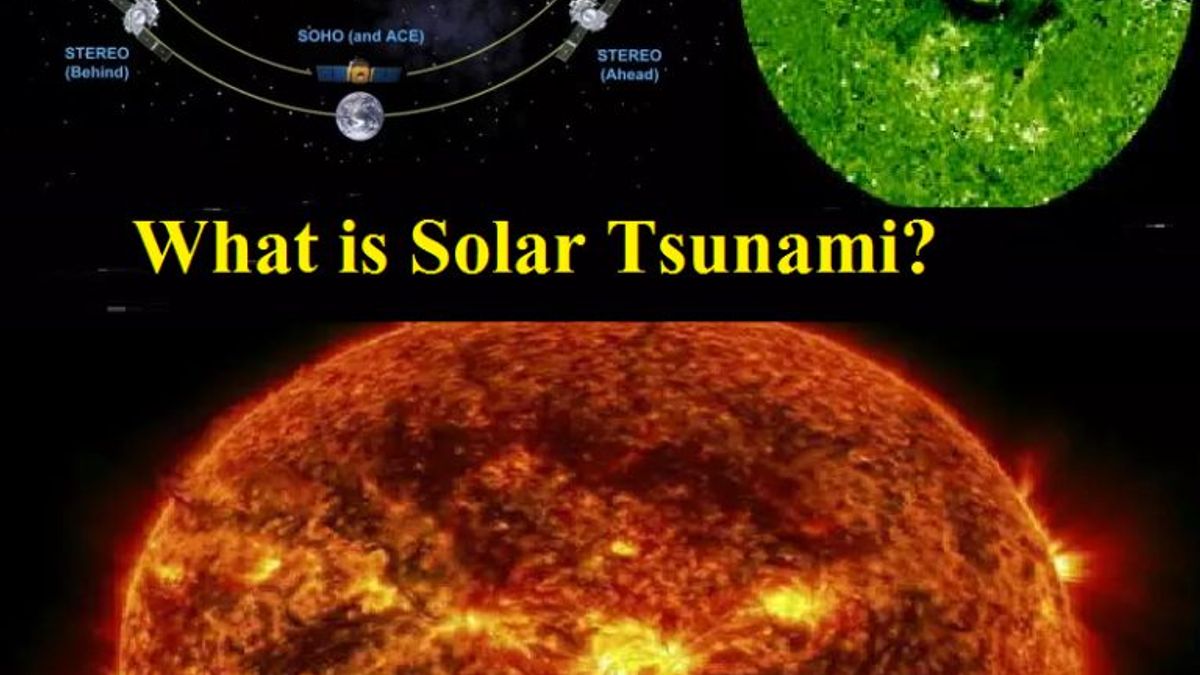 A recent research done by solar physicists suggested that the "solar dynamo" is linked to the production of sunspots. According to them, a "solar Tsunami" is at work that triggers the new sunspot cycle, after the old one ends. So, let us study about Solar Tsunami.

Do you know that a Moreton-Ramsey wave or a Moreton Wave is the chromospheric signature of a large-scale solar coronal shock wave and they are described as a kind of "solar tsunami" because they are generated by the solar flares?

We can say that Solar Tsunami is a hot plasma wave racing across the sun's surface. They are nothing but a Moreton wave. It is also known as 'MHD wave'. These waves are named after Gail Moreton, American astronomer, Gail Moreton, first observed solar tsunamis in 1959 using time-lapse photography. At the time, Moreton was working as an observer at the Lockheed Solar Observatory in Burbank. He discovered them in time-lapse photography of the chromospheres in the light of the Balmer alpha transition.

So, Solar Tsunami is tsunami like shock wave formed and radiated from sun. Scientists have concluded till now from their studies on solar tsunami that there may be tremendous magnetic eruptions on the sun's surface causing turbulence of electrically charged particles around the sun's surface and the huge charge particles are moving towards all the planets surrounding the sun.

Also, the magnetic field of the sun, from which sunspots get generated, wraps around the sun in the east-west direction. Let us tell you that these magnetic fields behave like rubber bands on a polished sphere. They tend to slip towards the poles. Holding these fields in their place requires that there is an extra mass that is plasma mass pushing bands from higher latitudes. Thus, a big mass of plasma is stored and a magnetic dam is formed.

It is said that at the end of the solar cycle, this magnetic dam can break; realising huge amounts of plasma cascading like a tsunami towards the poles. Do you know that these tsunami waves travel at high speeds of about 1,000 km per hour carrying excess plasma to the mid-latitudes? There magnetic flux eruptions are generated. These are seen as the bright patches that signal the start of the next cycle of sunspots.

Why it is necessary to study about Solar Tsunami?

The solar cycle and the activity of sunspot are intimately connected with space weather. The model also provides a sound physical mechanism that why we should expect the next 25th sunspot cycle to begin in the year 2020. Solar Tsunamis are also likely to spark spectacular displays of the aurora or northern and southern lights. Also, it is said that a really big solar eruption could destroy satellites and wreck power and communications grids around the globe.

Do you know about Solar Dynamo? Let us study!

The solar dynamo is a physical process that generates the Sun’s magnetic field. It is a naturally occurring electric generator in the interior of the Sun. It produces electric currents and a magnetic field, following the laws of Ampere, Faraday and Ohm. As well as the laws of hydrodynamics, which together form the laws of magneto hydrodynamics? About 20,000 km below the sun’s surface cause, the extreme temperature and pressure conditions prevailed and some material is formed consisting of plasma and primarily hydrogen and helium in a highly ionised state. Inside the sun, the plasma is confined with huge magnetic fields.

So, now you may have come to know about Solar Tsunami. They are essentially large-scale solar coronal shock waves. These shock waves are generated by the solar flares as they stream from the Sun. Scientifically, this tsunami is known as Moreton Waves.

EMISAT: An Eye in the Sky