What is the difference between Judge and Magistrate?

Magistrates and Judges seem to be the same in the Judiciary but this is not true. There are differences especially in the nature of their powers. Let us study about Magistrate, Judge, and the differences between them. 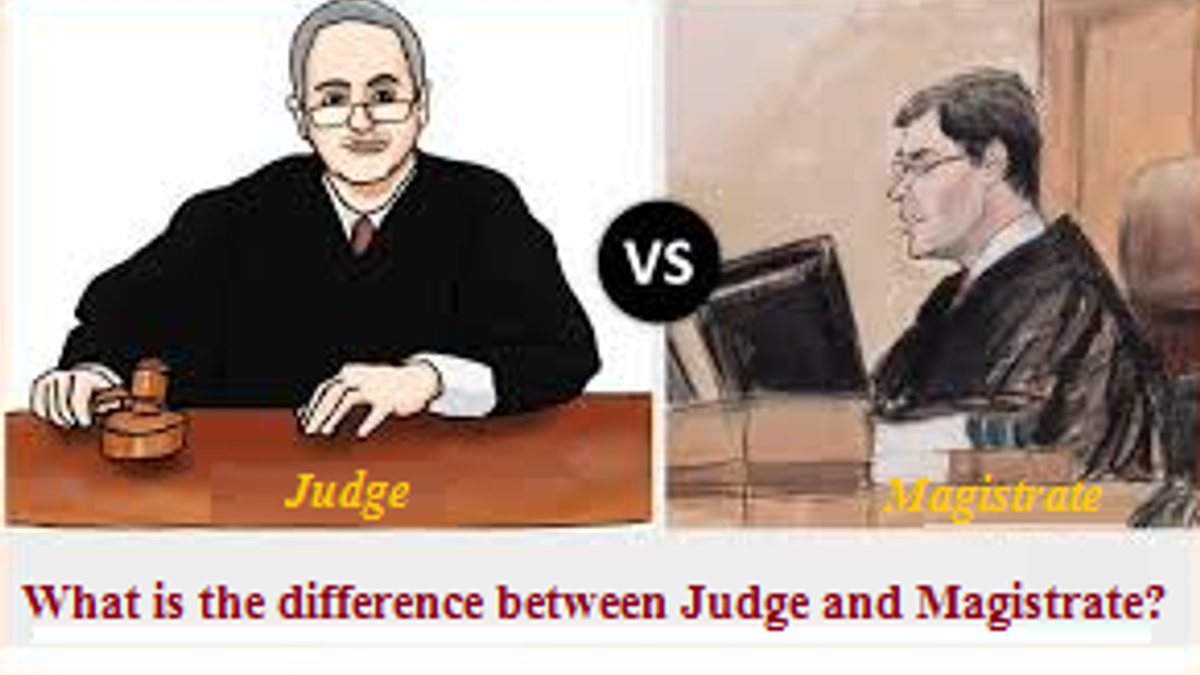 What is the difference between Judge and Magistrate?
The judiciary is a constitutional body that protects the interests of citizens. This is the final authority that explains legal matters and constitutional arrangements. It plays an important role in enacting laws and making decisions on disputes between citizens, states, and other parties. Courts maintain law and order in the country to protect the rights. Judges are the heads of the Supreme Court, High Court, and other subordinate courts. Judges are not equal to the magistrates; their powers are relatively less than the judge. The jurisdiction of a magistrate is usually a district or a city. Let's study the difference between the judge and the magistrate through this article.

A magistrate is a civil servant who manages the law in a particular area, i.e. district or city. The word 'magistrate' is derived from the old French word 'Magistrat', which means "Civil officers in charge of administrating laws" which also means "A magistrate, public machinery". This is the person who listens to civil or criminal matters and makes a decision. It will not be wrong to say that the District Magistrate or District Collector is the Chief Executive, Administrative, and Revenue Officer. He establishes necessary coordination between various government agencies working in the district.

Who is a Judge?

A judge is a person who takes a decision. That is, a judge is a person who abides by the court's proceedings, either alone, or with the panel of the judges. In terms of the law, a judge has been described as a judicial officer who manages the proceedings of the court and considers several facts and details of the matter like legal matters that are decided to hear and make decisions. Therefore, he is a Judicial officer appointed to hear and decide matters relating to law. The word 'Judge' has been derived from the Anglo-French word 'Juger' which means 'To form an opinion about'. Also, from Latin 'Judicare' which means 'to judge, to examine officially, form an opinion upon and pronounce judgement'.

What is the difference between the Magistrate and the Judge?

- A judge can be described as an arbitrator, i.e. the person who decides on a matter in the court. On the contrary, a magistrate is a regional judicial officer who is elected by the judges of the high court of the state to maintain law and order in a particular area or region.

- A magistrate makes decisions on small or minor matters. In fact, the Magistrate gives initial decisions in criminal cases. He is known to have powers more of an administrator. On the contrary, the judge makes decisions in serious and complex cases, in which knowledge of the law and the ability to make a personal decision is very essential.

- Magistrate has limited jurisdiction over a judge.

- Contrary to a judge, a magistrate only has limited law enforcement and administrative powers.

- Magistrate has the power to impose fines and imprisonment for a specific period. But judges have the right to pass a sentence of death or life imprisonment.

Now you may have understood that the judge can decide on a certain matter in the court. The verdict by the Supreme Court Judge is final and no appeal can be made for this. On the other hand, the magistrate is like an administrator who takes care of the law and order in the special area.

Who appoints the Magistrate?

High Courts appoint the Magistrate. The Jurisdiction of a Magistrate is smaller when compared to a Judge.

Who is a magistrate?

A magistrate is a civil servant who manages the law in a particular area, i.e. district or city. The word 'magistrate' is derived from the old French word 'Magistrat', which means "Civil officers in charge of administrating laws" which also means "A magistrate, public machinery". The mandate of the Magistrate is to handle minor cases.

Who is a Judge?

Judge is a public official vested with the authority to hear, determine and preside over legal matters brought in the court of law.

Who created the post of District Magistrate and when?

In 1772, Warren Hasting created the post of District Magistrate. At that time, he was the head of the revenue organizations. He was also responsible for the registration of land, division of fields, settlement of disputes, management of mortgages, giving loans to farmers, and drought relief, etc.
Comment ()