How does Duckworth-Lewis-stern method work?

Duckworth Lewis Method: Cricket is currently counted among the most popular sports in the world after football and Rugby World cups. The enjoyment of the game affects when the rain interrupts the match. In such condition the Duckworth Lewis Method is used. Let’s read in detail that how this method decides the winner of the match.

Inventor of the Duckworth Lewis method;

The method is the invention of statistician Frank Duckworth and Tony Lewis. On the name of these two guys this method is popular as Duckworth Lewis method.

Very first use of the Duckworth Lewis method;

In the international cricket this method was used first time in 1996-97 between a Zimbabwe-England match. This method was approved by the ICC in 1999.

Duckworth Lewis Method: How this method can be used?

As per the method there are two types of resources are available with every team.

These two resources are;

These two resources are used at every point of time in the match.

On the basis of these two resources, Frank Duckworth and Tony Lewis have prepared a chart which suggests that how many resources are left with the batting side in different situations.

On seeing this chart, it is clearly visible  that when a team has entire 50 overs and 10 wickets before the starting of the game; it can be said that the team possesses 100 percent resources.

After this, as soon as the team uses its overs and the wickets it means the resources of the team decrease as the game progresses. 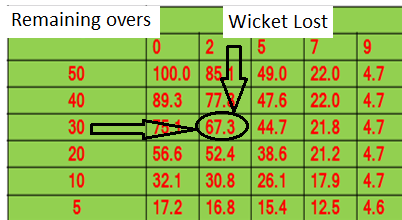 Now suppose the rains comes at this point and match-time of 10 overs washed out it means the batting side is left with only 20 overs and it already has lost two wickets; so as per the Duckworth-Lewis method the batting team  owns just 52.4% resources in hands.

See in the Table below; 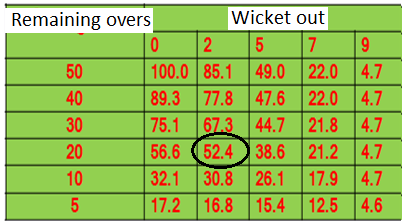 In other words, it can be said that 14.9% resources of the second team have washed out in the rain.

But till now this explanation seems biased because first team has used 100% while the second team or batting second team has just 85.10 resources.  So  to ensure a fair play, both the team should have equal resources.  In this condition the Duckworth Lewis method will reduce the target set by the batting first team.

The Duckworth Lewis method says that if the rain affects the inning of second team then the target should be modified. Hence the target set  by the first team will be reduced.

And if the rain affects the team batting first, then its target will be increased, which means this team will have to chase more runs.

Let see all this through an Example:

If the rain affects the team which bats later or plays second inning then: -

Suppose the first team scored 300 runs in 50 overs and the second team has scored 250/4 in 40 overs. After this, match could not be played then the Duckworth Lewis method will be applied to find the winner of such match.

According to the Duckworth Lewis chart, in this situation second batting team is left with 26.1 percent resources. Now suppose from this moment onwards the match is abandoned.

Now there is difference in the resources available to the both team. As we know first team has used its 100% resources while the second team has used just 100-26.1= 73.9%. 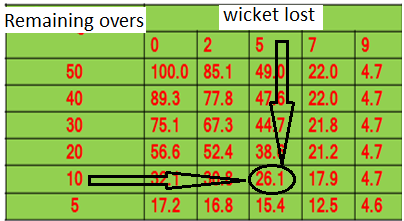 Now the winner of the match will be decided on the basis of equal distribution of resources to both team.

So as per the rules the second team needs to score 222 runs to win the match but is has already scored 250 runs.

We hope that from the above discussion you must got clear idea that how that Duckworth-Lewis method is applied in the rain affected match.

Jasprit Bumrah: List of Records in all International Formats