Ram Janmabhoomi: Ayodhya is situated on the bank of holy river Saryu, Uttar Pradesh. It is the headquarter of Ayodhya District and Ayodhya division. It is known as the birthplace of Lord Rama. Let us have a look at Ayodhya, where is it situated, how to reach, places of interest, etc. 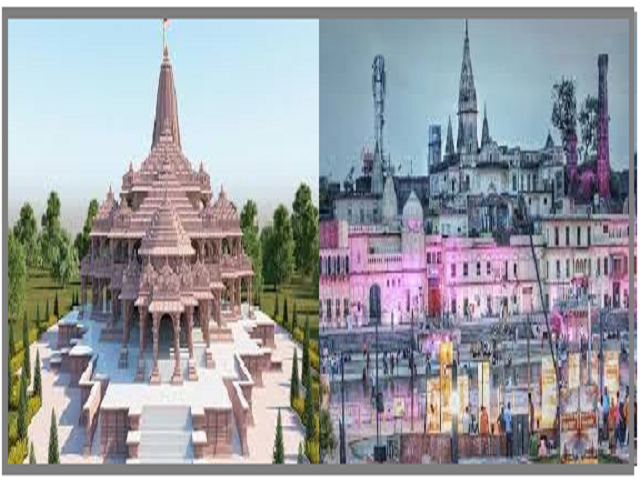 Ram Janmabhoomi: Ayodhya, the city of Lord Rama. Ramcharitmanas of Tulsidas tells the story of Lord Rama which was written in Awadhi, the local dialect. Ayodhya was also known as Saket which is an ancient city of India. It is the birthplace of Lord Rama. It was used to be the capital of the ancient Kosala Kingdom. It is regarded as one of the seven sacred cities and an important pilgrim place for Hindus in India. The place also attracts pilgrims from across the country.

As we know that on 5 August, 2020, the groundbreaking ceremony of the laying foundation stone of the Ram Mandir in Ayodhya will take place. About 175 guests have been invited to the ceremony. Prime Minister Narendra Modi is expected to arrive in Ayodhya today. The Bhumi Pujan ceremony will start at 12:30 pm on 5 August, 2020.

The city has been painted yellow which represents the colour of knowledge and learning. The ceremony will broadcast live by Doordarshan. In the ceremony, keeping the COVID-19 norms, the seating arrangements have been made in such a way that all the invitees will sit at a distance of six feet.

It is located in center of the state of Uttar Pradesh, in the northern region of India. It is situated on the bank of River Saryu and is a part of great northern plains. Ayodhya's climate is tropical that is summers are hot and winters are cool. The southwestern monsoon rains hit Ayodhya in about July-September. It is around 130 km from the east of Lucknow and around 7 km from Faizabad.

Being the birthplace of Lord Rama and an ancient city, it has several temples, historical places to visit. There is a Ram Janmabhoomi or birthplace of Lord Rama that can be visited. Other places are as follows: Ram Ki Paidi, Jain Temple, Birla Temple, Gulab Bari, Bahu Begum ka Maqbara, Kanak Bhawan, Naya Ghat, Guptar Ghat, and Military Temple, etc.

From the kingdom of Suryavanshis, the cultural heritage of the district originates. Because of the King Raghu in the lineage of Suryavanshi Kshatriyas, the Suryavansh became popular as Raghuvansh. The birth of Lord Rama took place in the third generation of the King Raghu. No doubt, in the history of ancient India, the period of the Ramayana was the most glorious period. The era was not only famous for the composition of holiest scriptures, the Vedas, and other literature that laid the foundation of Indian culture and civilisation but also for its exemplary rule of law and truthfulness. Lord Rama was the 'Adarsh Purush' of the Ramayana. His fourteen years of exile or Vanvaas set an example for others. Apart from this Faizabad also had a special place in Indian history. It also consists of several historical and religious places.

Ayodhya: How to reach

Ayodhya is well connected with other places via road and is located on the main highway, which runs through the town on the way from Faizabad to Gorakhpur. Services of Uttar Pradesh Transport Corporation buses are available 24 hours each day. From several places buses are also available that are from Varanasi, Allahabad, etc. as per their schedule.

The nearest airport from Faizabad is Lucknow International Airport.  From Gorakhpur, Allahabad, and Varanasi Airports, people can also reach.

So now you may have come to know about Ayodhya, its heritage and culture, places of interest, and how to reach Ayodhya.