Who was Veer Savarkar and how he contributed in National Freedom Struggle Movement?

PM Narendra Modi paid tribute to the great freedom fighter and patriot Veer Savarkar on his birth anniversary. He was born on 28 May, 1883 in the village Bhagpur, Nashik. Let us read more about Veer Savarkar and his contributions to the National Freedom Struggle. 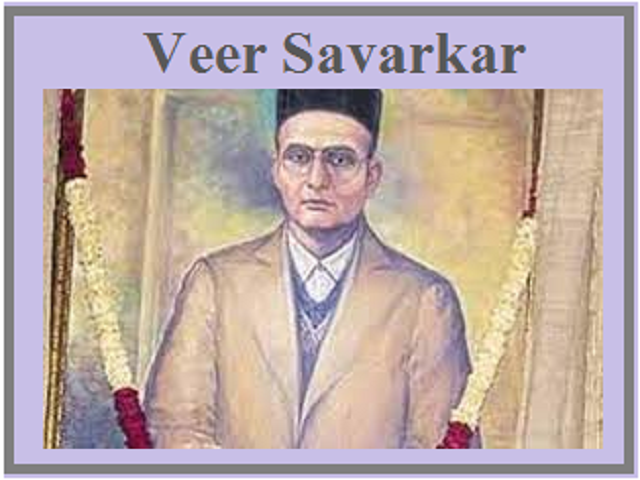 Veer Savarkar was born on 28 May, 1883 in the village Bhagpur, Nashik and died on 26 February, 1966, Bombay (now Mumbai). His full name is Vinayak Damodar Savarkar. He was a freedom fighter, politician, lawyer, social reformer, and formulator of the philosophy of Hindutva. PM Narendra Modi paid tributes to the great freedom fighter and patriot Veer Savarkar on his birth anniversary. He tweeted

His father's name was Damodarpant Savarkar and mother was Radhabai. He lost his parents at an early age. He was strongly influenced by his elder brother Ganesh (Babarao).

Barrister at the Honourable Society of Gray's Inn, London

Prison Journey: Veer Savarkar was prisoned by the Britishers for about 50 years. He was shifted to Cellular Jail, Andaman and Nicobar Islands.

His famous slogan: "Hinduize all Politics and Militarise Hindudom".

Famous as: For his contribution to the Indian Independence Movement.

Veer Savarkar and his contributions to the Freedom struggle movement

Veer Savarkar was born to a Brahmin Hindu family on 28 May, 1883, at Bhagour, Nashik District. His siblings were Ganesh, Mainabai, and Narayan. He was known for his bravery and so earned the nickname 'Veer' that is a courageous person. He was influenced by his elder brother Ganesh who had played an influential role in his teenage life. Veer Savarkar also became a revolutionary young man. When he was young, he organised a youth group named 'Mitra Mela'. He was inspired by radical political leaders like Lala Lajpat Rai, Bal Gangadhar Tilak, and Bipin Chandra Pal and engages the group in revolutionary activities. He enrolled himself at 'Fergusson College' in Pune and completed his Bachelor’s Degree.

He received an offer to study law in England and offered a scholarship. He was helped by Shyamji Krishna Varma to sent him England and pursue his studies. He enrolled there at 'Gray's Inn Law College' and took shelter at 'India House'. It was a student residence in North London. In London, Veer Savarkar inspired his fellow Indian students and formed an organisation 'Free India Society' to fight against Britishers for freedom.

When and Why the British first landed on the Indian Territory?

On the lines of the 'Revolt of 1857', Veer Savarkar thought of the guerrilla war for attaining Independence. He wrote a book titled "The History of the War of Indian Independence" which inspired a lot of Indians to fight against the British for freedom. Though the book was banned by the British but it gained popularity in several countries. Not only this, he made manual bombs and guerrilla warfare and distributed them among friends. He also provided legal defence to his friend Madan Lal Dhingra, who was accused in a murder case of a British Indian army officer named Sir William Hutt Curzon Wyllie.

How was he sentenced to 50 years of imprisonment?

Meanwhile, in India Veer Savarkar’s elder brother organised a protest against the 'Indian Council Act 1909' also known as Minto-Morley Reform. Further, with the protest, the British Police claimed that Veer Savarkar had plotted in crime and issued a warrant against him. To evade the arrest, Veer Savarkar was escaped to Paris and there he took shelter at Bhikaji Cama's residence. On 13 March, 1910, he was arrested by the British police but the French Government got irritated when British authorities had not initiated appropriate legal proceedings to arrest Veer Savarkar in Paris.

The Permanent Court of International Arbitration was handling the dispute between the British authorities and the French government and gave a verdict in 1911. Let us tell you that the verdict came out against Veer Savarkar and he was sentenced to 50 years of imprisonment and sent back to Bombay. Later, he was taken to the Andaman and Nicobar Island on 4 July, 1911. There, he was locked at 'cellular Jail' famous as Kala Pani. He was severely tortured in Jail. But his national freedom spirit continued and there he started teaching his fellow prisoners to read and write. He also took permission from the government to begin a basic library in the prison.

Work done by Veer Savarkar in the Prison

During his prison time, he wrote an ideological pamphlet known as Hindutva: Who is a Hindu?' And this was published by Savarkar's supporters. In the pamphlet, he described Hindu as a patriotic and proud inhabitant of 'Bharatvarsha' (India) and so influenced several Hindus. He also described several religions as one and the same as Jainism, Buddhism, Sikhism, and Hinduism. According to him, all these religions can support the creation of 'Akhand Bharat' (United India or Greater India).

He was a self-proclaimed atheist, always proud to be a Hindu, and described it as a political and cultural identity. Savarkar was released from the prison on 6 January, 1924 and played a crucial role in generating 'Ratnagiri Hindu Sabha'. This organisation aimed to preserve the social and cultural heritage of the Hindus.

Veer Savarkar in 1937, became the president of 'Hindu Mahasabha'. On the other side and same time, Muhammad Ali Jinnah declared Congress rule as 'Hindu Raj', which had worsened the already rising tension between the Hindus and the Muslims. Veer Savarkar is a president of 'Hindu Mahasabha', encouraged Hindus to support the British in the Second World War.

We can't ignore that Veer Savarkar, on the other hand, was a fierce critic of the Indian National Congress (INC) and Mahatma Gandhi. He opposed the 'Quit India Movement' and later objected to INC's acceptance of the Indian partition. He proposed the co-existence of two nations in one country.

A biopic was also created by Sudhir Phadke and Ved Rahi named Veer Savarkar. In the biopic, Shailendra Gaur played the role of Veer Savarkar.

Other important works of Veer Savarkar

He wrote 'The Indian War of Independence'. In his book 'Kale Pani', he mentioned his cellular jail struggle of Indian Independence. He criticised Mahatma Gandhi's politics and wrote a book titled 'Gandhi Gondhal'. He penned several poems like 'Jayostute' and 'Sagara Pran Talmalala'. He also created several neologisms like 'Hutatma', 'Digdarshak', 'Doordhwani', 'Sansad', Tanklekhan', 'Mahapaur' etc. among others.

At last, we can conclude that Veer Savarkar's philosophy was no doubt unique and consists of various elements like ethical, theological, and philosophical theories. In fact, his political philosophy is a mixture of humanism, rationalism, universalism, positivism, utilitarianism, and realism. He also worked against some of India's social evils like caste discrimination and untouchability. His, books motivated youth and because of his courageous behaviour he had earned the nickname 'Veer' and came to be known as Veer Savarkar.

Comparison between Moderates and Extremist Leadership of Congress

What is Hindutva according to Savarkar?

Name the youth group organised by Veer Savarkar at a young age?

Veer Savarkar also became a revolutionary young man. When he was young, he organised a youth group named 'Mitra Mela'.

Is there any movie on Veer Savarkar in Malayalam?

Kaala Pani was a Malayalam movie created on Veer Savarkar, directed by Priyadarshan in 1996.

In which book Veer Savarkar mentioned his cellular jail struggle of Indian Independence?

In his book 'Kale Pani', he mentioned about cellular jail struggle of Indian Independence.
Comment ()