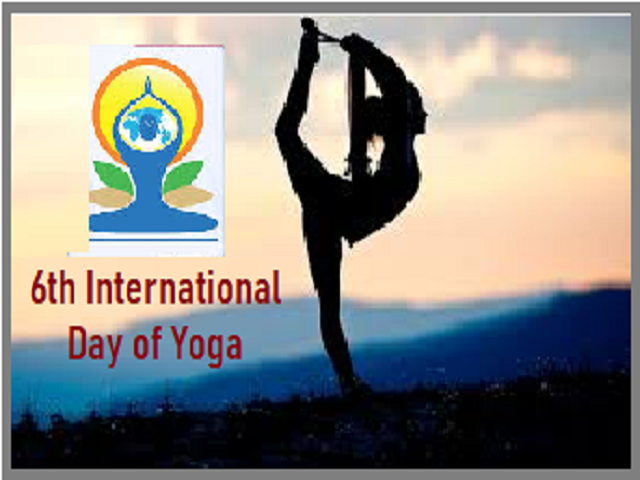 Why is International Day of Yoga celebrated?

International Yoga Day 2020: This year the International Yoga Day will focus on yoga at home with family members. Prime Minister Narendra Modi called upon all to participate in an event 'My Life My Yoga' in his 'Mann Ki Baat'. He also encouraged people to stay active and fit during the lockdown period due to COVID-19 pandemic.

'My Life My Yoga' is a unique international video blog competition announced by the Ministry of Ayush along with the Indian Council of Cultural Relations. In this, the participants have to make a three minutes video of performing yoga 'asanas' and put it on the social media platforms, with the #MyLifeMyYoga hashtag and their country name, while tagging the Ayush ministry. Let us tell you that the contest was started on 1 June and videos can be submitted till 15 June. The MoA and the ICCR have therefore decided to extend the submission deadline to coincide with the International Day of Yoga which is the 21st of June.

About the contest:
It will run in two legs; The first leg consists of country-wise video blogging contests, where the winners will be selected at the country level. And will be followed by the global prize winners who will be selected from different countries.
Under three categories the entries can be submitted by the participants covering the youth (aged under 18), the adults (above 18 years) and the Yoga professionals, separately for males and females. Within the first leg the prize for Indian contestants worth INR. 1 lakh, 50K and 25K for the 1st, 2nd and 3rd rank within each of the categories. And at the global level  US$2500, US$1500, US$1,000 for 1st, 2nd, and 3rd ranking have been announced.

International Yoga Day is celebrated on 21st June throughout the world. For the first time, it was celebrated on 21 June, 2015. As we all know the environment is changing and the world is becoming more competent yoga help us to deal with this type of environment and also makes us healthy.

The day spread awareness about the importance and effects of yoga on the health of the people. The word 'yoga' is derived from Sanskrit which means to join or to unite.

Yoga is an ancient physical, mental and spiritual practice which gives calmness, peace, confidence and courage to the people through which they can do several activities in a better way. At every level of existence, it is a state of harmony. Yoga is practised in various forms around the world.

Let us study why International Day of Yoga is celebrated, its history, theme of 2020 and how is it celebrated across the globe.

The International Yoga Day 2020 theme is "Yoga at Home and Yoga with Family".

The International Yoga Day 2019 theme was "Climate Change" and it will be celebrated at United Nation on 20 June, 2019 with "Yoga with Gurus" followed by a panel discussion on 21 June.

International Day of Yoga is also called World Yoga Day. For the first time, it was celebrated on 21 June 2015. This initiative was taken by the Prime Minister of India Narendra Modi by giving an impactful speech related to yoga on 27 September 2014 in the United Nations General Assembly and for this reason, on 21 June, it was declared as "International Yoga Day". The proposal to celebrate the International Yoga Day on 21 June in the United States was approved by 193 members on 11 December 2014.

In the UN General Assembly, Narendra Modi said "Yoga is an invaluable gift of India’s ancient tradition. It embodies unity of mind and body; thought and action; restraint and fulfilment; harmony between man and nature; a holistic approach to health and well-being. It is not about exercise but to discover the sense of oneness with yourself, the world and nature. By changing our lifestyle and creating consciousness, it can help us deal with climate change. Let us work towards adopting an International Yoga Day”.

Sam Kutesa, President of UN General Assembly, announced to celebrate the International Yoga Day on June 21 and more than 170 countries supported the Yoga Day proposal. From this it came into light that people also know about the benefits of yoga, some of which are visible and some are invisible.

Why do we touch the feet of our elders? Scientific Reasons?

Do you know where Yoga was started? In 1893, Swami Vivekananda addressed the World Parliament of Religions in Chicago, America in which he introduced yoga to the Western world. After that, many eastern gurus and yogis spread yoga throughout the world and on a large scale, people started accepting it. Even yoga began to be studied in the form of a subject, and then it came out that there are long-term benefits of yoga.

In the last fifty years, this is not only an international phenomenon, but thousands of people from all over the world have made it a part of their daily routine.

How did Yoga originate in India?

Yoga has been introduced in India since pre-Vedic times. This has remained a part of the lifestyle of the Indians from the years. Yoga is an important part of Indian culture and civilization in which there are properties of both physical elements of humanity and spiritual uplift. This is the ideal combination of knowledge, karma and devotion. Maharishi Patanjali's contribution to India is important; he has codified and organized yoga postures or practices in the Yoga Sutras.

Why is 21st June chosen for celebrating International Yoga Day?

21 June is the day to pay homage to the Sadgurus. This is also the day of the summer solstice. During the June Solstice, the North Pole is tilted towards the Sun or we can say that when the sun begins to move from north to south. From Yoga's perspective, this time is the transition period, i.e. a better time for meditation. At the time of Sankranti or Uttarayan (around 21st June), the Adiyogi (the first yogi) left towards the south, and first, he saw the 7 royal sages who further became his first disciples. They propagated the science of yoga in many parts of the world.

It is amazing that 21st June marks this important event in human history. This date in the Northern Hemisphere is also the longest day of the year and it has special significance in many parts of the world.
What are the objectives of the International Yoga Day

- Make people aware of the benefits of yoga and connect them with nature.

- To reduce the rate of health-challenging diseases in the world.

- Spreading growth, development and peace throughout the world.

- Making people aware of physical and mental illnesses and providing solutions through yoga.- It also aims to develop a habit of meditation for peace of mind, self-awareness which is necessary to survive in a stress-free environment.

How many hours a person should sleep in a day? On 21 June, 2015, the Indian Prime Minister and around 36,000 people had celebrated the first International Day of Yoga at Rajpath in New Delhi. 21 yoga mudras or yoga postures for 35 minutes was performed there. The ceremony had established two Guinness World Records: the first to be the largest yoga class and secondly the largest number of nationalities from 84 countries participated in the event. This award was presented to the Ministry of AYUSH and received by AYUSH minister Shripad Yesso Naik.

The theme of International Yoga Day 2015 was 'Yoga for Harmony and Peace'. On 21 June, 2016, the AYUSH Ministry organized an event "The National Event of Mass Yoga Demonstration", at Chandigarh, in which Prime Minister Narendra Modi and many other people participated.

The theme of International Yoga Day 2016 was "Connect the Youth".

On 21 June ,2017 at Lucknow in Uttar Pradesh, International Day of Yoga was celebrated where other new records were created. People from around 150 countries participated and the number of participants was up to 51,000.

The theme of International Yoga Day 2017 was "Yoga for Health"

On 21 June, 2018 at Dehradun in Uttarakhand, International Day of Yoga was celebrated. Prime Minister Narendra Modi with around 55,000 enthusiasts performed Yoga.

The International Yoga Day 2018 theme is "Yoga for Peace" which is organised by the permanent mission of India to the United Nations. - If regular yoga practice is done, then all health-related problems can be overcome.

- Yoga not only provides mental peace but also generates a peaceful environment.

- It is also mandatory to do yoga as our lifestyle is changing day by day. It can also help us to deal with climate change.

- Yoga gives strength to the muscles and the whole part of the body.

- The Respiration process becomes healthy; energy and power are also developed in the body via yoga.

- Maintains balanced metabolism in the human being.

No doubt yoga help in reducing the health challenging diseases all over the world. It connect people with each other, helps in practising meditation and in getting relief from stress. It provides a link between the protection of health and sustainable health development. Therefore, we should practice Yoga regularly and make it a part of our life.