World Asteroid Day 2020: It is celebrated on 30 June to spread awareness in public about the asteroid impact hazard. What are asteroids and Tunguska event? Let us have a look at the history and significance of the day. 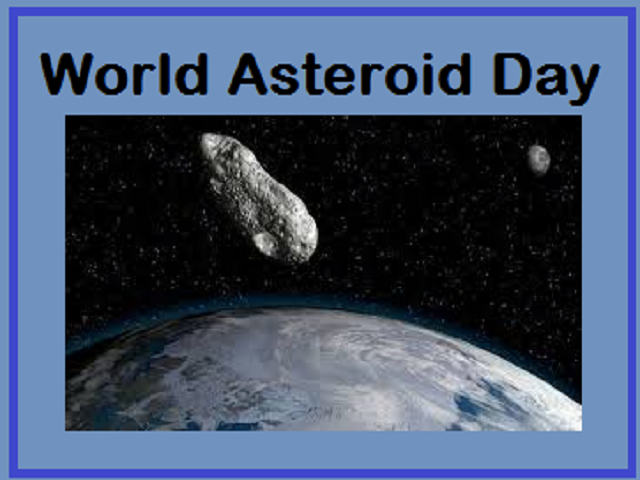 World Asteroid Day 2020: It is also known as International Asteroid Day. The day marks the anniversary of the 1908 Tunguska impact. It also raises awareness about the role of asteroids in the formation of our universe, how their resources can be used in the future, how asteroids provide the way for future exploration, and also how we can protect our planet from the impacts of asteroids.

World Asteroid Day is a global movement to protect our Earth from the impacts of Asteroids. Several events are organised all over the world to educate people about asteroids.

What are Asteroids?
Asteroids are small rocky body that orbits around the sun. Mostly, they are found between the orbits of Mars and Jupiter but some have more eccentric orbits. So, we can say that asteroids are rocky-metallic objects which range in size from about the size of pebbles to around 600 miles across. They are so small that they are not considered as planets but they orbit Sun. They are also known as the leftover material of the Solar System. Do you know that several hundred thousand asteroids are known to exist in our Solar System and many are yet to be discovered? Some asteroids are so small that they are difficult to detect.

What is the difference between Asteroid, Meteor, Meteorite, and Meteoroid?

World Asteroid Day: History
In December 2016, the United Nations General Assembly adopted a resolution A/RES/71/90 and declared 30 June as International Asteroid Day to observe annually the anniversary of the Tunguska impact over Siberia, Russian Federation, on 30 June, 1908 at an international level to raise awareness about the hazardous impact of Asteroids. Let us tell you that the General Assembly's decision was made on the basis of a proposal made by the Association of Space Explorers, which was endorsed by Committee on the Peaceful Uses of Outer Space (COPUOS).

Asteroid Day was co-founded by astrophysicist and lead guitarist of QUEEN Dr. Brian May together with Danica Remy, President of B612 Foundation, Rusty Schweickart, Apollo 9 Astronaut, and filmmaker Grig Richters, to promote awareness and provide knowledge to the general public about the importance of asteroids in the formation of our universe and the role they play in our solar system today.

There is an organisation named B612 that works towards protecting the Earth from asteroid impacts, informing and forwarding worldwide decision making on planetary defense issues.

What if an asteroid was about to hit Earth?

What is Tunguska Impact?
The anniversary of the Tunguska impact is observed on 30 June which is also known as the Tunguska impact. A large explosion occurred on that day in the sky over the Podkamennaya Tunguska River in Siberia, Russia. According to NASA, it was estimated that the asteroid entered the atmosphere of the Earth at a speed of about 33,500 miles per hour. The space rock of 220-million-pound  heated the air surrounding it to 44,500 degrees Fahrenheit. At about 28,000 feet height, the combination of pressure and heat made asteroid fragment and annihilate itself that produces a fireball and energy equal to about 185 Hiroshima bombs was released. The blast flattened an estimated 80 million trees over an area of 830 square miles (2,150 square km) of the forest.

It was thought that an asteroid or a comet was responsible for the blast. This event, Tunguska impact is considered as the largest asteroid impact on the Earth in recorded history.

World Asteroid Day 2019: Events
Various events are organised all over the world. These events are at NASA and other space agency facilities, planetariums, museums, universities, and much more. This year it is celebrated digitally.

According to the press release of Asteroidday.org:

The Asteroid Foundation returns with Asteroid Day LIVE Digital from Luxembourg. This year the celebration goes online, fully digital of asteroid science and exploration. On 30 June 2020, panel discussions and one-on-one interviews with astronauts and world experts will be broadcast.

The topic of discussion for this year is the acceleration in the rate of our asteroid discoveries and why it is set to accelerate even faster, the imminent arrival of samples from asteroid Ryugu and Bennu, the exciting preparations for the joint US-Europe mission to binary asteroid Didymos, and much more.

According to Tom Jones, PhD, veteran astronaut and planetary scientist, and Asteroid Day Expert Panel member "Asteroid exploration missions tell us about the birth of our own planet and reveal how asteroids can serve astronauts as stepping stones to Mars."

In Luxembourg (21 June, 2019) – Scientists and scholars, astrophysicists and engineers, students, and academics gathered in around 192 countries to be part of Asteroid Day, the official United Nations’ day of awareness and education about asteroids and is celebrated around one week. In 2019, the fifth anniversary of Asteroid Day, events focused on the role of asteroids in the formation of our solar system and advances in technology to better detect, track and analyze asteroids and review our ability to deflect a rogue asteroid headed towards Earth. Let us tell you that an Asteroid Day is a program of Asteroid Foundation, a Luxembourg nonprofit organization.

In Europe: There are several organisations like Luxembourg’s Ministry of Education, SpaceResources.lu, and National Museum of Natural History who organise events across the country. The world's largest meteorite collection will be showcased by the Natural History Museum Vienna, Austria. The new Hellenic Meteorite Museum is hosting a variety of events in Greece.

In North America: Several events will be held at the Smithsonian’s National Air and Space Museum in Washington, DC, the Perot Museum of Nature and Science in Dallas, Texas, in addition to other science centers, universities, and astronomy clubs throughout the US, Canada, and Mexico.

In Africa: On National TV (TVM) a special presentation will be hosted by Mozambique about asteroids in coordination with the international Astronomical Unit (IAU), at a special session during the National Astronomical Society Meeting. An event namely “Asteroids and Safety of The Earth” will be hosted by Egypt's Scientific Society of Astronomy and Space at the National Research Institute of Astronomy and Geophysics in Cairo.

In South America: Some groups of astronomical back papers known as Mochileros Astronomicos, will teach across the country about astronomy in several schools, planetariums, and communities. Also, 100 years of the International Astronomical Union will be celebrated in the events organised on Asteroids across Brazil Astronomical institutions.

In Asia: Several lectures and activities are hosted by the Kazakhstan Fesenkov Astrophysical Institute, in Almaty. In Israel also events are organised at the Givatayim Observatory, Netanya Planetarium, and the Yarqa Space Center.

World Asteroid Day or International Asteroid Day raises awareness about the devastating impact of an asteroid when it crashes to the Earth. The role of asteroids in the formation of our universe, how their resources can be used in the future, how asteroids provide the way for future exploration, and also how we can protect our planet from the impacts of asteroids.

Therefore, asteroids are rocky objects that are found orbiting around the Sun and also between the planets Mars and Jupiters. It is necessary to understand about asteroids hazardous impacts. So, for this World Asteroid Day is celebrated across the globe to educate people about the asteroids and their impacts.