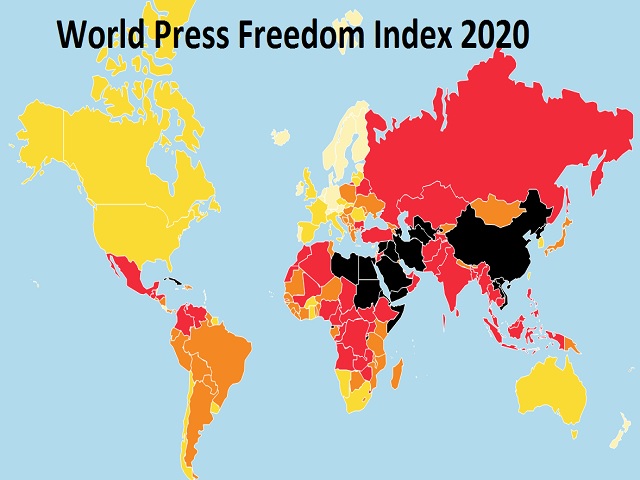 Media is called the fourth pillar of democracy in a democratic country like India. It is believed that whenever a democratic government tries to be autocratic the media comes in the light to safeguard the interests of the citizens and netizens.

About the World Press Freedom Index:-

This freedom index is published annually since 2002 by Reporters Without Borders (RSF). The World Press Freedom Index is an important advocacy tool based on the principle of emulation between states.

In 180 countries, the degree of freedom available to journalists is determined by pooling the responses of experts to a questionnaire that is devised by the RSF. This qualitative analysis is combined with quantitative data on abuses and acts of violence against journalists during the period evaluated.

An online questionnaire has been developed by the RSF to compile the Index and it consists of 87 questions that are focussed on the below-mentioned parameters. It is translated into 20 languages including English, Arabic, Chinese, Russian, Indonesian, etc. The questionnaire targeted media professionals, lawyers, and sociologists who are asked to complete it.

Further, scores are calculated based on the responses of the experts selected by the RSF combined with the data including abuses and violence against journalists during the period evaluated.

The ranking of the participating countries is done based on some parameters.

The parameters to decide the Press freedom include:-

5. Transparency in the news

6. Quality of the infrastructure that supports the production of news and information

2. Norway is ranked top in the Index for the fourth consecutive year while Finland and Denmark in second and third place.

6. Top 5 positions are occupied by the European Countries namely Norway, Finland, Denmark, Sweden, and the Netherlands.