Sparrows are beautiful birds with smooth, round heads and rounded wings. They have beautiful voices, their chirping and singing sound heard all over. A special day is dedicated to these beautiful birds known as World Sparrow Day. It is celebrated on 20 March. Let us read in detail about this day! 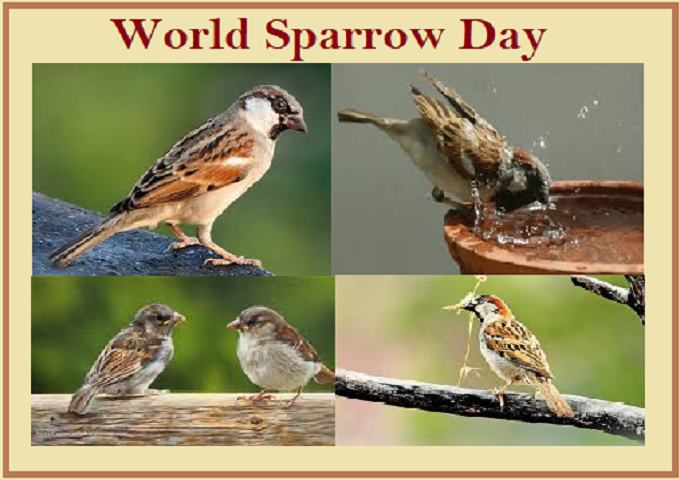 World Sparrow Day is celebrated to raise awareness about sparrows and other common birds affected by the environment which are on the verge of extinction.

In our childhood, during bedtime or during meals we all listen to stories about sparrows, monkey and fox, king, queen etc. by our grandparents and parents. Earlier, mostly we wake up by the melodious chirping of sparrows but these common house sparrows are on the verge of extinction today. It is said that now sparrows are just a memory. Due to large and huge towering buildings, natural flora and fauna are disturbed and this ubiquitous bird is now, no longer a common sight.

On 20 March, World Sparrow Day is observed every year to raise awareness. We hope that on this day individual, various government agencies, scientific communities would come up with the measures to save them. In this way we will be able to save biodiversity also. It is necessary to find out the reason why our oldest companions are on the verge of extinction.

World Sparrow Day is celebrated on 20 March every year in many countries around the world. Every year celebration is organised according to the theme. The theme for World Sparrow Day is "I LOVE Sparrows" and is pictured like " I ♥ Sparrows". It is a hope that with this theme more people will join several events and campaigns to protect the sparrows. We all have some kind of special bond with sparrows since our childhood. Theme “I Love sparrow” will remind people the love and bond with sparrows and encourage them to come forward.

World Sparrow Day: History
Do you know that first World Sparrow Day was celebrated on 20 March 2010? After that, every year this day is celebrated all over the world to raise the awareness about house sparrows and other common birds affected by the environment  The Nature Forever Society (NFS) in India started an international initiative to celebrate World Sparrow Day. This Society works in the collaboration with Eco-Sys Action Foundation from France. The Nature Forever Society was founded by an Indian conservationist Mohammed Dilawar who started his work helping the house sparrows in Nasik. For his efforts, he was named "Heroes of the Environment" for 2008 by TIME Magazine.

Interesting facts about Sparrows
1. Do you know that there is a main difference between male and female sparrows? Female have brown backs with stripes while the male has reddish backs with black bibs. Also, a male sparrow is slightly larger than female.

3. If they sense danger, they can swim at a fast pace.

4. Sparrows are not territorial in nature; they are protective and build their nests.

6. The house sparrow (Passer domesticus) is a bird of the sparrow family Passeridae.

7. House sparrows can live in urban or rural settings as they are strongly associated with human habitations.

8. They are found in widely varied habitats and climates, not in woodlands, deserts, forests and grasslands.

9. The average life expectancy of the wild sparrow is under 10 years and mainly closer to 4 to 5 years.

10. The flight of house sparrows is direct with continued flapping and no periods of gliding, averaging 45.5 km/h (28.3 mph) and about 15 wingbeats per second.

So, now we come to know that World Sparrow Day is observed on 20 March every year around the world to raise the awareness among the people and countries to save these social chirping birds which are on the verge of extinction.