World Theatre Day is celebrated every year on 27 March to highlight the importance of theatre as nowadays it is losing its importance. Let us have a look at the history of World Theatre Day, its 2020 theme, and significance. 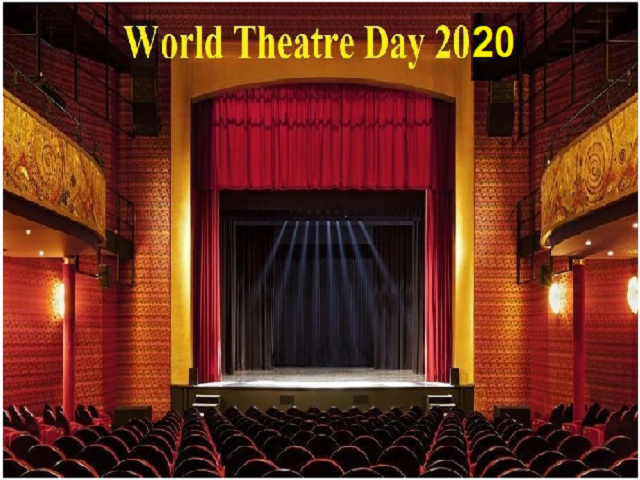 World Theatre Day raises the importance of theatre arts, how they played an important role in the field of entertainment and the changes that theatre brings in life. Message from renowned Theatre artist is given to reflect the theme of Theatre and a Culture of Peace.

As we know that the theatre is a combination of various forms of fine arts that uses live performers, actors or actresses to present before a live audience about the real experience in a specific place or maybe on a stage. Nowadays the importance of theatre is declining so this day is a wake-up call for governments, politicians, institutions, and people to recognise the value of theatre to the individual, people for economic growth as well. Let us study about World Theatre Day, its history, events, celebrations, importance etc. through this article.

International Theatre Institute (ITI) initiated in 1961 to celebrate World Theatre Day across the world to value and importance of theatre. On this day, ITI host a yearly message, spoken by a chosen famous theatre performer, to share their views about the art of theatre and its future. In 1962, the first message was spoken by Jean Cocteau in 1962. Do you know that this message is translated into over 50 languages and printed in hundreds of newspapers? Through several institutions, this message was broadcast to all corners of the world. ITI has more than 85 centres throughout the world; it also encourages colleges, schools, theatre professionals to celebrate this day.

The goals of World Theatre Day, as with International Dance Day are:
- To highlight the importance of art form around the world.
- To make people aware of the importance of the value of art form.
- To enable the dance and theatre communities to promote their work on a broad scale. To make aware opinion leaders about the value of these forms and support them.
- To enjoy the art form for its own sake.

On this day several national and international theatre events are organised. Annually celebrated by the ITI centers and the International theatre community. A celebrated figure of the theatre is also invited by ITI who speaks and motivates people about the theme of Theatre, a culture of peace and circulate the message in the whole world. The author of the Message of the World Theatre Day 2020 is Shahid Nadeem, Pakistan. He is a Pakistan's leading playwright and head of the renowned Ajoka Theatre.

He was born in 1947 in Spore, Kashmir. At the age of 1, he became a refugee when his family had to migrate to the newly created Pakistan after the 1948 war between India and Pakistan over the disputed state of Kashmir. He did his Masters in Psychology from the Punjab University. As a university student, he wrote his first play. He became a dedicated playwright when he started contributing from his political exile in London, plays for Pakistan's dissident theatre group, Ajoka. It was set up by Madeeha Gauhar, a pioneer theatre activist. He later married to her. Shahid Nadeem has written more than 50 plays in Punjabi and Urdu languages and various adaptations of Brecht's plays.

It is a great honour for me to write the World Theatre Day 2020 Message. It is a most humbling feeling but it is also an exciting thought that Pakistani theatre and Pakistan itself, has been recognized by the ITI, the most influential and representative world theatre body of our times. This honour is also a tribute to Madeeha Gauhar, theatre icon and Ajoka Theatre founder, also my life partner, who passed away two years ago. The Ajoka team has come a long, hard way, literally from Street to Theatre. But that is the story of many a theatre group, I am sure. It is never easy or smooth sailing. It is always a struggle.

I come from a predominantly Muslim country, which has seen several military dictatorships, the horrible onslaught of religious extremists and three wars with neighbouring India, with whom we share thousands of years of history and heritage. Today we still live in fear of a full-blown war with our twin-brother neighbour, even a nuclear war, as both countries now have nuclear weapons.

We sometimes say in jest; “bad times are a good time for theatre”.  There is no dearth of challenges to be faced, contradictions to be exposed and the status quo to be subverted. My theatre group, Ajoka and I have been walking this tightrope for over 36 years now. It has indeed been a tight rope: to maintain the balance between entertainment and education, between searching and learning from the past and preparing for the future, between creative free expression and adventurous showdowns with authority, between socially critical and financially viable theatre, between reaching out to the masses and being avant-garde.  One may say that a theatre-maker has to be a conjurer, a magician.

In Pakistan, a clear division has existed between the Sacred and the Profane. For the Profane, there is no room for religious questioning, while for the Sacred, there is no possibility of open debate or new ideas. In fact, the conservative establishment considers art and culture out of bounds for its “sacred games”. So, the playing field for the performing artists has been like a hurdles race. They have to first prove their credentials as good Muslims and compliant citizens and also try to establish that dance, music and theatre are “allowed” in Islam. A large number of observant Muslims have hence been reluctant to embrace the performing arts even though the elements of dance, music and theatre are embedded in their daily lives. And then we stumbled on a sub-culture which had the potential to bring the Sacred and Profane on the same stage.................

In 2019 Carlos CELDRAN from Cuba, is an award-winning and highly esteemed theatre director, playwright, academic and professor, living and working in Havana, Cuba and present his work all over the world has been selected for the message 2019.

Message by Carlos CELDRAN for World Theatre Day 2019 is
“Before my awakening to the theatre, my teachers were already there. They had built their houses and their poetic approach on the remains of their own lives. Many of them are unknown, or are scarcely remembered: they worked from silence, in the humility of their rehearsal rooms and in their spectator-packed theatres and, slowly, after years of work and extraordinary achievement, they gradually slid away from these places and disappeared. When I understood that my personal destiny would be to follow their steps, I also understood that I had inherited that gripping, unique tradition of living in the present without any expectation other than achieving the transparency of an unrepeatable moment; a moment of encounter with another in the darkness of a theatre, with no further protection than the truth of a gesture, a revealing word.

My theatrical homeland lies in those moments of meeting the spectators who arrive at our theatre night after night, from the most varied corners of my city, to accompany us and share some hours, a few minutes. My life is built up from those unique moments when I cease to be myself, to suffer for myself, and I am reborn and understand the meaning of the theatrical profession: to live instants of pure ephemeral truth, where we know that what we say and do, there under the stage lights, is true and reflects the most profound, most personal, part of ourselves. My theatrical country, mine and that of my actors, is a country woven from such moments, where we leave behind the masks, the rhetoric, the fear of being who we are, and we join hands in the dark.

Theatrical tradition is horizontal. There is nobody who may affirm that theatre exists at any centre in the world, in any city or privileged building. Theatre, as I have received it, spreads through an invisible geography that blends the lives of those who perform it and the theatrical craft in a single unifying gesture. All masters of theatre die with their moments of unrepeatable lucidity and beauty; they all fade in the same way, without any other transcendence to protect them and make them illustrious. Theatrical teachers know this, no recognition is valid when faced with that certainty which is the root of our work: creating moments of truth, of ambiguity, of strength, of freedom in the midst of great precariousness. Nothing survives except data or records of their work in videos and photos that will only capture a pale idea of what they did. However, what will always be missing from those records is the silent response by the public who understands in an instant that what takes place cannot be translated or found outside, that the truth shared there is an experience of life, for a few seconds, even more diaphanous than life itself.

When I understood that the theatre was a country in itself, a major territory that covers the whole world, a determination arose within me, which was also the realisation of a freedom: you do not have to go far away, or move from where you are, you do not have to run or move yourself. The public is wherever you exist. You have the colleagues you need at your side. There, outside your house, you have all the opaque, impenetrable daily reality. You then work from that apparent immobility to design the greatest journey of all, to repeat the Odyssey, the Argonauts’s journey: you are an immobile traveller who does not cease to accelerate the density and rigidity of your real world. Your journey is toward the instant, to the moment, toward the unrepeatable encounter before your peers. Your journey is toward them, toward their heart, toward their subjectiveness. You travel within them, in their emotions, their memories that you awake and mobilise. Your journey is vertiginous, and nobody may measure or silence it. Nor may anybody recognise it to the right extent, it is a journey through the imagination of your people, a seed that is sown in the most remote of lands: the civic, ethical and human conscience of your spectators. Due to this, I do not move, I remain at home, among my closest, in apparent stillness, working day and night, because I have the secret of speed.”

We can't deny the importance of plays and theatres. Theatres plays an important role since Greeks but nowadays its role is declining. To make people aware about the importance of theatre, artists World Theatre Day is celebrated.