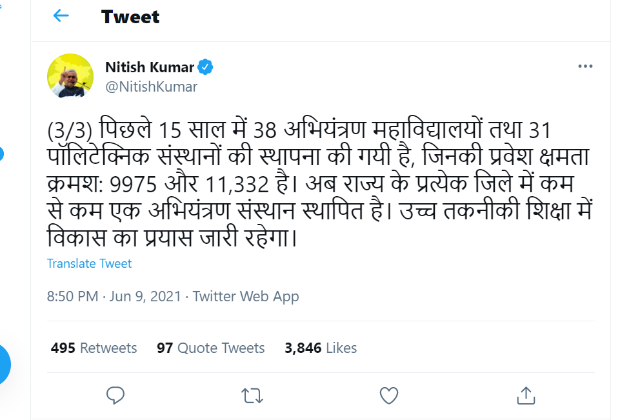 As per his statement, "In the last 15 years, 38 engineering colleges and 31 polytechnic institutes have been established, with admission capacity of 9,975 and 11,332 respectively. Now every district of the state has at least one engineering college. Efforts will continue for the advancement of higher technical education in the state."

Nitish Kumar further said that he converted Bihar College of Engineering, Patna, which is one of the oldest engineering colleges in the country, into an NIT (National Institute of Technology) in 2004 when he was in the Centre.

The Bihar government is planning to establish a state-level university for engineering and medical education. "The establishment of engineering and medical universities in Bihar will give a boost to technical education in the state. The management and education in these colleges will also improve," CM Nitish Kumar said. " He further said his government was committed to ensuring there was a sufficient number of medical and engineering colleges so that boys and girls interested in these disciplines did not feel compelled to migrate to other states for their studies.

Earlier, in a major move, Bihar Chief Minister Nitish Kumar has announced that one-third of the seats in the state's medical and engineering colleges will be reserved for female students. The reservation will be for the girls who are domicile of Bihar. The state government is already providing 35% reservation for females in all state government jobs. The reservation for girls in the technical colleges will encourage them to take admissions in these colleges and increase the enrolment ratio of girls.