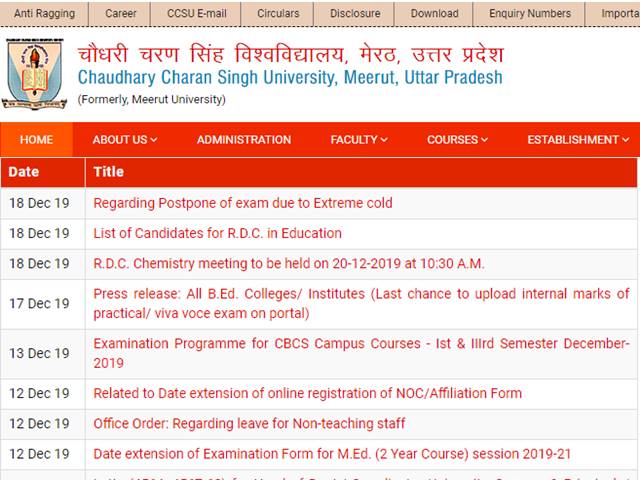 CCSU Exams Postponed: Chaudhary Charan Singh University has decided to postpone all the exam scheduled to be held today due to the intense cold-wave conditions prevailing in North India. As per the latest update, the CCSU Exams which were scheduled to be held on 19th December 2019 – Thrusday have been called off today by the University. The varsity confirmed that development through an official notification published on its website late evening on Wednesday. While the university has postponed the on-going exams, no new dates have been assigned for the exams.

New Dates to be Announced Soon

Currently, the official notification published by the CCSU Administration has only confirmed that the exams have been cancelled for today. However, the notification has not confirmed the new or revised dates for the delayed examination. As per sources close to the university administration, the new or revised dates for CCSU Exams will be announced soon by the University.

Schools Closed in Many Districts of UP

UP Government has announced closure of schools in various districts of the state following the intense cold-wave and the harsh weather conditions. All schools, both government and private, have been ordered to remain closed for next two days i.e. on Thursday and Friday due to harsh weather. Many schools in Lucknow district have been ordered to change their school timings from morning to afternoon hours to make it easier for students to attend classes.