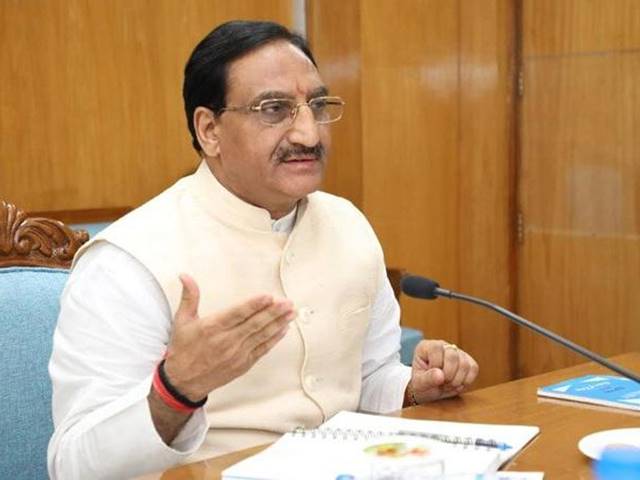 Union Education Minister  Ramesh Pokhriyal conducted an interactive webinar session with the students from Kendriya Vidyalayas today. The webinar was conducted on Twitter and Facebook at 12 Noon where students asked questions to the education minister by tweeting #eduationministergoeslive.

When asked by the students on the best way to achieve success, the education minister stated that this is a question that has to be posed to oneself which will help in preparing the students for their target in a better way. He also pointed out that the students will be able to address their shortcomings.

While concluding the webinar, the education minister answered the queries of the students of Kendriya Vidyalaya. Answering queries regarding the reopening of the schools, the minister added that the schools will reopen soon considering all the necessary precautionary measures.

Although Mr. Pokhriyal has not announced any shared the detailed agenda for the live webinar being held on 18th January, sources have confirmed that he will take this opportunity to answer any exam-related queries of the students. During the Shiksha Samvad, Education Minister is likely to address queries about the upcoming exams including the exam syllabus, mental and physical health of students.

How to Ask Questions?

The webinar is being held exclusively for students who are studying at Kendriya Vidyalaya Schools across the country. Moreover, like earlier webinars, Education Minsiter Ramesh Pokhriyal has also asked students from KVs to put forth their concerns, suggestions and queries using #EducationMinisterGoesLive. The common queries of the students received by the minister would be answered by him in the webinar.

Prior to this, the Education Minister has held three webinars in which he interacted with students and parents who are due to appear for the CBSE Board Exams 2021. In the latest live interaction, Mr Pokhriyal informed that CBSE Board Exam 2021 for Class 10 and 12 students would be held from 4th May to 10th June 2021. Prior to this, he had also announced dates for JEE Main 2021 engineering entrance exam and also announced the 4 attempts that were introduced as part of the examination process.