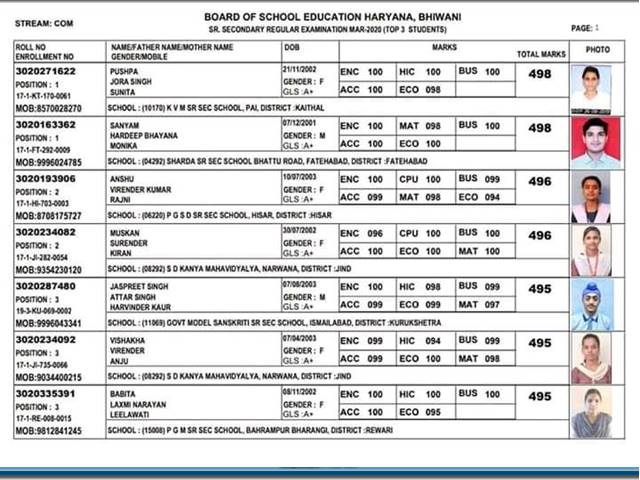 HBSE 12th Toppers List 2020 Released: Today at 5 PM in the evening, The Board of Secondary Education, Haryana (BSEH) announced Haryana 12th Result 2020 for Senior Secondary Students. Along with the results, the board also published the detailed merit list or toppers list for Class 12 Board Exams 2020. Reports coming in from Bhiwani office of the Haryana Board have confirmed that the girls have dominated the HBSE 12th Result 2020 announced today. The overall pass percentage for Class 12 Results stood at 80.34%. However, in the gender-wise comparision, girls managed to out perform boys. Girl students secured an overall pass percentage of 86.30% as compared to 75.06% among the boys. On similar lines, the stream-wise toppers and merit list for Arts, Commerce and Science streams were also dominated by girl students. Mainsha from Mohindergarh district emerged as the state topper and Arts stream topper with 499 marks.

Get the complete Stream-wise Haryana Board Class 12 Toppers List Here.

Manisha from Mohinderghar district has emerged as the overall state topper and also as the topper of the Arts stream by securing an overall score of 499 marks. She is closed followed by Monika and Amandeep Kaur in the 2nd place with 497. The third spot of HBSE 12th Arts Toppers List 2020 is secured by Varsha from Rewari, who has scored 495 marks.

Coming to Science stream, there are in total 10 students who have featured in the BSEH Class 12 Science Toppers List 2020 or Merit List. The top position in Science stream is secured by Bhawna Yadav from Rewari who has secured 496 marks.