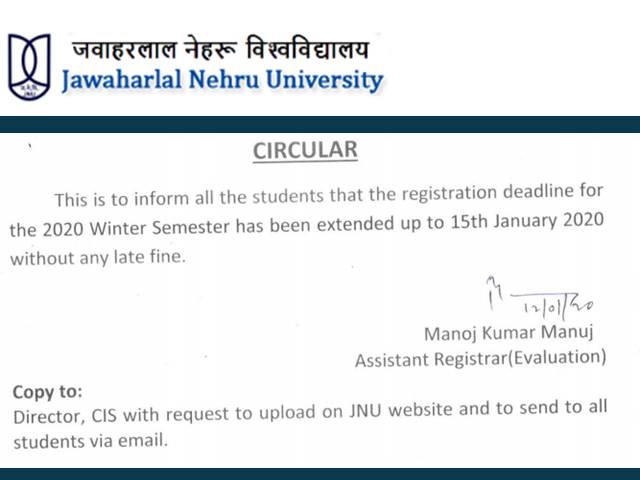 According to the official circular released by the JNU administration, the final date for registration for winter session has been extended by the university without any late fee. This means that students who have until now not registered for the winter session, will now be able to do so without paying any extra fee for the same. The official circular was signed by JNU assistant registrar Manoj Kumar Manuj on 12th January 2020. A copy of the circular confirming the extension in JNU winter session registration deadline has also been upload on the official website of the jnu i.e. jnu.ac.in.

Earlier on 5th January 2020, the last day of winter session registration, violence broke out on campus as masked mob attacked students and faculty members of the university in the evening. The attack saw JNUSU president Aishe Ghosh get serious injuries for which she was treated at AIIMS. Media reports have claimed that the masked mob consisted of several members of ABVP – the student wing of RSS and BJP. On the other hand, counter allegations have also been levelled by BJP and others suggest that Left Union students indulged in violence and damaged the CIS Centre and Server Room to stop registration process as part of their anti-fee hike protests.