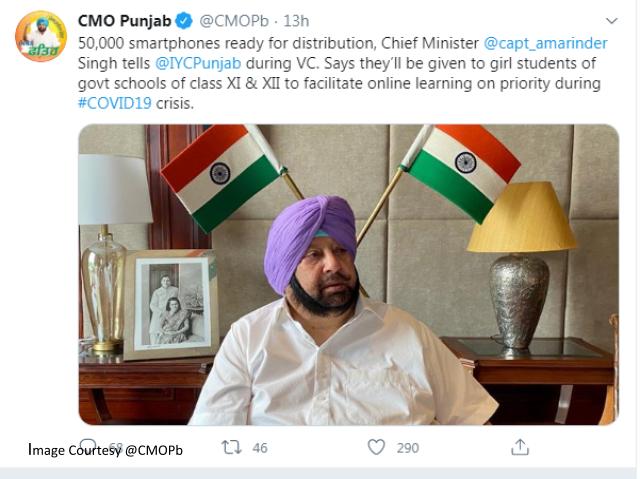 The Punjab state government will be distributing smartphones to the girls from class 9 to 12 in the state. According to reports, 50,000 smartphones will be provided to the students from government schools to help in online learning during the pandemic.

Punjab State Chief Minister Amarinder Singh will be distributing the smartphones to the students. The chief minister announced the same on social media stating that 50,000 smartphones are ready for distribution to the girl students from classes 9 to 12 in Government schools in the state. He added that the phones will be provided to the students to facilitate online learning which is property during the times of the pandemic.

With the pandemic spreading across the country, schools across the country have remained shut until further notice since March 2020. The reopening dates for the schools have not yet been decided by the center or the respective state governments. The decision for schools and colleges to reopen is expected to be taken by September after analyzing the situations in the respective state.

The Punjab state government has also directed the private schools in the state not to impose books, published by private publishers on the students studying in the schools. According to an official press release, the Punjab state government has also recommended that private schools use books published by the certified institutes.

Universities across the country have been asked to complete the final semester exams by September 2020 by the UGC while the intermediate semester students will be promoted to the next academic year based on the previous semester/year marks.