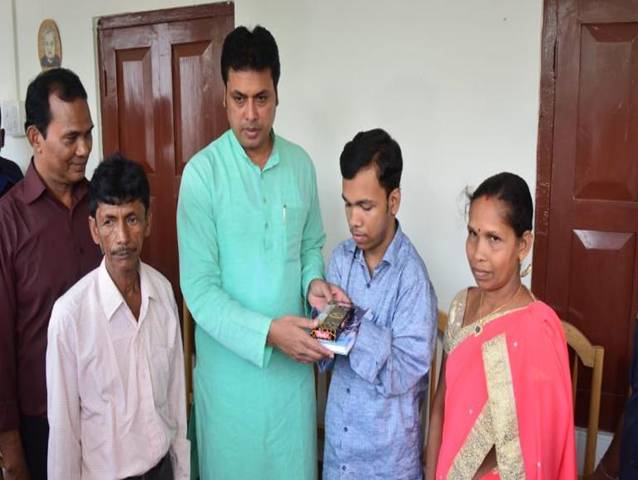 TBSE Madhyamik Result 2019: The Chief Minister of Tripura Bipal Kumar Deb announced that the state government will be bearing all the education expenses of Pralay Dey, a physically challenged student from the state who secured first division in his class 10 examination. Pralay Dey who was born with deformed hands used his leg to write his class 10 board examination to secure first division marks in his examination. A resident of Gomati District, Prayal was recently felicitated for his remarkable achievement by the Chief Minister.

The Chief Minister after meeting the boy told reporters that a stipend for Divyang students’ scholarship, free higher education, and other facilities will be provided to Pralay. He added that the state government will bear all the expenses of the boy. The chief minister who was moved by the young boys' determination said that Pralay is a living example of the English proverb ‘where there is a will there is a way’.

Pralay was born with his hands folded backward and when he was barely 15 days old his hands were plastered as part of a treatment for the next three and a half years. Sujan Kumar Dey Pralay’s father is a daily wage labourer while his mother Putul Guha Dey us a helper at an Anganwadi (ICDS) centre. In spite of writing his exams with the help of his feet, Prayal secured first division by scoring 346 marks with a distinction in two language papers.

Pralay made sure not to let his disability define his capabilities and used his limb to write the exam instead of using any writer. He trained himself so well in writing with his leg that today he is as good as others who do it with their hands. He faces challenges head-on with full confidence. Pralay dreams of studying Humanities and wants to become an English Professor in the near future.

Speaking to reporters, Pralay's said that his mother works at ICDS while his father is a daily wage labourer which means that financially it is tough for them to continue his education. He added that he feels inspired when he sees his teacher which is why he wanted to enter into the teaching profession. Pralay’s mother who is worried about the financial condition of the family worries about how to meet the educational expenses of her son and daughter who just appeared for her BA final examination.

While elaborating about Pralay’s journey, Putul recalls that when her son was born they were all worried about how they were going to manage to look after him. Earlier she adds that it was very tough for her but soon Pralay started writing with his legs and was doing well. She added that his teachers and friends helped him a lot because of which he never wanted to miss school.